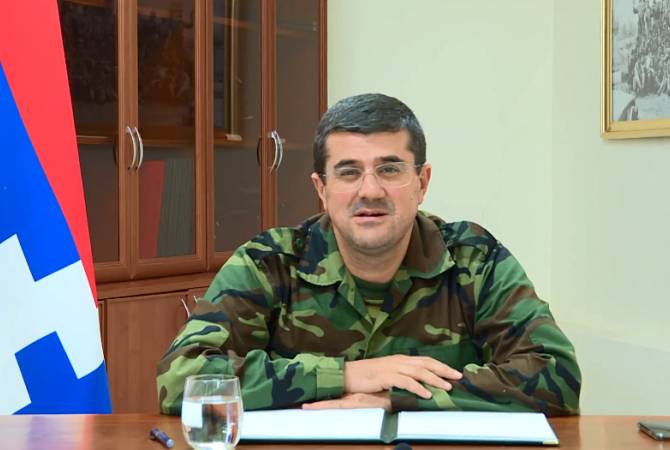 Armenpress. All countries of the world have their share of responsibility of making Turkey’s plan to make Azerbaijan a terrorist hotbed in the South Caucasus region a failure, ARMENPRESS reports Artsakh’s President Arayik Harutyunyan wrote on his Facebook page.

”Today Artsakh and Armenia have appeared in the frontline of fight against international terrorism in the true sense of the word. But in our case, the difference is that this enemy threatening the global civilization has challenged our Motherland hidden under the flag of a UN member state, together with the regular army of that country and very often instead of that regular army. In the modern world, there is nothing that can be hidden from anyone, everyone has seen and recorded the infiltration of the international jihadist terrorist network into Azerbaijan. No country in the world has any more doubts that the target of this monstrous terrorist network are the civilians of Artsakh and Armenia, our cities and villages, our right to live free, and decide our fate.

Turkey, which continuously nourishes and controls this network, with the consent of Azerbaijan’s opportunistic leadership, uses Azerbaijan as a tool for creating a new hotbed of international terrorism in the South Caucasus region. I am confident that any participant in global politics, be it a state or international organization, well understands the dangerous consequences of such developments. We still remember the consequences of the aspiration of the jihadist gangster groups to create a state-like entity in Iraq and Syria. All countries of the world have their share of responsibility of making Turkey’s plan to make Azerbaijan a terrorist hotbed in the South Caucasus region a failure.

Armenia and Artsakh are today in the frontline of the struggle because they accepted the challenge with dignity. And we will struggle until the final victory. But this is not only the problem of Artsakh and Armenia.

As a President of a country struggling for its independence, I call on the civilized world to have active participation in this struggle.

The creation of an effective coalition against international terrorism is imperative.

I am confident in our victory’’, President of Artsakh Arayik Harutyunyan said.

Turkey Wants To Carry Out Another Genocide, Armenian President Says