Turkey Wants To Carry Out Another Genocide, Armenian President Says 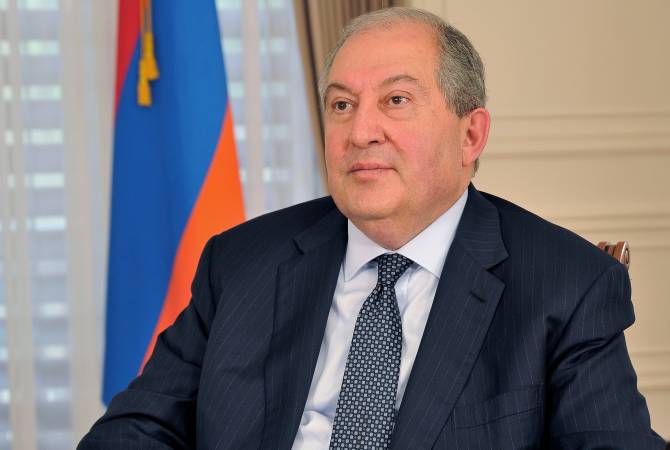 Becky Anderson: So, to know about the conflict we now joined the Armenian president Armen Sarkissian, he is speaking from Armenia’s capital Yerevan. He is talking about the attacks against its cities regionating from Armenia itself to Nagorno-Karabakh.

President Sarkissian: Well, unfortunately, this is a war started by Azerbaijan against the people of the Republic of Nagorno-Karabakh [Artsakh] and this is not a usual war we are seeing. I mean, these are not short conflicts for a day or two or three or four that have been happening during 26 years after the first war on Nagorno-Karabakh, which ended with a ceasefire in 1994. What is different here is the scale and it is already on the seventh day (it is coming the eight day) of the conflict because a week ago Azerbaijan started a war on Sunday, and there are already some clear results of that. First of all, this conflict of seventh days has shown that Azerbaijan is not gaining anything strategically, except creating a big mess and thousands of people that are killed on both sides. Secondly, this conflict is dramatically different from the previous clashes, which were happening between Azerbaijan and Nagorno-Karabakh, supported by Armenia. It is now happening with the open support by Turkey with its military officers, generals, mercenaries, and terroristic Jihadists who are brought in thousands to Azerbaijan to fight against Nagorno-Karabakh, and Turkey with its military might is pretending that they are there just to protect some international, logistic structures.

Becky Anderson: We will get to Turkey and I just wanted to establish what is going on, even if the entire responsibilities falls on Azerbaijan, many people disagree and say that Armenia provoked them.

President Sarkissian: I think there is no logic in saying that Armenia has provoked it because in 1994 the people of Nagorno-Karabakh basically won the war and claimed again for our independence that was taken from us for 70 years of the Soviet rule by forcefully connecting us to Azerbaijan by Josef Stalin. And then, with the breakdown of the Soviet Union we started to claim, similar to many other nations, our self-determination to rule our own life. Since then, there were negotiations for 26 years after the ceasefire and the platform of that negotiations was one of the best or the highest in the world; this is the OSCE Minsk Group, co-chaired by the United States, Russia and France. These peaceful negotiations were basically creating some trust between the sides and eventually talking about the future status of Nagorno-Karabakh. However, a week ago for this or that reason, the Azerbaijani side is claiming that they see no progress in negotiations and claim that this is about the territorial integrity. What is a territorial integrity for a piece of land that was given to them by the Soviet Union to keep it for 70 years, while Armenians of Nagorno-Karabakh lived there for thousands of years? For people of Nagorno-Karabakh this is a fight for life because they have been fighting against Genghis Khan, Lenk Timur and the others for thousands of years, now it is about having a peaceful life on their own land.

Becky Anderson: How about that the Azerbaijani president said just yesterday “Azerbaijan will not let anyone to conquer Nagorno Karabakh, which is an Azeri territory, we must return, we will return it from Armenian occupation. He says “Azerbaijan will not cease military actions untill you don’t set a timetable for withdrawing frits”. Are you willing to do that?

President Sarkissian: Well, I think, first of all, addressing it to the Republic of Armenia is a wrong appeal as they have to appeal to Nagorno-Karabakh or Artsakh as we call it, because their dispute is with this people. Now, this is not about Armenia occupying a territory. This is a territory that even under the Soviet rule, when it was part of Soviet Azerbaijan for 70 years, the absolute majority, I mean 95% of the population, were Armenians because they have been living there for thousands of years. How can anybody occupy a territory that you are living for thousands of years? So, this is not the right appeal…

Becky Anderson: Azerbaijan’s Military Defence said today that they have recorded rockets at Azerbaijan from starting positions of Armenia. How would you explain this, sir?

President Sarkissian: I don’t have to explain because that is not true, and in reality, the radar systems, computers and everything have been recording all the time how they were shelling the civilian population and the city of Stepanakert, villages and so on, from the Azerbaijani territory, and, in fact, what we have also recorded it is the activity of thousands of mujahideen terrorists, and we have also recorded basically Turkish F-16 being involved and their drones being massively involved. So, the short answer is that this is fake news.

Becky Anderson: Your Prime Minister spoke with the US national security advisor Robert O’Brien on Thursday about Turkey’s role in the intensifying conflict. What was the outcome of that talk and is the US offering any support?

President Sarkissian: Well, there was a call, as you know, by the three Co-Chairs of the Minsk Group on the presidential level of relevant countries: the President of the United States, the President of France and the President of the Russian Federation who called upon the sides for a ceasefire. I fully support this call of the three Presidents but the key issue here is that if there were only these two sides-the Azeri side and the Republic of Nagorno-Karabakh with its population plus Armenia that is supporting Nagorno-Karabakh-then there would be a chance for future ceasefire and coming to the negotiating table. But as we have the Turkish component, it destroys everything.

Becky Anderson: The New York Times is reporting that the Prime Minister says of the US that nothing is being done to stop Turkey from American-made F-16 against ethnic Armenians. So, what is the response from Washington?

President Sarkissian: You are asking me something that is probably up to the US President’s National Security Advisor to answer this question. I openly spoke about this to the big multinational community, to many Presidents, Prime Ministers of different countries, asking them to interfere and put pressure on Turkey to stop it to interfere in the region because their interference is leveling the conflict up in magnitude, in complexity, and also creating something that eventually will become another Syria of Caucasus. If it becomes a place like Syria, then God help everybody. God help Europe, God help Central Asia. It will affect everybody including Turkey, Iran and Russia. So, my plea is if Turkey is restrained with the help of Russia, US and France, then we have a chance of a ceasefire and further negotiations, maybe peacekeepers, and a chance to going back to the negotiation table. Because there is no military solution to this conflict, there can only be peaceful, and diplomatic solution. To be honest, the Turkish involvement in this gives feeling to everyone not only in Nagorno-Karabakh, Armenia but everywhere where are Armenians, and those people who are close to the Armenians, that Turkey wants to repeat something that happened 105 years ago-ethnic cleansings of Armenians from their homeland-and creating another genocide.

Becky Anderson: Turkey is denying the genocide. I wonder you asked US for help on Thursday just before Trump was tested positive for COVID-19, do you think he wants his eyes off of this conflict? Does that worry you?

President Sarkissian: I don’t believe that Washington has its eye off of what is happening in the Caucasus because this is a crucial area. It is not only an important crossroad for many things but also in terms of a supply of hydrocarbons and the humanitarian side, and contains vital interests of many states. You spoke about the COVID-19 in the context of the President of the United States. So, let me take this opportunity to wish the President and the first lady good health and quick recovery because that is very is important not only for the Armenians but also for the elections in the US. By whishing health, we are hoping the US pays very serious attention to what is happening in the region. When you say Turkey is denying the genocide you can just look what the US Senate has decided, and countries like France, Russia and many other countries who have acknowledged what historically has happened. But also look at what is happening in the region; Turkey is involved in Libya, it was involved in Egypt, it has crossed the border and invaded Iraq and Syria, it is bullying people and countries in the Mediterranean, it has now tensions with Greece and Cyprus and now it is Karabakh, Azerbaijan and Armenia. The presence of Turkey in Azerbaijan and its involvement make a big change.

Becky Anderson: Turkey’s foreign minister said that Armenia should immediately withdraw from this region. Will NATO be on the side of the Armenian forces? You have accused Turkey in bringing Syrian fighters to fight on Azerbaijani side, what evidence do you have about that, sir?

President Sarkissian: I am asking my colleagues both in NATO and also NATO member Turkey, when they were signing an agreement to join NATO, did that agreement allow Turkey to interfere in third party conflict regardless the reason they claim: ethnicity, [alleged] PKK fighters or protection of international energy pipelines? This is a nonsense, because Armenians of Nagorno-Karabakh never have hit it. If they wanted to do so, they could have done this 20 years ago by stopping Azerbaijan to make billions of dollars, which were then used to buy armaments with which they now kill Armenians in Nagorno-Karabakh. That is one point. Secondly, I think we have to appeal, first of all, to bring this conflict back to the table of negotiations and to have a peaceful resolution. And the table of negotiations should not have Turkey around it. Turkey should withdraw from Azerbaijan and stop supporting them, because it becomes just another side of the conflict. Is NATO ready to accept that a NATO member is in war against Armenia? Neither Armenia, nor Azerbaijan are NATO members. We have a sort of partnership with NATO. And a NATO member is interfering.

Becky Anderson: What about evidence regarding sending Syrian fighters?

President Sarkissian: The evidence about Syrian fighters is open, it is on the internet, and the Government has provided all the necessary information. If you want, I can ask the Government to physically send it to you or your representative, if you have not seen them. It is obvious, there are video and audio recordings, captured people, and many other things. What else one needs to consider it as a clear evidence? And also, they did not come on their own.

Becky Anderson: What about Russia? What can Russia do?

President Sarkissian: Russia has allied relations both with Armenia and Azerbaijan. And again, we hope that Russia as a key member of the Minsk Group Co-Chairs will exercise a pressure first of all on Turkey. My formula is pretty simple: we need to exclude Turkey from this conflict militarily and politically. I do not know how on earth, there is shelling, there is fighting and Turkey is giving a sort of responses, organizing press-conferences, as if they are a side of the conflict. If Russia can put pressure, and then after that, the three Co-Chairs advising Azerbaijan, Nagorno-Karabakh and Armenia to stop hostilities, I think it will work, and I hope it will work, and we will go back to the negotiations.

Becky Anderson: Thank you so much, sir. This was a very important speech.