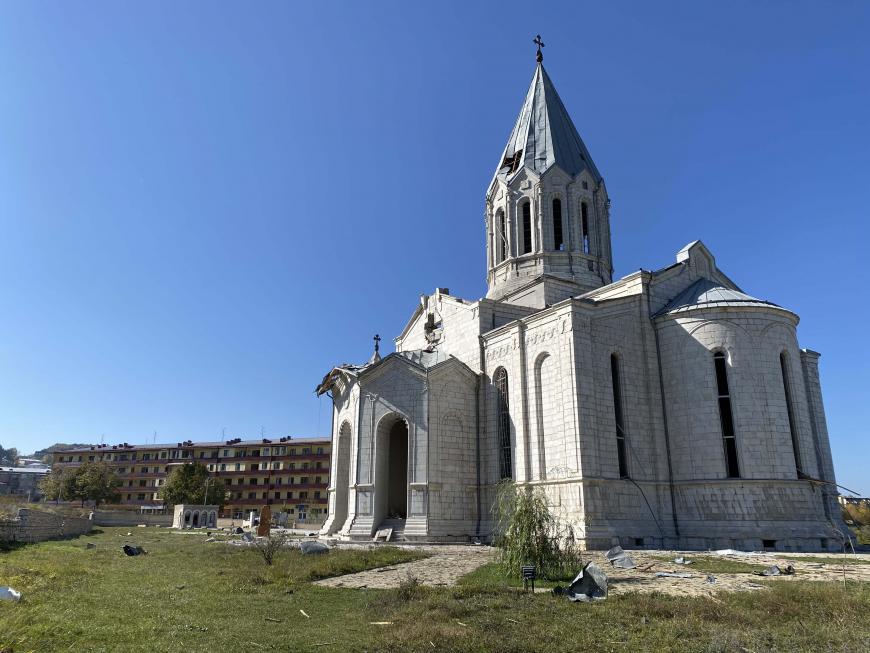 Ghazanchetsots Cathedral, built in the 19th century and an important building for the Armenian Aposotlic Church, after it was struck twice in the afternoon on October 8. Damage to the roof south of the main dome can be seen as well as debris on the church grounds.  © 2020 Human Rights Watch

(Human Rights Watch)- Azerbaijani forces attacked a church in the city of Shushi on October 8, 2020 during the Nagorno-Karabakh hostilities, in what appears to be a deliberate targeting in violation of the laws of war, Human Rights Watch said today.

Two separate attacks, hours apart, on the Ghazanchetsots Cathedral on October 8 in the town of Shushi, also known as Shusha, suggest that the church, a civilian object with cultural significance, was an intentional target despite the absence of evidence that it was used for military purposes. Weapon remnants Human Rights Watch collected at the site corroborate the use of guided munitions. President Ilham Aliyev said that the church could have been targeted only by mistake and was “not among military targets.” The attacks took place while Armenian forces still controlled the city. Azerbaijani forces regained control of the city on November 8, having lost it in hostilities in 1992.

“The two strikes on the church, the second one while journalists and other civilians had gathered at the site, appear to be deliberate,” said Hugh Williamson, Europe and Central Asia director at Human Rights Watch. “These attacks should be impartially investigated and those responsible held to account.”

On September 27, Azerbaijan began air and ground attacks across Nagorno-Karabakh, an escalation in the conflict between Azerbaijan and Armenia and the local authorities in Nagorno-Karabakh. Fighting continued until November 10, when Armenia, Azerbaijan, and Russia concluded an agreement to end the hostilities.

Shushi is approximately 10 kilometers from Nagorno-Karabakh’s largest city, Stepanakert. Several attacks on Shushi were reported in the first days of fighting. By early October, many of its residents had fled, though some civilians remained, including men, women, and children.

The Cathedral, constructed in the 19th century and an important building for the Armenian church, was attacked twice in the afternoon on October 8. No one was injured or killed in the first strike as the civilians in the church at the time were sheltering in its basement, but three journalists for Russian outlets were injured in the second strike. Reports of the first attack were posted on social media channels beginning around 12:30 p.m.

Human Rights Watch spoke to four civilians who were at the church or in its immediate vicinity during one or both attacks, including two injured in the second attack.

Human Rights Watch visited the church on October 13 and spoke to two witnesses. Nune Shahramanyan, 46, who lives across the street, said that she and her children and some neighbors had been sheltering in the church basement since September 27.

“I had just gone to buy bread for my family … [who] were in the [church] basement,” she said. “And when I heard that sound [of the explosion] I saw … the debris and [heard] sirens starting. And I saw [three] planes. Then I ran back….I saw that my children were safe and I was relieved…. There was so much debris and stones falling.”

She said that seven or eight people were in the church basement at the time of the attack, all civilians. She said she did not see anyone else outside the church at that time.

Vova Zakaryan, 71, said he had just entered the basement just before it was struck: “I just hugged the… children and told them that they don’t need to panic.” Zakaryan said that people had been coming to pray and light candles in the church since September 27, but that only he, the children, and some neighbors were in the basement during the first attack. Zakaryan said no one had been guarding the church since the beginning of the hostilities.

Shortly after the first attack, journalists began arriving at the church grounds. Numerous photos and videos of the damaged exterior and interior were posted online. 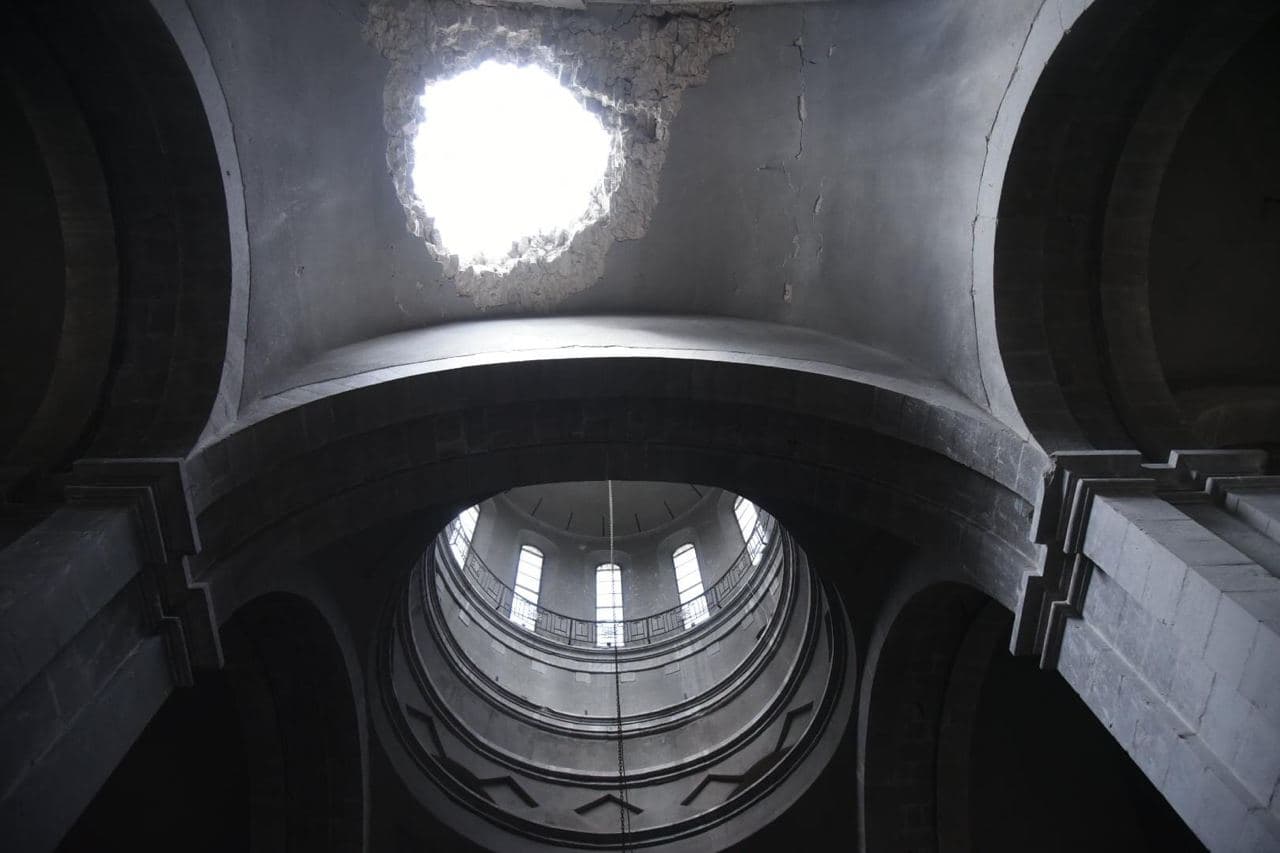 Damage to the ceiling of Ghazanchetsots Cathedral south of the main dome following the first strike in the afternoon of October 8. © 2020 NKR InfoCenter

The damage included a hole approximately one-meter wide in the church ceiling, just south of the main dome. Debris from the blast could also be observed on the church grounds. In photos circulated at that time on social media, remnants from a weapon can be seen, consistent with a munition capable of being accurately directed at a specific target, including components that support the movement of other pieces, such as fins or wings, consistent with a device that has a terminal guidance system.

Yuri Kotenok, a journalist who arrived in the afternoon, said he didn’t see any military equipment or personnel.

Around 5 p.m., the church was attacked again. Kotenok, Levon, Arzanov, and Vahram – who asked that his real name not be used –, all journalists, were inside during the strike.

Vahram said that no one else was in the church at the time and that they were headed toward the exit when the strike hit:

“At that moment there was a blast, a powerful one, we all were scattered… [T]here was total darkness… then the dust started to settle. I was near Yuri. We tried to take him from underneath the rubble; I could not. I got out to the street…[M]y hand was torn, and I had injuries on my back and on my head.” 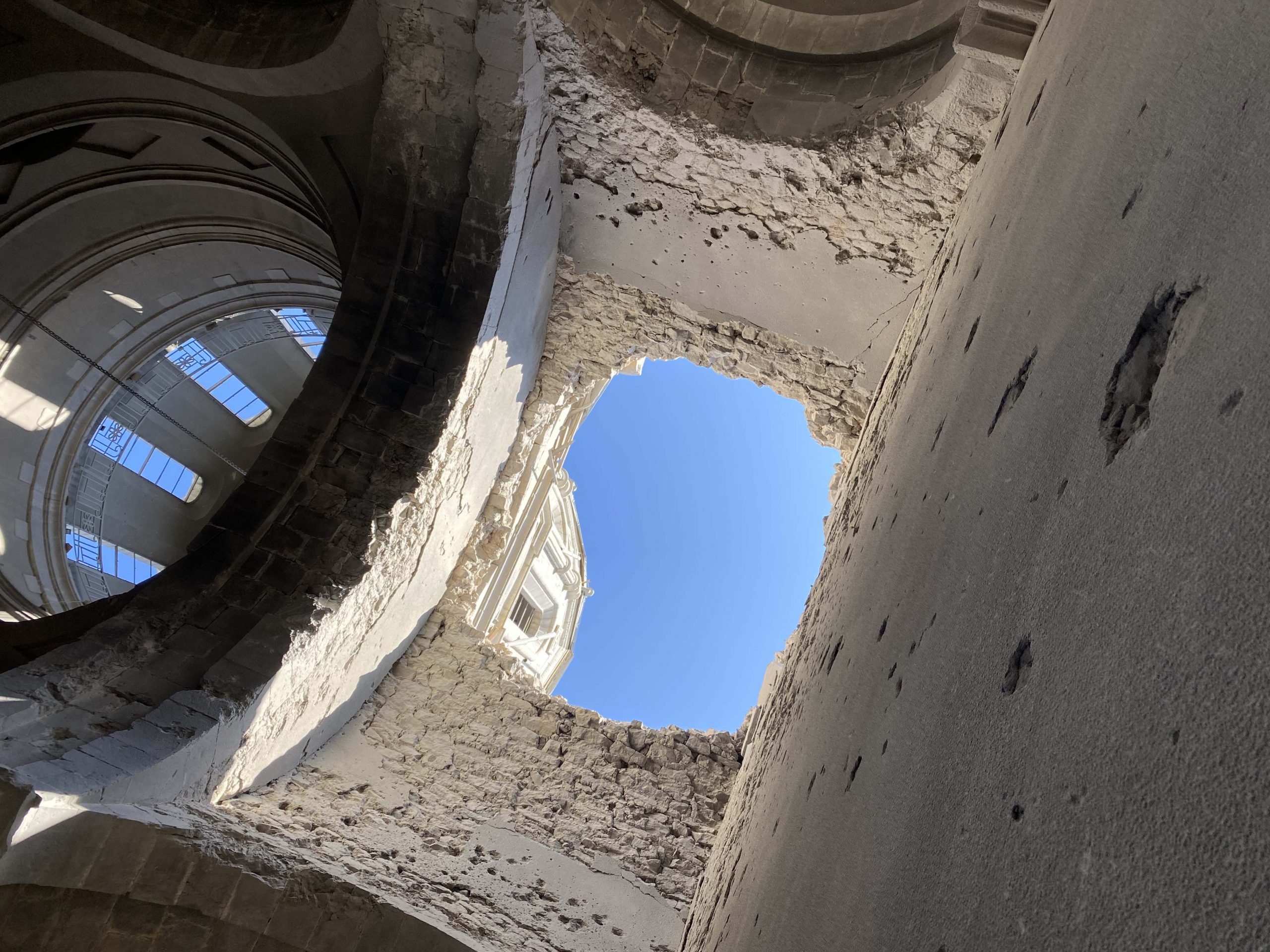 Damage to the southern portion of Ghazanchetsots Cathedral roof following both strikes on October 8. The fragmentation pattern on the walls of the church below the roof, which appear only after the second attack, suggests the weapon used likely was equipped with a time-delayed fuze. © 2020 Human Rights Watch

Kotenok also described the moment of the attack: “I heard an awful crack and then it was hell and my friend was knocked down and flew. There was shouting and blood and he was trying to ask if I’m alive and I was trying to articulate that I was, but I was under stones and wood.”

Kotenok said he was carried out of the church and transported to the hospital in Stepanakert for surgery, then airlifted to Yerevan.

In addition to injuries from fragments to his head, neck, abdomen, arms, and left foot, Kotenok said he had lung damage and a concussion. Seven days after the attack, he said he had bad headaches and hearing difficulties. 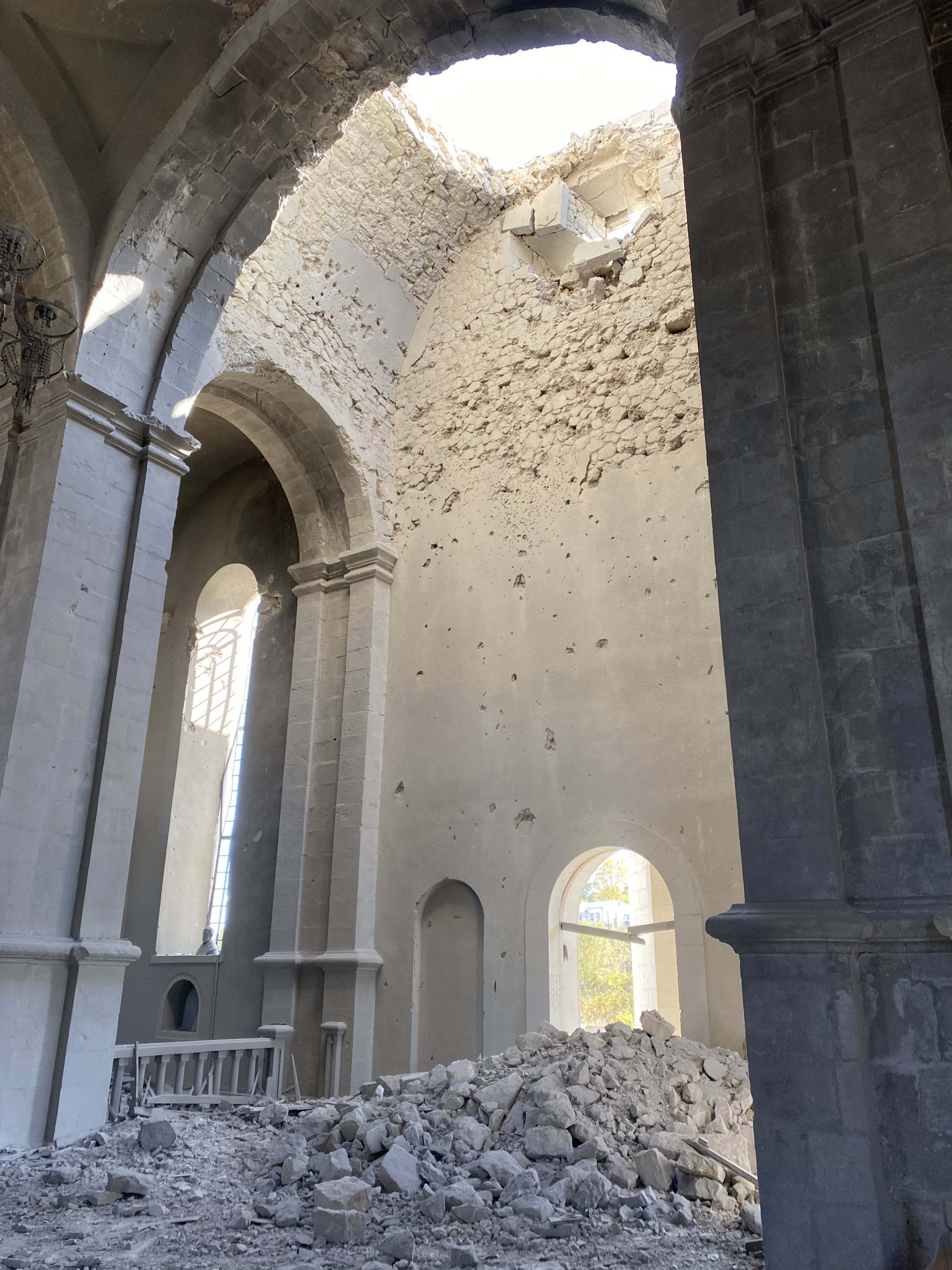 Damage to the southern portion of Ghazanchetsots Cathedral roof and debris on the church floor following two attacks on October 8. The fragmentation pattern on the walls of the church below the roof, which only appear after the second strike, suggests the weapon used likely was equipped with a delayed fuze. © 2020 Human Rights Watch

In addition to Vahram and Kotenok, Levon was also injured and treated in a hospital in Shushi.

A Human Rights Watch researcher examined the damage to the church and collected remnants from munitions. Human Rights Watch was not able to identify the munitions used in each attack but found remnants consistent with munitions capable of being accurately directed at a specific target and making corrections to its flightpath after release. Some of the remnants Human Rights Watch found and documented matched those circulated on social media following the first attack. However, photos of other remnants do not appear to have been posted elsewhere. No remnants found match any publicly documented air-to-ground weapons. 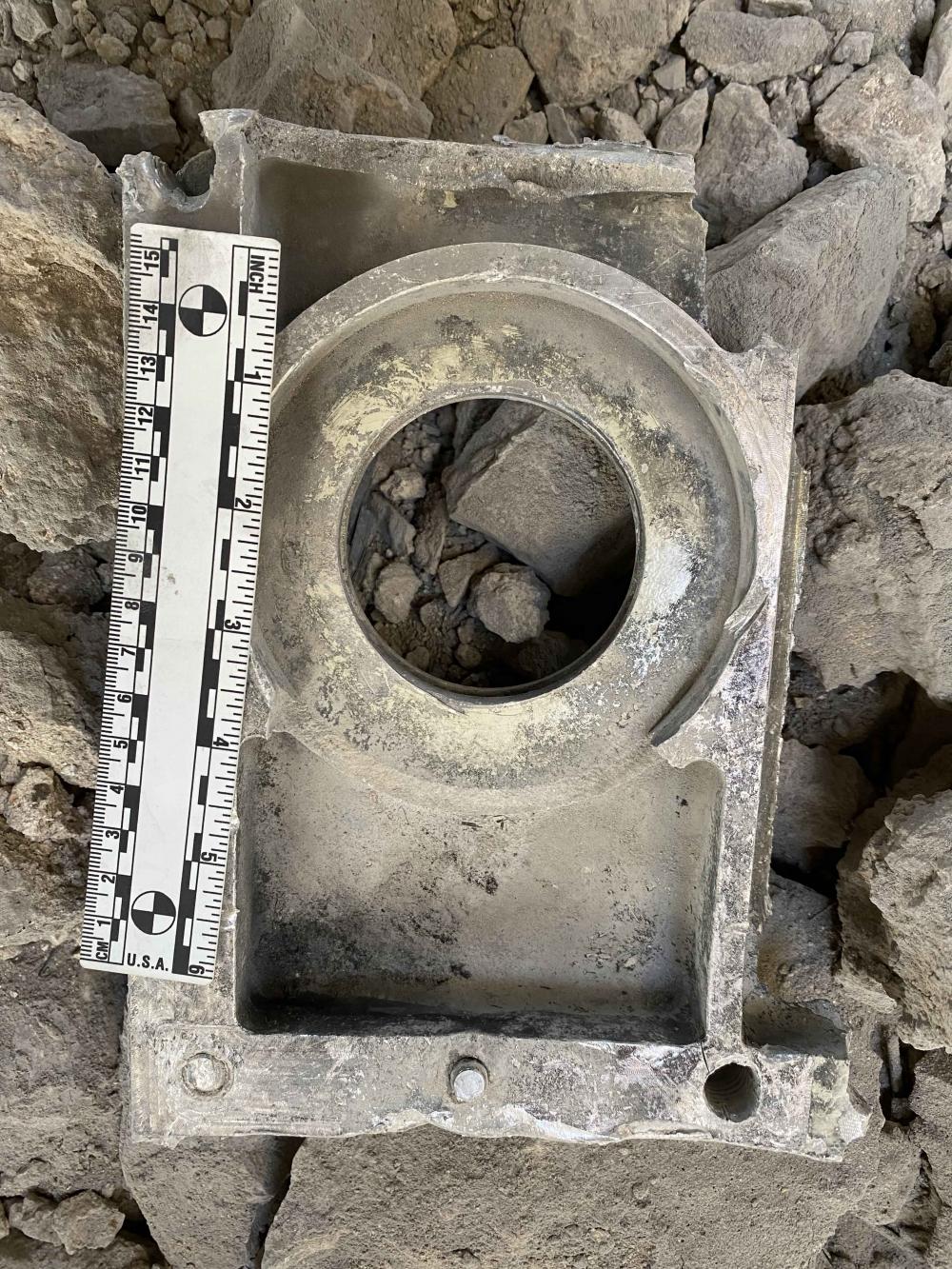 A heavy metal remnant found at the Ghazanchetsots Cathedral on the October 13, following of two strikes on the church in the afternoon of the October 8 @2020 Human Rights Watch

The Azerbaijani government has denied intentionally striking the church, instead asserting without evidence that the church was attacked by Armenian forces as a “provocation” or that it may have been mistakenly struck by Azerbaijani artillery.

However, multiple factors indicate that both attacks were directed at the church. The remnants found indicate that the weapons used were capable of being directed at a specific target. The two strikes struck the same part of the church roof, with no more than two meters difference between the point of impact. This substantially reduces the possibility that less precise weapons were used, given their inability to achieve such a high degree of accuracy over two strikes. Additionally, Human Rights Watch is not aware of any additional reports of strikes in Shushi around the church at the time of these attacks, suggesting that each attack was a single strike.

International humanitarian law, also known as the laws of war, requires warring parties to distinguish between civilian objects and military objectives at all times. Attacks directed at civilian objects that are not used to commit hostile acts or are otherwise not military objectives are prohibited and may constitute a war crime. Warring parties are also required to respect cultural property and special care must be taken to avoid damage to buildings dedicated to religion and historic monuments. They must not be attacked unless imperatively required by military necessity.

Serious violations of the laws of war committed with criminal intent – deliberately or recklessly – are war crimes. Governments have a duty to investigate allegations of war crimes by members of their armed forces or forces on their territory and to fairly prosecute those found responsible.

On October 15, President Aliyev said that Azerbaijan would need to investigate the attack. On November 9, BBC published an interview with Aliyev, who said in response to a question about the result of the investigation: “In order to investigate it, we have to be there to investigate.”

“It has been over a month since Azerbaijan has retaken control of Shushi and the government needs to waste no time in investigating the attacks and holding those responsible to account,” Williamson said. “Attacks such as these serve no military purpose and all parties should ensure these kinds of attacks are punished and otherwise prevented.”