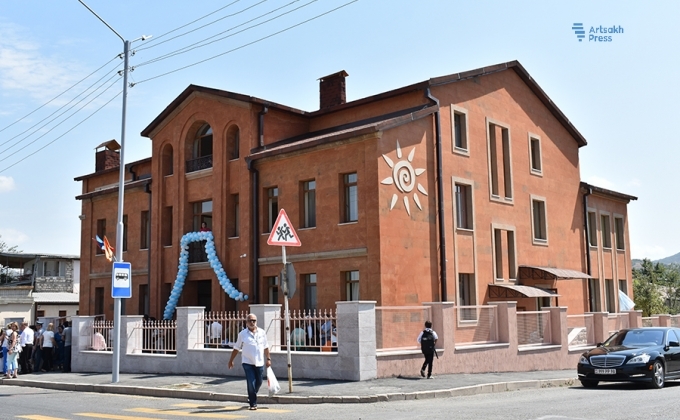 Asbarez, STEPANAKERT, Artsakh—Following an approximately three-month interruption caused by the Artsakh War, on December 14 classes resumed at the Armenian Relief Society’s Stepanakert, Khndzristan and Aknabert “Soseh” Kindergartens while Ashan’s Kindergarten will open its doors when electrical power is restored, making heating and lighting possible. All in all, 77 students returned to their beloved schools, rejoining with their schoolmates and teachers. Stage by stage, based on the number of families’ return to Artsakh, the number of attending students is expected to rise.

After the disastrous calamities of this war, it was hard for the teachers to resume their work given the still debilitating pain of loss. However, considering the children’s emotional serenity to be overriding all else, they are ready, at least partially, to minimize the terror and pain experienced by this budding generation.

Over these days of Yuletide, we wish all our little heroes a peaceful and happy furtherance of the school year.
This year, through its “Amanor” program, the ARS, alongside the “Soseh” Kindergarten pupils, will distribute Christmas presents to the expatriated children of Artsakh.

Taking care of the Kindergarten staff expatriated by the war, the ARS extended financial assistance to them. Today, the ARS closely follows the status of Artsakh, and in cooperation with ARS/Artsakh and ARS/Armenia it continues helping the displaced populations and children and families of soldiers killed in action.

Founded in 1910, the Armenian Relief Society, is an independent, nonsectarian, philanthropic society serving the humanitarian, social, and education needs of Armenian and Non-Armenians alike. The ARS operates in 27 different countries providing aid to local and international communities.