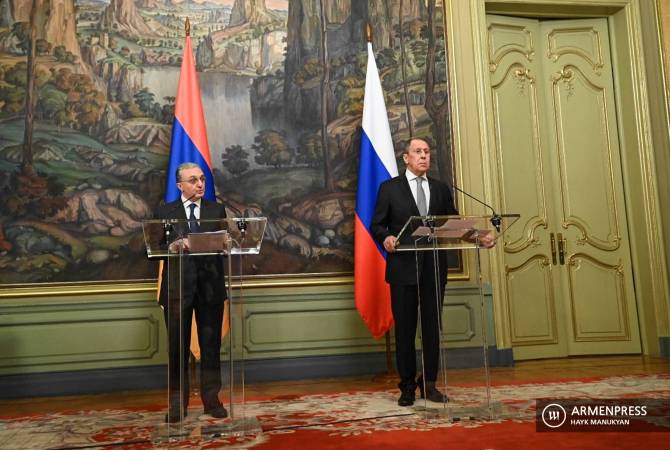 Armenpress- Armenian Foreign Minister Zohrab Mnatsakanyan emphasizes the need to stop the military operations unleashed by Azerbaijan against Artsakh, which, he said, are being carried out by Turkey’s direct interference and through armed terrorists brought from Syria and Libya to Azerbaijan.

During a press conference in Moscow, following the meeting with Russian Foreign Minister Sergei Lavrov, the Armenian FM said Azerbaijan has become a hotbed of international terrorism in the region.

“The situation has already become a serious security threat to the whole region. What our compatriots in Nagorno Karabakh have faced today is the embodiment of an existential threat. Since September 27 the military-political leadership of Azerbaijan is conducting large-scale aggression against the people of Nagorno Karabakh, with this showing its goal – to solve the Nagorno Karabakh conflict with military means and eliminate the people of Artsakh. This aggression is different in the sense that Turkey has directly interfered, there are also armed terrorists in Azerbaijan from Syria and Libya which Turkey uses for the interests of its military-political leadership. Azerbaijan has become a hotbed of international terrorism in the region. Today we need to stop the military operations, and Russia’s role on the matter is quite important”, the Armenian FM said.

The Minister stated that Azerbaijan doesn’t implement the agreement reached during the talks of the Armenian, Russian and Azerbaijani FMs on October 9, regarding the cessation of hostilities.

“Azerbaijan is not fulfilling its commitments on cessation of hostilities. With such genocidal steps Azerbaijan doesn’t put a difference between the military and the civilians. Moreover, it is more inclined to the targeting of the civilian population. During its military aggression, Azerbaijan has targeted over 120 civilian settlements in Artsakh, including the capital Stepanakert, the city of Shushi, Hadrut, Martakert, Martuni towns. The absence of military facilities in the targeted civilian settlements once again talks about Azerbaijan’s targeted actions which is equal to military crime”, he stated.

Zohrab Mnatsakanyan added that the air, artillery, and UAV attacks on Artsakh by the Azerbaijani armed forces are carried out by the direct support of the Turkish air force.

“There are numerous civilian casualties as a result of the air, artillery strikes carried out by the support of the Turkish aviation, there are many victims and wounded from Azerbaijan’s use of cluster bombs. As of October 10, 23 civilians were killed, hundreds were injured, 81 of them were heavily injured, by the Azerbaijani armed forces and the forces supporting them. The number of displaced people has increased due to the Azerbaijani aggression: some of these people moved to other settlements in Artsakh, and some moved to Armenia. The civilian infrastructures have also been heavily damaged. On October 8 the Azerbaijani armed forces carried out two strikes on the Ghazanchetsots Church in Shushi”, the FM said.

Los Angeles: 100,000 March in Support of Armenia in Conflict With Azerbaijan and Turkey