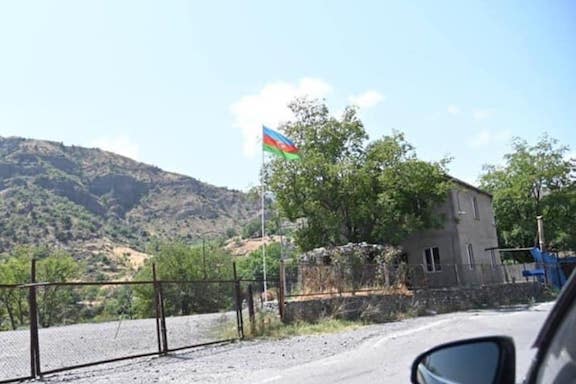 “It is evident that the Azerbaijani authorities are well aware that the blockade of the Goris-Kapan road or the so-called Azerbaijani border and customs checkpoints will cause violations of the rights of the civilian population and severe humanitarian issues, including the isolation of a number of civilian communities, which they are taking these deliberate steps to expand them,” Tatoyan said.

Communication and travel between towns and cities in the Syunik Province has become significantly more difficult, Tatoyan explained after a fact-finding mission from the Human Rights Defender’s Office outlined its findings.

Armenian government officials on Friday said that the alternate route for travel, the construction of which was completed recently, were safe for travel. The Human Rights Defender’s Office, however, reported significant difficulties and access for residents of Goris, Vorotan, Shurnukh and Bardzravan.

In an interview with Armenia’s Public Television, Armenia’s National Security Chief Armen Grigoryan gave assurances that Armenia villages would not be isolated as a result of the checkpoints, keeping silent about the fact that not only a number of villages in fact have been isolated, but their residents are forced to co-exist with Azerbaijani armed forces, who are within arm’s reach.

Tatoyan revealed that the Tatev-Kapan road in the Syunik Province has been significantly obstructed, disrupting the free and safe movement of impeding the people’s ability to earn a living by, for example, selling agricultural products. He said there have been restrictions on the fast and efficient access to food, basic necessities, and medical care and other services in these areas.

“Masked and armed Azerbaijani servicemen continue to monitor the Goris-Kapan road, which in itself is a violation of the right to life and a real threat to security,” Tatoyan warned.

The fact finding mission of the Human Rights Defender’s Office observed that local government structures and officials are attempting their utmost to circumvent the obstacles created by the checkpoints, specifically impacting children, the elderly and those with special needs.

Tatoyan’s posted a short video (see below) detailing some of the challenges facing the civilian population that rely on the now-blockaded roads for their every-day life.

“Finding a solution to these issue is further complicated by the difficulty to pass through the alternative road (that goes through the Khot village in Tegh), which in certain areas can become impassable due to weather conditions, which may become further restricted as winter approaches,” said Tatoyan.

Parents, teachers and students were caught off guard Friday morning as they found out about the closure of the roads that lead to their schools.

Tatoyan’s office said that four out of nine teachers in the Bardzravan school are from Goris, while another travels from Kapan to the school, forcing the teachers to switch to online learning as the educators could not reach the school. Of the 44 students enrolled in the Vorotan school, three have special needs, with another three special needs students enrolled in the Vorotan elementary school. Of the 19 teachers in the schools, 14 live in Goris, who cannot travel to their jobs. A similar situation exists in the school in Shurnukh.

Tatoyan said that the road closures, coupled with the impassability of the alternate road, the free movement of the residents has become restricted. This, he said, could create acute humanitarian crisis in the area.

The Human Rights Defender said that the isolation of civilians stems from Baku ongoing policy of Armenophobia.