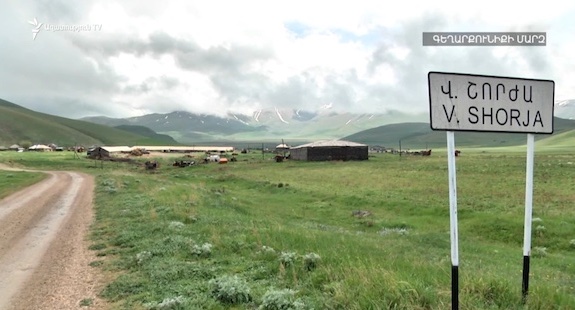 Azerbaijanis who breached Armenia’s border and have advanced into positions in the Gegharkunik and Syunik provinces are actively building roads and digging trenches on Armenia’s sovereign territory.

“This is our land,” Artryom Yeranosyan, the mayor of the Veris Shorja village in the Vardenis region of Armenia’s Gegharkunik Province told RFE/RL’s Armenian Service. “But in that area they [Azeris] are working moving their trenches and paving the road so they can go from one trench to another in vehicles.”

“If they have been sitting on Armenian territory since the 12th [of May], they can do whatever they want,” Yeranosyan added, explaining that the Azerbaijani forces have also occupied the area’s pastures.

He added that the Azeris have occupied the pastures of the village. “If they come any closer, then we must leave Shorja. That is not possible either,” Yeranosyan told RFE/RL.

In the Norabak village, Azerbaijanis have been paving the road for three days, using tractors, said the village head Vazgen Asatryan, adding that the Azeri forces have come down from the hills into his village.

Asatryan said that the Azerbaijani have been descending down from the hills for three days, getting closer to older barns left over from the Soviet era. With their trucks and bulldozers it’s as if a new border post has been added.

The mayor of the Kut village Sima Chitchyan said that she has been monitoring the area with binoculars and she can observe the Azerbaijani doing construction.

“Azerbaijani servicemen are illegally stopping villagers in pastures near villages in the Gegharkunik region, demanding explanations about the locals’ movement, or trying to carry out illegal searches of their vehicles and issuing threats,” said Tatoyan, whose office said that Azerbaijanis are threatening the population in Verin Shorzha by brandishing weapons.

“We have two types of situations here. The first is when the Azerbaijani soldiers are physically present in our specific pasture areas or where the water supply is. The second is when they target the areas under their direct observation,” explained Tatoyan.

The village leaders all agreed that their communities are threatened and the shepherds have been ousted from the pastures in the areas.
Yeranosyan said that the water supply of several villages in Vardenis are under Azerbaijani control.

“Our main water source is where they [the Azeris] are now sitting,” Yeranosyan told RFE/RL.