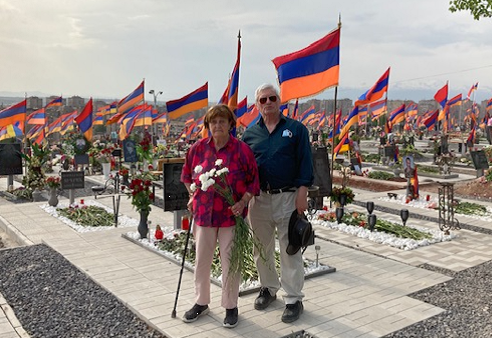 Caroline Cox and David Thomas paying respect to those killed in the 44-day war. The ‘sea of flags’ placed on each grave spread far beyond this photograph – and also in Artsakh and other towns and villages: a powerfully tragic representation of the loss of life incurred.

During this visit to Armenia in April, it was our painful privilege to meet refugees who fled from Artsakh to Yerevan, wounded soldiers, civilian survivors and the families of missing persons.

Everyone whom we met described the recent war in Karabakh and its aftermath as part of a long and ongoing process of genocide. Their concerns are shared by many others, including the human rights group Genocide Watch, who issued a Genocide Emergency Alert following the invasion, and the International Association of Genocide Scholars, who warned in October:

“…history, from the Armenian genocide to the last three decades of conflict, as well as

Armenians in Nagorno-Karabakh, and perhaps even Armenia, is a very real

xenophobia, aggression, and war, and for the prevention of new genocide.”

At least four urgent concerns remain despite the ceasefire in November:

torture, indefinite imprisonment or enslavement, with reports of humiliating treatment and

desecration of corpses by Azerbaijani soldiers, in actions captured on videos and widely

By February 2021, Armenia had asked the European Court of Human Rights to intervene in

240 cases regarding POWs and civilian detainees. In 90 per cent of those cases, there is photo and/or video evidence confirming that these people were in Azerbaijani custody; the rest of the cases rely on witness accounts.

We witnessed widespread and acute grief among those who have lost loved ones, or whose relatives are known to be held captive in Azerbaijan.

‘We will continue to expel these (Armenian) liars. They have neither conscience nor morality. They don’t even have the brain’.

‘We must not and will not forget about our historic lands. This must determine our future activity, and we are already working in that direction. Our historic lands are the Yerevan Khanate, Zangezur, Geycha (Lake Sevan). Both the young generation and the world should know about this.’

‘Yerevan (the historic capital city of Armenia) is our historic land we, the Azerbaijanis,  will go back to these historical lands. It is our political and strategic goal, and we gradually reach it.’

He also refers to Armenia as a “country of no value” and to Armenians as “savages”,

In April 2021, President Aliyev opened a Spoils of War Park in Baku to commemorate the recent war. The park also displays mocking, humiliating mannequins of Armenian soldiers – and children are encouraged to hit them or abuse them in other ways. 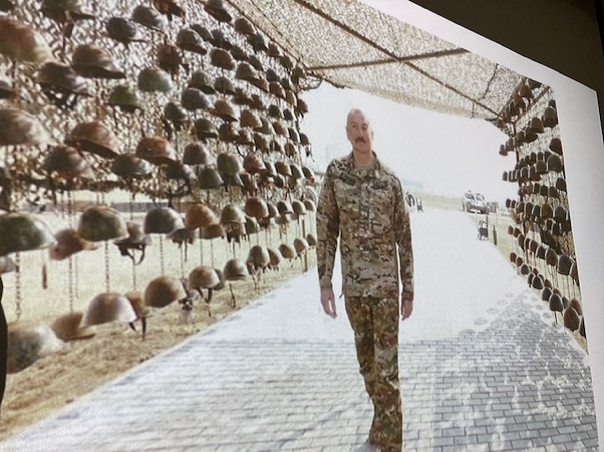 President Aliyev walks through a corridor of killed Armenian soldiers’ helmets at the Spoils of War Park. 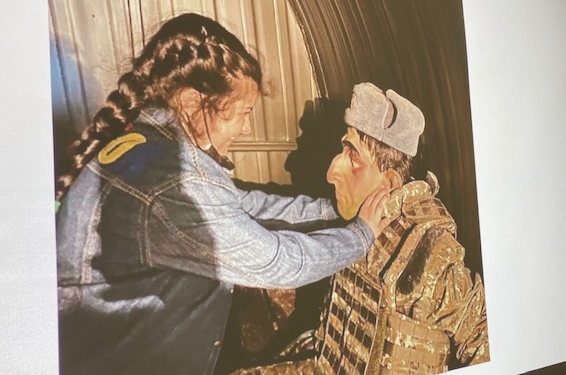 Children too are exposed to and taught Armenophobia, including mocking caricatures of Armenian soldiers. Source: photos shown in a presentation by the Armenian Human Rights Ombudsman about the Spoils of War Park in Baku.

President Aliyev recently praised his troops for completing “their glorious mission” in Nagorno Karabakh to liberate “our native lands from occupiers”:

“…We took timely steps, mobilised all our resources, created an iron fist and crushed

the enemy’s head… If Armenian fascism ever raises its head again, the result will be

the same. Again, Azerbaijan’s iron fist will break their back.”

His avowed commitment to ‘liberate lands’ and ‘crush the enemy’s head’ are doubly alarming and should not be allowed to continue with impunity.

During our visit, we heard reports of breaches to the November ceasefire agreement, with

Karabakh – in at least one incident, they were held back by Russian peacekeepers.

We also heard reports of armed units creeping into locations within sovereign territories of the Republic of Armenia, and rumours of plans to create a corridor through Armenia to connect Turkey and Azerbaijan. While these are rumours, they are causing great concern for the Armenian people, especially in view of the act that Azerbaijan has been granted impunity for the numerous war crimes and crimes against humanity which are well recorded.

Spartan Altunyan, a patient from the Lady Cox Rehabilitation Centre in Karabakh, told us: “When the recent war started, I didn’t want to leave my village. It was my home. But my brothers insisted that I should leave because the enemy was very close. My village is now occupied by Azerbaijan.” 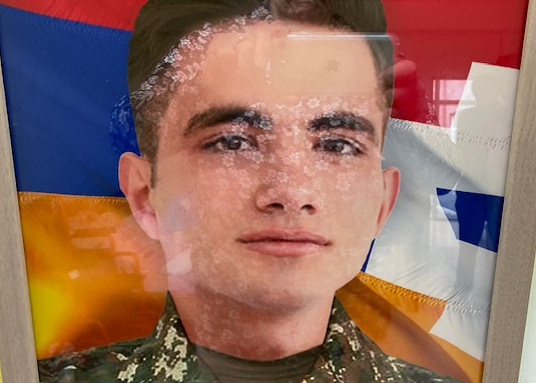 One of Spartan’s brothers (pictured) was killed in the war, aged 19.

cultural heritage sites, which are now under Azerbaijan’s control. The sites include 161

In a BBC report ‘the mystery of the missing church’, Azerbaijani troops are seen celebrating the capture of the town of Jabrayil from the bell tower of the local church. Correspondent Jonah Fisher visited the site after the 44-day war and the church was no longer there. Photos taken in 2017 and 2021 (Source: BBC)

On 20 November, UNESCO proposed to undertake an independent mission to draw a preliminary inventory of significant cultural properties, as a first step towards safeguarding the region’s heritage. We understand that UNESCO is still waiting for a response from Azerbaijan in order to proceed with its mission.

of cultural and religious sites that were targeted or damaged during or since the recent war,

Between 1915-23, an estimated 1.5 million Armenians were killed in the declining Ottoman Empire and surrounding areas.

Many countries do recognise the Genocide but many do not (including the United Kingdom,  – although Wales does and exhibits a memorial in Peace Park in Cardiff).

It was a source of great comfort to the Armenian people when, on April 24th 2021, President Biden made an announcement that the USA does now fully recognise the Armenian Genocide. 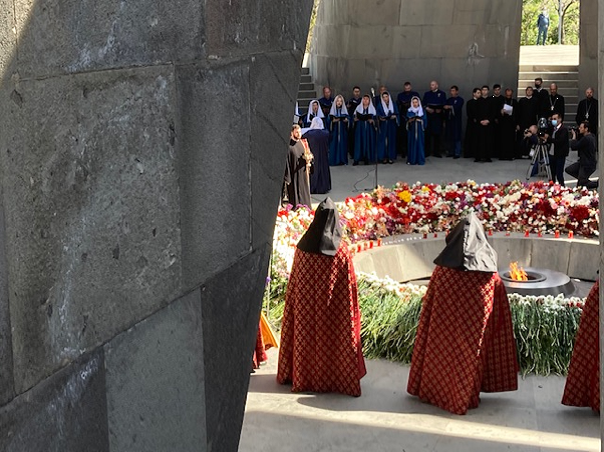 All of those whom we met expressed dismay and anger at the lack of meaningful support from the UK Government and the wider international community.

including humiliating treatment and desecration of corpses, are war crimes. Detainees

should be released and repatriated without further delay. Perpetrators must be

independent mission to investigate all Armenian cultural and religious sites to

religious communities to continue to run them and live in them.

Turkey, has carried out such systematic, wide-ranging and brutal violations of

human rights. To date, neither state has been held to account for its actions by the

international community, despite clear evidence of recent and ongoing atrocities.

measures to ensure that Azerbaijan and Turkey begin fully to uphold the ceasefire.

the mass murder of Armenians carried out in the Ottoman Empire from 1915-23;

actions of its predecessors.

It has been well said that the failure to acknowledge and condemn a genocide encourages the perpetration of further genocides. It is deeply disturbing to see that Azerbaijan may be pursuing such perpetration with impunity. 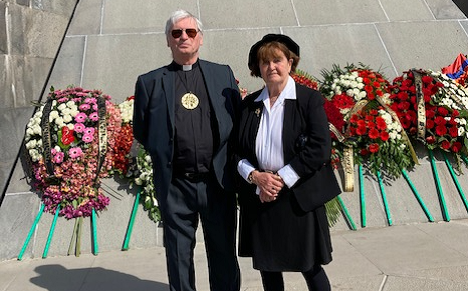 ‘We will never forget’: David and Caroline at the Armenian Genocide Memorial.