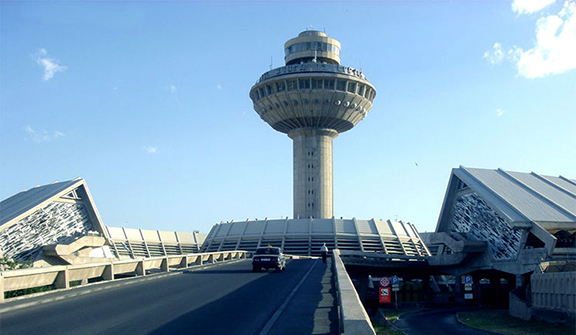 “PanArmenian”.- British architects are leading international calls for the now-abandoned Zvartnots airportin Armenia to be saved from the wrecking ball, the Daily Mail says in an article.

It looks like a monolithic space-city straight out of science fiction, but in reality it was one of the jewels in the Soviet crown.

Terminal 1 at Zvartnots airport in Armenia once welcomed Kremlin VIPs and visitors from across the USSR. Now it sits abandoned, under lock and key, and facing demolition.

Now stepping inside Zvartnots, once the crossroads of Europe and Asia, is like being transported back four decades.

The grand entrance hall and the soaring concrete and marble walls are now crumbling. The cracked ceiling is leaking, and the runway viewing windows are broken or missing.

Leading British architect Tim Flynn says the airport is an outstanding piece of architecture. His London-based international practice has had an office in Yerevan for 14 years.

And he hopes that the new, more democratic government in Armenia which came to power after May’s Velvet Revolution will decide Zvartnots is a historical building worth preserving.

And yet he warns the longer it’s left to crumble away, the chances of saving it diminish.

‘I realise the new prime minister has a lot on his plate, but I hope his conscience will lead to a change of plan. Whatever you think of the old Soviet Union, the buildings from this period were extraordinary and adventurous, a piece of history.’