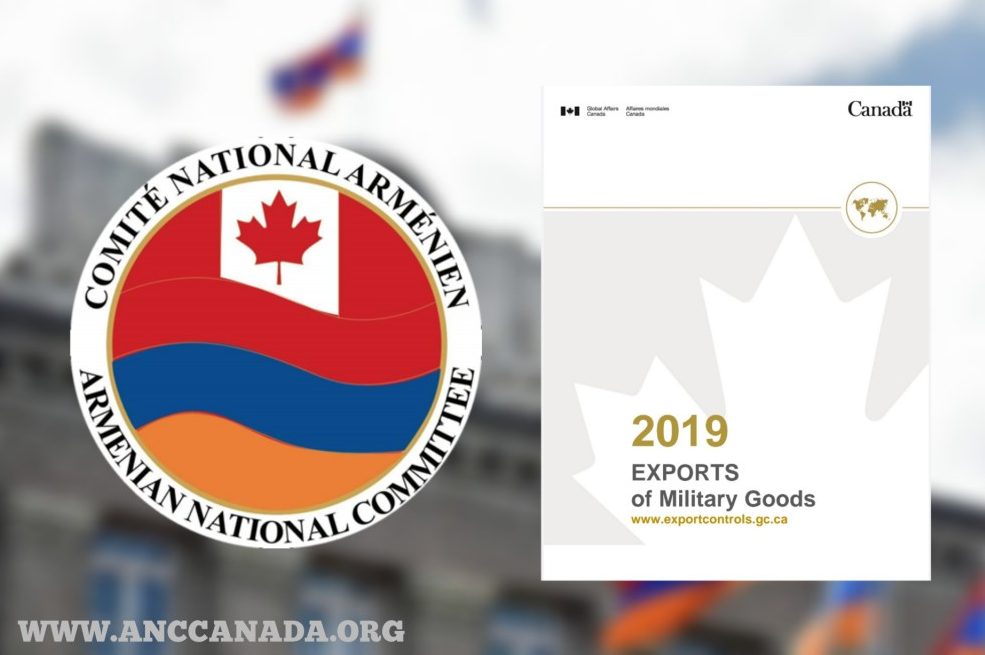 (OTTAWA) – On May 29th, 2020, Global Affairs Canada (GAC) published its annual report on Canada’s Military Exports, where it had mentioned that no military export permits were issued to Azerbaijan during 2019, reported the Armenian National Committee of Canada (ANCC).

Since the sale of armoured vehicles from private Canadian companies to the Republic of Azerbaijan in 2017, this is the second year in a row that Canada has not included Azerbaijan in the list of countries with whom it trades military goods. Following Turkey’s “Operation Peace Spring” in Syria in October 2019, Canada also banned military exports to Ankara, which was renewed indefinitely in April 2020.

Following the publication of the report, on June 4th, 2020, the ANCC sent a letter to Canada’s Foreign Affairs Minister, the Hon. Francois-Philippe Champagne, commending the government’s decision and urging the minister to continue refraining from engaging in arms trade with both Turkey and Azerbaijan.

In the letter, ANCC Co-Presidents, Hrag Tarakdjian and Shahen Mirakian said “Turkey and Azerbaijan pose a significant military threat within their immediate region and beyond. While Turkey continues to destabilize the Middle East and threaten the very existence of local minorities, Azerbaijan has significantly increased its military preparedness, constantly signalling a renewal of hostilities in the Republic of Artsakh, while threatening to attack the Republic of Armenia directly.”

ANCC’s co-presidents also shared their hope that based on Canada’s arm’s export regulations and Ottawa’s accession to the Arms Trade Treaty, military export permits bound for Turkey and Azerbaijan will become subject to a more rigorous assessment process.

“Canada simply cannot become complicit in the unspeakable war crimes and human rights abuses sanctioned and carried out by regressive dictatorships such as Turkey and Azerbaijan.”, mentioned the letter.

“We will continue to monitor the trade of military goods between Canada, Turkey and Azerbaijan and ensure that our government always does the right thing.” Concluded Tarakdjian and Mirakian.