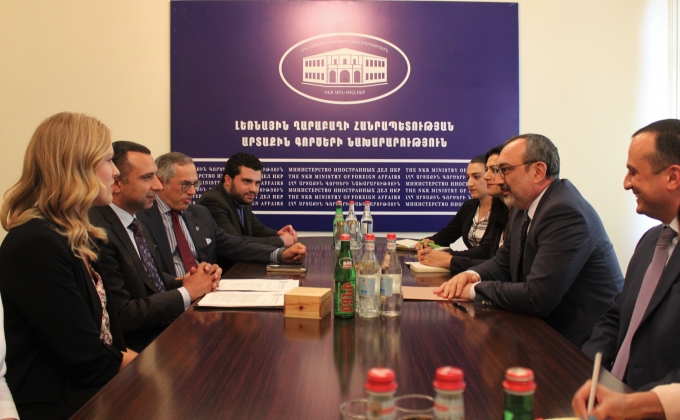 STEPANAKERT—Artsakh Foreign Minister Karen Mirzoyan on Wednesday met with a parliamentary delegation of Canada, headed by Majed el-Shafie, the president of the “One Free World” organization, who had arrived in Artsakh with a fact-finding mission.

The members of the delegation noted that they had arrived in Artsakh to conduct a study on the violations of the international humanitarian law and military crimes committed by Azerbaijan during the large-scale aggression launched against Nagorno Karabakh in April 2016.

Mirzoyan welcomed the initiative of the delegation and emphasized the importance of raising public awareness in international circles about the reasons and consequences of the Azerbaijani aggression and to properly condemn those responsible for advancing the criminal activity of the Azerbaijani authorities.

During the meeting, Artsakh Foreign Minister presented the facts of the crimes committed by Azerbaijani armed forces during the April aggression and the period that followed. Mirzoyan also briefed the visitors on the history of the Karabakh conflict, the current stage of its resolution process as well as the position of Artsakh on reaching a lasting solution to the conflict.

The Permanent Representative of Artsakh to the United States, Robert Avetisyan, and the member of Armenia’s National Assembly, member of the Standing Committee of Education, Culture, Youth and Sport Affairs, Karine Achemyan, were also present at the meeting.