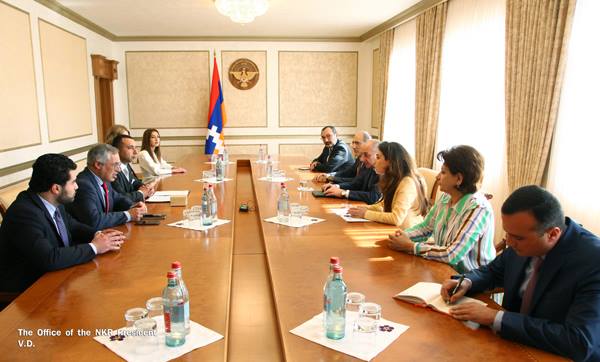 IMG. A scene from the meeting with Artsakh President Bako Sahakyan (Photo: Office of the President of Artsakh)

STEPANAKERT, Artsakh, (A.W.) —A Canadian delegation headed by Rev. Majed el-Shafie, founder and president of One Free World International, and Members of Parliament the Hon. Tony Clement and Ms. Rachael Harder—shadow ministers of Public Services and Procurement and the Status of Women, respectively—concluded their four-day fact-finding mission to the Republic of Armenia and the Republic of Artsakh on Sept. 1. Accompanying the delegation was the Republic of Artsakh’s permanent representative in North America, Mr. Robert Avetisyan, and the executive director of the Armenian National Committee of Canada (ANCC), Sevag Belian.

“While there have been multiple visits by Canadian delegates to Artsakh in the past, this particular visit was special in its kind, considering that it was tasked by a specific fact-finding mission that aimed to study and reveal the gross human rights violations that were committed by Azerbaijan during the Four-Day War in April 2016,” said Belian.

During their visit, the delegation held meetings with high-ranking officials from Armenia and Artsakh and discussed bilateral relations and current developments in the ongoing peace process.

“This visit and the delegation’s special investigation into the war crimes committed by the Azerbaijani armed forces during the April aggression reveals important information for the international community to consider and learn the reality behind this conflict,” said Belian.

“Our expectation from the Canadian government is to continue its balanced approach towards the peaceful settlement of the conflict through the framework of the OSCE [Organization for Security and Cooperation in Europe] Minsk Group, advocate for the establishment of monitoring mechanisms along the line of contact, and encourage the participation of the Republic of Artsakh in the negotiation process, which is the only fair method to reach a viable settlement of the conflict,” added Belian.

Shortly after their arrival in Artsakh, Rev. El-Shafie and the parliamentarians were subjected to slanderous attacks by the Azerbaijani Foreign Ministry, and eventually placed on Baku’s infamous “blacklist.” Meanwhile, Azerbaijani state media falsely accused the ANCC with defamatory accusations of sponsoring the trip of the delegation.

In an interview given to the Canadian newspaper Globe and Mail, the Hon. Tony Clement refuted the Azerbaijani fabrications, saying, “What I saw with my own eyes is very disturbing in terms of the atrocities that were committed by Azerbaijani forces. In terms of the political situation, I am sure I echo Global Affairs Canada when I say it is better to have a negotiated solution than a continuing war.”

“The ANCC worked with One Free World International and the governments of Armenia and Artsakh to plan the itinerary for this unprecedented fact-finding mission, without any further involvement. This mission was Rev El-Shafie’s initiative and we were pleased to provide our input, make appropriate introductions, and participate,” said  Shahen Mirakian, president of the ANCC.

The delegation concluded its four-day trip on Sept. 1 with a press conference held at the National Assembly of the Republic of Artsakh, where they presented the preliminary results and impressions of their mission to local and international media outlets, specifically reiterating their intent to continue advocating for the peaceful resolution of the Artsakh conflict and the fundamental rights of the people of Artsakh.