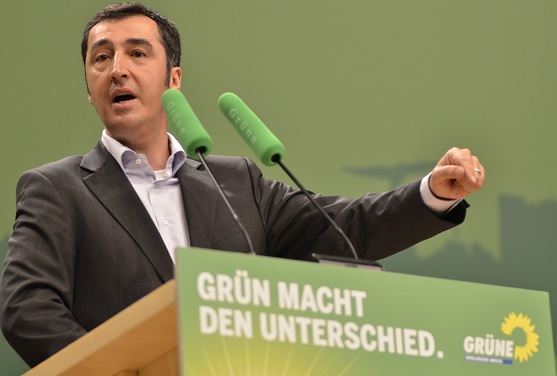 TORONTO, Canada (A.W.)—The co-leader of Germany’s Green Party Cem Özdemir—a German Member of Parliament of Turkish origin and one of the initiators of the Armenian Genocide resolution that was approved by Germany’s Parliament (Bundestag) on June 2, 2016—will be the keynote speaker at events in Toronto and Montreal, commemorating the 10th anniversary of Turkish-Armenian editor, journalist and columnist Hrant Dink’s assassination.

Several community organizations in Toronto have come together for the past 10 years to remember the former editor-in-chief of the bilingual Turkish-Armenian newspaper Agos and to honor his legacy.

Speaking to the Armenian Weekly, chair of the organizing committee Raffi Bedrosyan said that the commemorations are not merely a remembrance, but rather a way for the community to continue Dink’s pursuit for justice. “Remembering Hrant Dink on the anniversary of his assassination is not simply commemorating a slain Armenian journalist. By remembering, we continue his journey toward reconciliation and justice regarding the Armenian Genocide. We also help realize his vision of dialogue between Armenian and Turkish people—a dialogue that is based on truth and a common body of knowledge,” Bedrosyan said.

Many influential figures have attended commemorations in Toronto honoring Dink over the years, including Turkish-German scholar Taner Akçam; lawyer, writer, and human rights activist Fethiye Çetin; and prominent Turkish journalist and writer Hasan Cemal. “These people share Hrant’s vision and break all taboos in Turkey. They stand against the denial of the truth about the Armenian Genocide,” Bedrosyan explained.

Dink was assassinated outside of his Istanbul office on Jan. 19, 2007. He had written and spoken about the Armenian Genocide extensively, and was well known for his efforts for reconciliation between Turks and Armenians, as well as advocating for human and minority rights in Turkey. At the time of his murder, Dink was under prosecution for violating Article 301 of the Turkish Penal Code and “denigrating Turkishness.” His assassination sparked huge national protests and outrage both in Turkey and internationally.

This year’s keynote Cem Özdemir was a leading force behind the German Parliament’s June 2016 resolution recognizing the Armenian Genocide and acknowledging German responsibility in not preventing the genocide committed by Ottoman Turkey—Germany’s WWI ally. Born in Bad Urach, West Germany, Özdemir is ethnically Turkish—his family emigrated from Turkey to Germany as “guest workers.”

Özdemir delivered a passionate speech in the Bundestag prior to the Armenian Genocide vote, during which he directly addressed the Armenian guests attending the Bundestag’s session: “Just because we were complicit in this horrible crime in the past does not mean that we are going to side with the deniers today.” During that speech, Özdemir also quoted his good friend Hrant Dink: “If Armenians lived in Van today, that city would be the Paris of the Orient.”

“Despite all the risks and consequences, Özdemir and his parliamentarian colleagues defended and passed the resolution. He was Hrant’s good friend,” Bedrosyan explained.

Before introducing Ozdemir to audiences, Bedrosyan will present Wolfgang Gust’s book Armenian Genocide: Evidence from German Archives.  “He and his German parliamentarian colleagues were greatly influenced by the German historian’s book, which was financed by the Zoryan Institute of Toronto,” Bedrosyan said.

The Zoryan Institute partnered with Gust to collect, translate, and restore thousands of historical documents from the German Foreign Office Archives that reveal details about Ottoman policy during the Armenian Genocide. Zoryan also assisted in the translation, editing, and publishing of the book in English, Turkish, and German. A representative of the Zoryan Institute will contextualize the historical meaning of Hrant Dink’s murder during the commemoration event in Toronto.

In his keynote addresses, Özdemir will explain Hrant’s role in his decision to get involved in the Armenian Genocide resolution, and his journey as one of the most prominent human rights advocates in Europe.

“These commemorations and—more critically—the German Armenian Genocide recognition resolution, demonstrate that the genocide issue is not a historical issue of the past; not just something that happened a hundred years ago. It is, indeed, a current issue, deeply affecting relations between different peoples and different states, sometimes with serious consequences,” Bedrosyan said.

Armenian Prime Minister May Not Be Eligible for Upcoming Elections