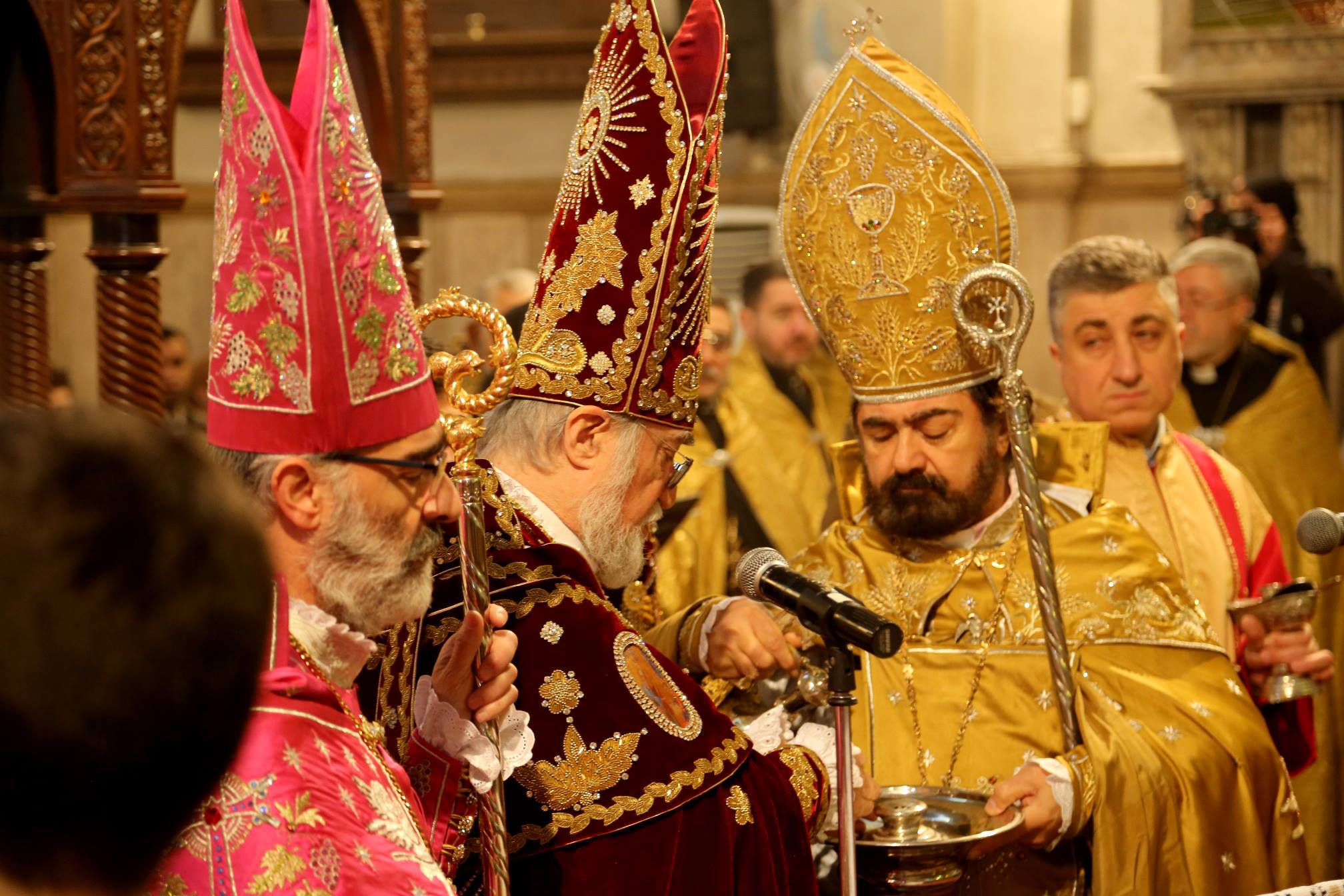 ALEPPO, Syria (Asbarez)—His Holiness Aram I, Catholicos of the Great House of Cilicia, celebrated Christmas Mass on Jan. 6, with hundreds of community members from this city besieged by war flocking to St. Mary’s Armenian Church in the heart of the city.

“Let the all the children of our nation, who are dispersed around the world, know that our people in Syria and Aleppo have suffered, but, today they stand tall and have woven a rainbow of peace over Aleppo,” said the Catholicos in his sermon.

“For centuries, we have lived in peace here [Aleppo] with Christians and Muslims alike, with the spirit of cooperation and mutual love and respect. Let the world know that Aleppo is a city of Christian-Muslim coexistence,” said the Catholicos who added that some have attempted to distort Aleppo’s essence and image. However, he added that “Aleppo continues, and must continue, to live with its Christian-Muslim coexistence with renewed will and determination.”

The pontiff also ensured parishioners that Armenians around the world stood in solidarity with the people of Aleppo.

“The Armenians of Syria have played a crucially unique role in our national reality. We are confident that with renewed vigor and determination they will continue their important role in the lives of our people,” said the Catholicos.

According to Aleppo-based Armenian news outlet Kantsasar, among the participants of the Mass were members of the Prelacy Executive and Religious councils; leaders of community organizations; members of the Syrian Parliament representing Aleppo; the chairman of the Syrian Parliament’s Foreign Affairs Committee; a delegation from France; local government officials; journalists; high-level political officials; and Armenia’s Deputy Consul General to Aleppo Armen Gevorkyan.

The Mass was celebrated by the Catholicos who was joined on the altar by the Prelate of Peria (Aleppo) Archbishop Shahan Sarkissian, Bishop Norayr Ashekian, and clergy from Aleppo. A choir comprised from all four Armenian Apostolic Churches performed the religious songs, under the conductorship of Sarkis Isgenian.

On Jan. 7, beginning at 10:30 a.m., the Catholicos and his entourage toured various institutions that were damaged and ravaged during the war. The first stop was the Forty Martyrs Armenian Church, which was bombed several times by Islamist rebels. The Catholicos toured the destruction after saying a prayer.

Aram I’s next stop was the historic 1,300-year old Omayad Mosque, where they were met by Muslim clerics. Inside the Mosque, Aleppo’s Religious Property head described how the Islamist rebels destroyed the church and looted its treasures, smuggling a portion of them to Turkey. The Catholicos at the the historic 1,300-year old Omayad Mosque. (Photo: Cilicia TV)

The Catholicos was joined by other Armenian clerics in saying a prayer in memory of all Syrians who lost their lives.

After visiting the mosque, the Catholicos and his entourage visited the historic Aleppo fortress. After witnessing the destruction around the fortress, the Catholicos told the press that the genocidal Turks tried to destroy Syria in the same manner that they pillaged our historic homeland 100 years ago. He said that the Christian and Muslim people of Syria will be victorious and through their unfettered will they will rebuild Syria, especially Aleppo.

“Aleppo is a symbol of love and peace and I am confident that it will be revived,” said the Catholicos. The Aleppo representative of the ruling Ba’ath party, in his remarks, said that the people of Syria will join hands to rebuild their country and will not allow Turkish barbarism to destroy their country.

The Catholicos and his entourage then traveled to the Armenian-populated suburb of Nor Kyugh, where he toured the damaged Sourp Kevork Church. After prayers, the Cathilicos said that inside the church is reminiscent of the destruction by the Turks of Armenian churches during the Genocide.

On the same day, the Catholicos visited the offices of the Armenian Relief Society (ARS) of Syria and Karen Yeppe School (Jemaran).

On Jan. 8, the Catholicos and his entourage visited the Holy Trinity Zvartnots Armenian Catholic Church, where he met with and celebrated Mass with Catholicos Exarchate Archbishop Bedros Miriatian.

Later in the day, the Catholicos also visited the Bethel Armenian Evangelical Church in Aleppo and laid a wreath at the Armenian Genocide memorial in the church yard.

The leader of the Bethel Church, Reverend Haroutune Selimian welcomed the Catholicos and emphasized the importance of the pontifical visit.