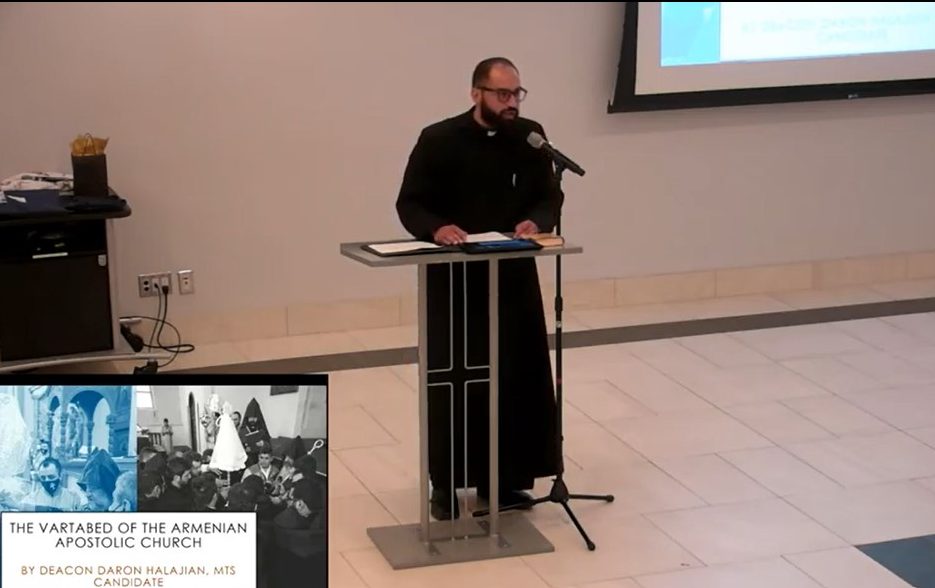 Ecumenism and ecumenical relations have always played an essential part in the Christian Church. The Armenian Apostolic Church, in this regard, has maintained an active role in this critical mission that aims to foster unity and love amongst various Christian communities.

This lecture series aims to educate one another about each Church’s tradition and heritage and is a commendable contribution to ecumenism and inter-denominational dialogue. Deacon Daron presented the third talk in this series entitled, “An Introduction to the Armenian Church Fathers and the Four Ranks of Special/Masnavor Vartabed.”

Before beginning his presentation, Deacon Daron expressed his gratitude to Father Pishoy Salama and Father Thomas for their invitation and warm reception. On behalf of our prelate, Archbishop Papken, Deacon Daron also congratulated Bishop Archilides on his recent ordination to the episcopate. The deacon briefly introduced the Armenian Apostolic Church and its four patriarchal sees. Particular focus was given to the Holy See of Cilicia and its Catholicos, His Holiness Aram I. Deacon Daron touched upon His Holiness’s extensive experience and contribution to ecumenism and the ecumenical movement and read a quote from His Holiness to the audience. The deacon also presented a few details about the Armenian Prelacy of Canada and its parishes, as the two parishes had not had in-person encounters since before the pandemic.

The first part of Deacon Daron’s presentation was entitled the Vartabed of the Armenian Apostolic Church and introduced the term vartabed and its meaning. He touched upon its Biblical usage and appearances and described the vartabed’s function within the Armenian Apostolic Church. He also presented the following Armenian Church fathers, providing brief biographical information and details on their significant works: Sahag Bartev, Mesrob Mashdotz, Movses Khorenatsi, Hovhannes Odznetsi, Khosrovik Tarkmanich, Stepanos Syunetsi, Nersess Shnorhali, Krikor Datevatsi, and Krikor Naregatsi. The deacon spoke about the creation of the Armenian Alphabet, the translation of the Bible into grabar/classical Armenian, and detailed the significance of the Oshagan Monastery and how current candidates of the vartabed rank from the Brotherhood of Etchmiadzin receive their bestowals at this very monastery after successfully defending their dissertations.

In the second part of his presentation, Deacon Daron Halajian presented the four ranks of Special/Masnavor Vartabed of the Armenian Church. He briefly overviewed the double snake-headed staff of the vartabed in the Armenian Church. He used the example of Exodus 3, describing the commissioning of Moses by God to free the Israelites from Egyptian captivity and tied it to the staff and the bestowal of the first rank. With each bestowal, he included reflection questions alongside the gospel reading of each rank on the slides, so those present could ponder and meditate upon some of the missional and educational responsibilities the invitee is entrusted to administer. He also concisely explained the liturgical process behind each bestowal.

At the end of his presentation, Deacon Daron expressed his appreciation for the invitation and stated that the community of St. Mary Armenian Apostolic Church impatiently awaits to receive the Coptic brothers and sisters at its parish, to strengthen the relationship between our two churches. The evening ended with Deacon Daron’s heartfelt prayers and was followed by a warm reception.

This report was provided by the St. Mary Armenian Apostolic Church of Toronto.