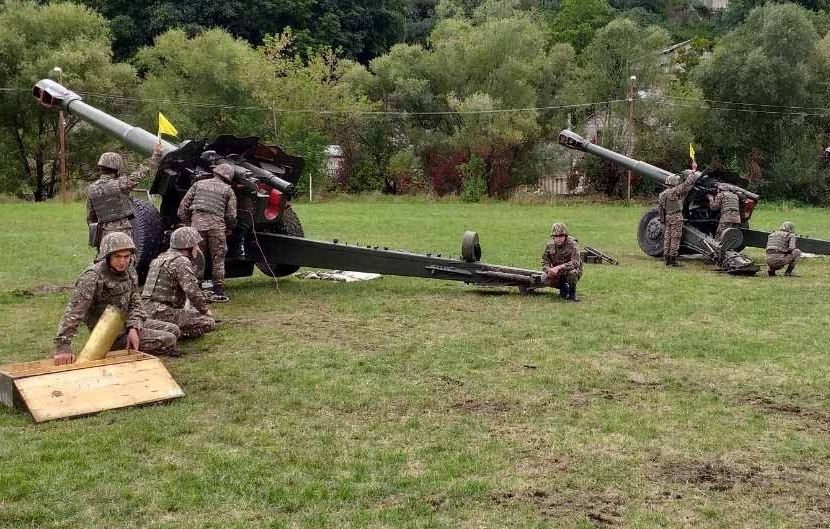 Soldiers of an artillery unit of the Armenian army train at a military base in Tavush province, September 18, 2019.

(Azatutyun)- Seven Azerbaijani servicemen, including an army general, and two Armenian officers were killed on Tuesday in fierce fighting that continued on the Armenian-Azerbaijani border for the third consecutive day.

According to Azerbaijani news agencies, Veliyev also confirmed the deaths of five other Azerbaijani soldiers, among them two army majors. He gave no other details of the incident.

At least four other Azerbaijani soldiers were killed shortly after skirmishes at that section of the Armenian-Azerbaijani frontier, the worst in years, broke out on Sunday.

The Armenian military reported, meanwhile, that it has suffered its first casualties since the start of the hostilities. Shushan Stepanian, the spokeswoman for Armenia’s Defense Ministry, said Major Garush Hambardzumian and Captain Sos Elbakian were killed by enemy fire.

Stepanian said earlier on Tuesday that an Azerbaijani military drone attacked civilian infrastructure in Berd, an Armenian town close to the border section. She said none of the town residents were hurt as a result.

The Armenian Foreign Ministry condemned the reported drone attack, saying that the Azerbaijani side will receive an “adequate response.”

According to the authorities in Yerevan, Azerbaijani forces shelled two Armenian border villages on Monday.

Baku likewise accused the Armenian side of shelling Azerbaijani villages located along the heavily militarized border. It said that a 75-year-old resident of one of those villages was killed on Tuesday.

The conflicting sides accuse each other of provoking the escalation with attempts to seize enemy positions in the mountainous area.

The truce violations there continued despite calls for an immediate end to the skirmishes voiced by Russia, the European Union and the United States. The U.S., Russian and French mediators trying to a broker a resolution of the Nagorno-Karabakh conflict urged Armenia and Azerbaijan on Monday resume peace talks “as soon as possible.”