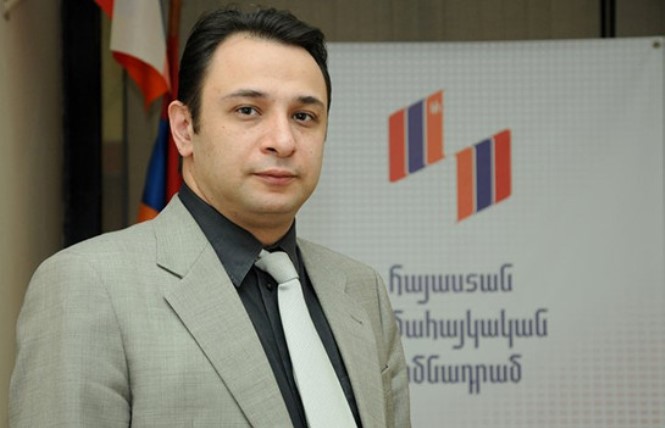 (Azatutyun)- The National Security Service (NSS) has arrested the executive director of a pan-Armenian charity headquartered in Yerevan, accusing him of embezzlement.

The NSS said on Tuesday that Ara Vartanian, who has managed the Hayastan All-Armenian Fund for the last ten years, admitted using its funds mostly donated by the Armenian Diaspora for online gambling and other “personal purposes” after being taken into custody on Monday.

“In the past week alone, Vartanian transferred about 14 million drams ($29,000) from a bank card of the fund to online casinos,” read an NSS statement. “That amount totaled about 130 million drams in the period from 2016 to 2018.”

According to the statement, Vartanian told investigators that he used fresh funds raised by Hayastan as well as his own money to compensate the charity for the “waste.”

The security agency added that it is now auditing Hayastan’s financial documents to detect possible other instances of embezzlement and “verify the legality” of its expenditures. It did not say whether Vartanian will be formally charged.

Hayastan has implemented over $350 million worth of projects in Armenia and Nagorno-Karabakh since being set up in 1992. The fund’s current Board of Trustees is headed by President Armen Sarkissian and comprises Prime Minister Nikol Pashinian, other senior Armenian state officials, Catholicos Garegin II as well as prominent members of Armenian communities around the world.

In recent years the fund has partly financed, among other things, the construction of a second highway connecting Nagorno-Karabakh to Armenia. The 116-kilometer-long road was inaugurated last year.

Most financial contributions to Hayastan have been made in annual telethons broadcast from Los Angeles. The charity raised over $12.5 million at the most recent telethon aired in November. Most of that money is due to be spent on two agricultural-development projects in Karabakh.