‘Fragile’ Talks End With Agreement on Ceasefire on Oct. 10 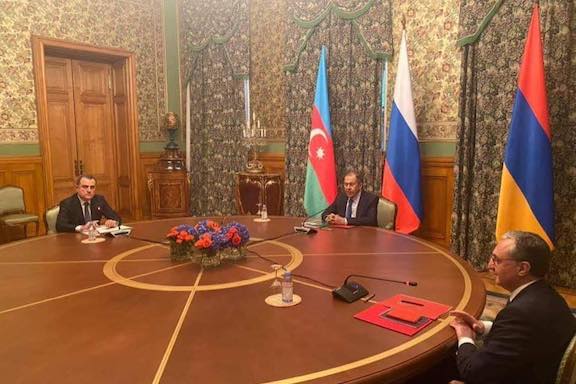 (Asbarez)- Russian foreign minister Sergei Lavrov announced that talks with foreign ministers of Armenia and Azerbaijan, Zohrab Mnatsakanyan and Jeyhun Bayramov on Friday in Moscow yielded an agreement to begin a humanitarian ceasefire on Saturday to exchange soldiers’ remain and captives.

In his brief announcement after more than 11 hours of talks, Lavrov said that the sides had also agreed to discuss the parameters of the cease fire at a later date. He said “substantive talks” on the basic principles of Karabakh settlement were initiated and the format of future talks would remain unchanged.

“Foreign Minister of Armenia departed for Moscow, where the consultations of foreign ministers of Armenia, Azerbaijan and Russia will be held. Agenda will focus exclusively on cessations of hostilities, humanitarian issues of exchanging bodies and prisoners of war,” said Armenia’s foreign ministry spokesperson Anna Naghdalyan.

As the talks kicked off in Moscow, Azerbaijan’s President Ilham Aliyev, in a fiery televised address to his nation, blasted Armenia and the international mediators, saying the only way to resolve the conflict was through military force or if Armenia hands over territories.

“Let those holding talks in Moscow know that it’s our territory and we won’t be making any concessions,” Aliyev said.

“Mediators and leaders of some international organizations have stated that there is no military solution to the conflict,” Aliyev said. “I have disagreed with this thesis, and I have been [proven] right. The conflict is now being settled by military means and political means will come next.”

Later on Friday Aliyev said that principles to settle the Nagorno-Karabakh conflict, which were put forward by the United States, Russia and France, should form the basis for a settlement, reported the the Russian Russia’s RIA Novosti news agency.

France, Russia, and the United States—the OSCE Minsk Group co-chairing countries—launched a peace drive at a meeting in Geneva on Thursday. Details of the initiative have not been made public.

“We are moving towards a truce soon even if the situation is still fragile,” French President Emmanuel Macron’s office said.

As part of the group’s mediation efforts, Macron again spoke with Armenian Prime Minister Nikol Pashinian and Aliyev by phone on Thursday night and Friday morning respectively. A spokesman for Macron told the AFP news agency later that the sides could reach a ceasefire agreement by Saturday.

When Azerbaijan began its aggressive attack on Artsakh on September 27, Macron took a leading role in advocating for a ceasefire and blaming Turkey for its unequivocal and military support of Azerbaijan.

Macron revealed that Turkey-backed jihadists were deployed to fight alongside Azerbaijani forces—a fact corroborated by Russia’s intelligence chief and a spokesperson from the Pentagon.

Official Ankara continued its destabilizing role in the conflict by saying the talks are sure to fail, unless the settlement is beneficial to Azerbaijan.

“It is almost certain to fail if it doesn’t also involve a detailed plan to end the occupation,” Turkish presidential spokesman Ibrahim Kalin told Al Jazeera.

Artsakh authorities on Friday said 376 soldiers and 22 civilians had died since the fighting started on Sept. 27.