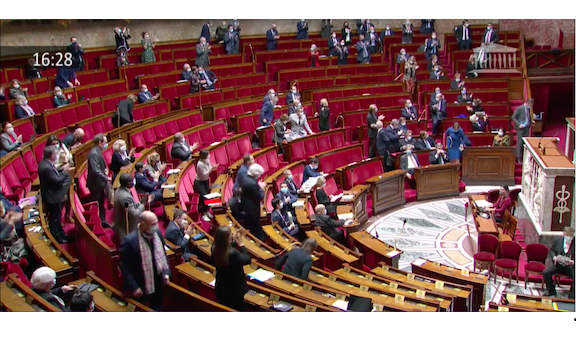 (Asbarez)- France’s National Assembly on Thursday in an almost unanimous vote passed a resolution recognizing Artsakh and condemning Azerbaijan and Turkey for their aggression against Armenia and Artsakh.

This follows last week’s vote by the French Senate, which similarly recognized Artsakh and condemned Turkey and Azerbaijan.

The Armenian National Committee of France welcomed the passage of the resolution, saying that it was time for the French government to take a firm stance and recognize Artsakh’s independence.

“Following the vote in the Senate, the National Assembly passed a resolution recognizing Nagorno-Karabakh by a vote of 188 to 3. The consensus is broad—including the majority— which opposed the pressure from the [France’s] Minister of Foreign Affairs,” said Jules Boyadjian, the chairman of the ANC France.

“The message is loud and clear,” said Boyadjian. “The government must change its policy. It must recognize the Nagorno-Karabakh Republic and invite its allies to follow in the footsteps of this resolutions. The government must, as of today, open a direct channel of communication with the Artsakh authorities, establish diplomatic relations, and ensure the French presence in Stepanakert, the capital of Artsakh (Nagorno-Karabakh),” added Boyadjian.

“We welcome the French National Assembly’s overwhelming call today for the recognition of Artsakh and encourage the United States – as a fellow OSCE Minsk Group Co-Chair country – to join in recognizing Artsakh’s status as a free and independent republic,” said Armenian National Committee of America Executive Director Aram Hamparian.

“Azerbaijan – guilty of weeks of non-stop war crimes against the citizens of Artsakh – lacks any legal, political, or moral standing to oppose international recognition of Artsakh’s independence, an essential remedial action required to ensure the safety and survival of its at-risk, indigenous population,” added Hamparian.

The National Assembly resolution cited Turkey’s aggressive and continued build-up of military and Ankara-backed mercenaries not only in Karabakh and around the world, warning of a surge in islamist violence that is being managed directly by Ankara.

It also cited Azerbaijan’s massive military buildup and its targeting of civilians during the Karabakh war as war crimes and a threat to stability not only in the Caucasus but also around the world.

1. Affirms the urgent need to reach a final settlement of the conflict guaranteeing the lasting security of the affected civilian populations and the implementation of a process of peace and recognition of Nagorno-Karabakh.

2. Calls on the government to consider with its European partners the rapid delivery of humanitarian aid;

3. Invites the government to reconsider with its European partners, taking into account the proven role of Turkey in this conflict, the continuation of the process of accession of Turkey to the European Union.

4. Invites the government to reaffirm, with the active support of its European partners, the fundamental values ​​of the European Union based on the defense of human rights and fundamental freedoms.

5. Stresses the need to actively defend threatened minority Christian communities in Europe, the East and the world.