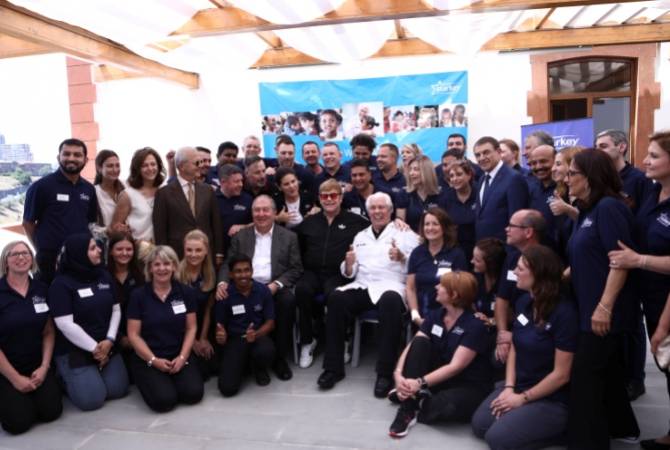 (Armenpress)- Renowned English singer Sir Elton John, who arrived in Yerevan on Saturday, says that Armenian President Armen Sarkissian and Prime Minister Nikol Pashinyan have initiated great changes in the country, and that he is happy to be a part of the “tsunami” of planned changes.

Speaking to reporters in the Yerevan head office of Yerevan My Love Benevolent Foundation, a charity project founded by the president 8 years ago, Sir Elton John emphasized that everything cannot be changed at once, and reforms should be done step by step.

Sir Elton John, who arrived to Armenia as part of a charity mission of Starkey Hearing Foundation, visited the Hayk and Elza Titizian Children’s Rehabilitation Center in Yerevan with the Armenian president and Starkey founder and CEO William Austin.

100 hearing aids were donated to children on Sunday as part of the initiative.

Speaking to reporters in the Yerevan My Love Foundation office, the Armenian president said that Sir Elton John is Armenia’s friend for one simple reason, because he has many Armenian friends, one of them being himself.

“He is not only a world-renowned singer but also a great intellectual who reads a lot and knows Armenia’s history very well. I remember how years ago when Catholicos Garegin I passed away, Elton wrote me a letter and we met and discussed the history of Armenian Christianity,” the president said.

“The person wears this tool for the first time and begins to hear: anyone can be moved by seeing this. A new life is being opened before the children,” the president said regarding the hearing aid initiative.

The president also said that Elton John can help in raising awareness for Armenia globally, because Sir Elton John’s team has also arrived and they are filming the charity initiative and the film will be screened during the singer’s upcoming tour. Asked by a reporter whether or not Elton John’s attitude for Armenia has changed after the recent change of government, Sarkissian said that Armenia exists for thousands of years, and the attitude for the country is deep.

“You haven’t changed before or after the revolution, you are simply more free today, more vigourous. I said during my swearing-in ceremony that I dream of a young Armenia, it turned out I don’t need to dream – you are the young Armenia, and this is obvious. Elton too said in his speech that the vigor which exists in the city is visible, although he has been here only for few hours”, President Sarkissian said.

Sir Elton John arrived in Armenia on the sidelines of a charity project implemented by Yerevan My Love Benevolent Foundation.  The foundation is implementing different charitable initiatives, one of which jointly with Save The Children.

The charity helps disabled children with therapy and rehabilitation activities.

Later, the renowned singer took part in the launch of the 2nd phase of Starkey’s mission in Armenia. The event was attended by President Armen Sarkissian, Speaker of Parliament Ara Babloyan and Starkey founder and CEO William Austin.

The initiative took place in the Hayk and Elza Titizyan Children’s Rehabilitation Center.

The rehabilitation center is one of the projects of Yerevan My Love. Speaker Ara Babloyan, who is a doctor by profession, is a co-founder of the initiative.

“Last year nearly 2000 people received hearing aids. We continued working after that. I am here because I am one of the co-founders of the project,” Babloyan said.

Asked what is the tie between himself, Elton John and Starkey, Babloyan said that 25 years ago, Arabkir children’s charitable foundation – his brainchild – had one purpose, to help the segment of the Armenian population whom the government is still unable to provide with necessary aid.

“One of the projects is prevention of disabilities especially among children, but also adults. The Arabkir medical complex has 11,800 children will chronic problems, various development diseases, 800 of whom are children with hearing problems”, he said.

“Today, together with Starkey Foundation, we provide both children and adults with hearing devices,” he added.

The Arabkir Children’s Charitable Foundation and Starkey Hearing Foundation carried out today’s mission in the Save The Children center in Yerevan, and will continue the mission on May 28 and May 29 in the town of Tsakhkadzor, and more than 1500 people from Yerevan and other cities will be provided with a variety of services – such as hearing diagnosis, donation of hearing aids, consulting etc.