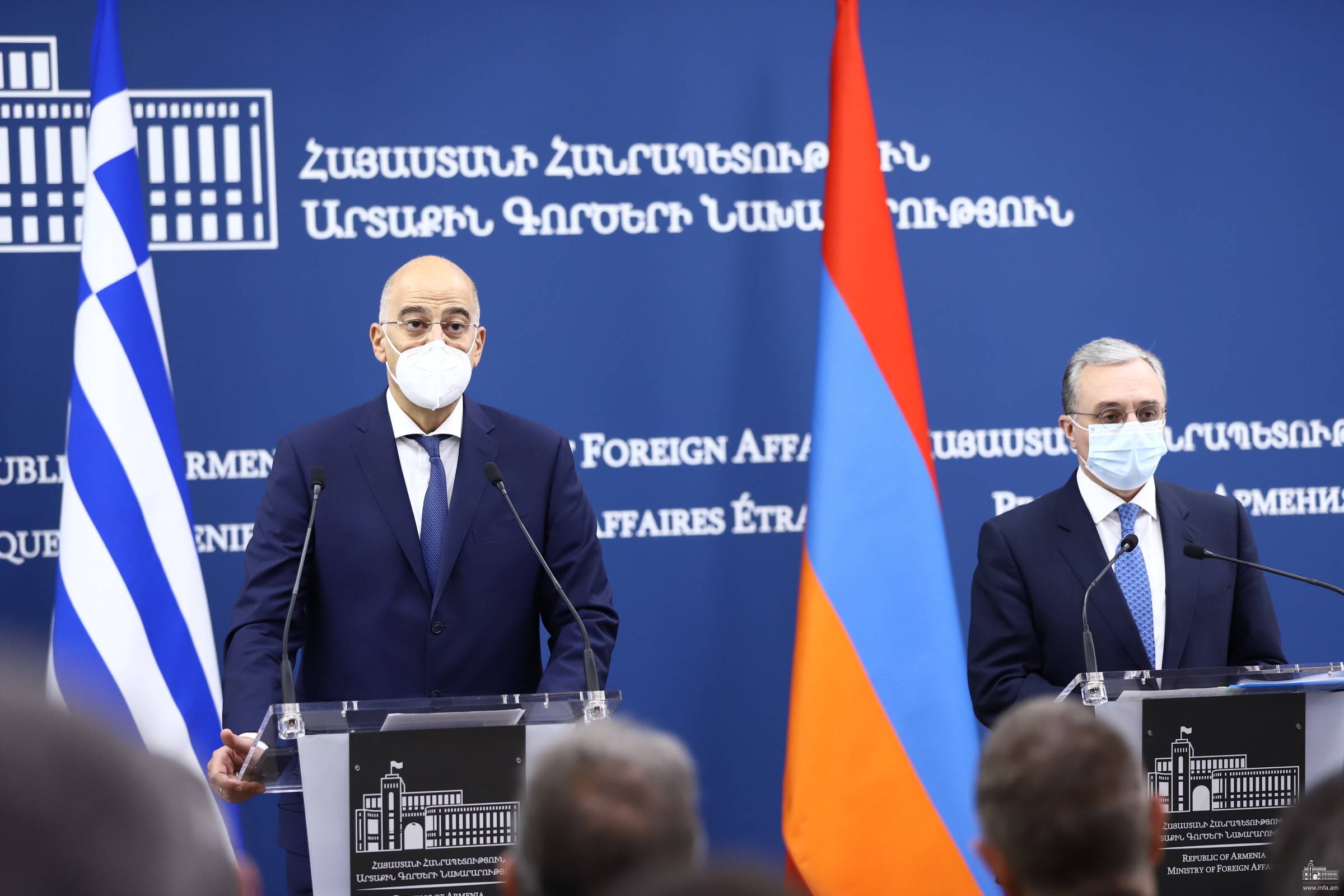 Greece’s Foreign Minister Nikos Denidas at a joint press conference in Yerevan with his Armenian counterpart Zohrab Mnatsakanyan on Oct. 16

‘Turkey Must be Condemned for its Action,’ Says Foreign Minister Nikos Denidas

It’s important for the international community to clearly differentiate between those who add fuel to the fire and those who adopt a constructive approach and remain committed to a peaceful solution of disputes, Greece’s Foreign Minister Nikos Dendias said at a joint press conference with his Armenian counterpart Zohrab Mnatsakanyan on Friday in Yerevan

Further commenting on the escalating military aggression in Artsakh Denidas said Athens is closely following the ongoing developments, welcomes the talks held in Moscow on cessation of hostilities.
“We are very concerned by the violations of that agreements. The ceasefire should be strictly respected. We believe that lasting solutions are possible only through diplomatic means, by returning to the negotiation table under the auspices of the Minsk Group Co-Chairs. We are facing very serious security challenges in our direct neighborhood, but we are trying to find diplomatic solutions for the sake of peace, stability and welfare in the region,” explained the Greek foreign minister.

Greece is currently in its own regional dispute with Turkey, which is encroaching on the waters of the Eastern Mediterranean, drawing in Cyprus and Egypt into a regional conflict. During the press conference, Denidas voice Athens’ concern over Turkey’s unequivocal and military support to Azerbaijan as it continues to viciously attack Artsakh.

“Ankara’s inference in one more conflict is very concerning. It has brought serious concerns in the international arena,” Denidas told reporters in Yerevan. “We were the first urging the EU to react, calling for a lasting ceasefire and a peaceful solution under the auspices of the Minsk Group. We also proposed that the EU urge an end to the involvement of external forces.”

“All have a well-known common denominator—Turkey. It is ignoring of EU calls on respecting the international legitimacy,” said Denidas, adding Turkey must be condemned based on its actions, not the statements.

During the joint press conference at the foreign ministry, Mnatsakanyan emphasized that the recognition of Artsakh’s right to self-determination is key foreign policy priority for Armenia.

“This issue has been and remains more than clear to Armenia: we are talking about existential security,” explained Mnatsakanyan. “The recognition of the exercise of our compatriots’ right to self-determination is a priority issue. Today the fact of the matter is that it is a measure of protection.”

Mnatsakanyan said that official Yerevan will continue working with the international community and its partners.

“We are committed to the [humanitarian ceasefire] agreement reached in Moscow on October 10, and we will continue insisting that this issue will not be resolved through force. This fact is proven by the actions of our compatriots—the courageous men who are showing determination in Artsakh to protect their land, their homeland, their lives and their families,” Mnatsakanyan said adding the Azerbaijan “will face a deeper crisis.”

“We greatly appreciate that the general perception and assessment among our partners and the international community is that it’s impossible to hide the reality, that this is an aggression committed against our compatriots—the people of Artsakh—with civilians as its target,” said Mnatsakanyan reiterating that Armenia has been and remains guarantor of Artsakh’s security and protection.

“One of the main issues is that two new factors—Turkey and international terrorists—have created a most dangerous equation in Baku, which is not listening to the approach of the international community on this matter. This, of course, is dangerous and at the same time, surely, has its consequences,” explained Mnatsakanyan.

He added that Armenia will continue working within the framework of the OSCE Minsk Group Co-Chairmanship, as well as with all its partners in order to further strengthen the use of necessary political and diplomatic tools to achieve the peaceful settlement. 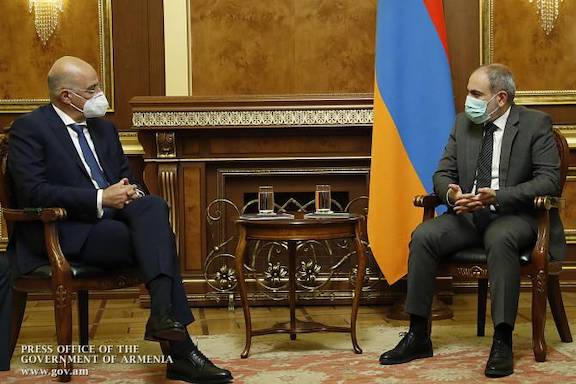 Denidas also met with Prime Minister Nikol Pashinyan, who called his visit to Yerevan an important expression of support to Armenia and its people.

“Greece and its people are standing by the Armenian people,” Denidas assured Pashinyan, saying that Greece supports the immediate end to hostilities in Artsakh, “because violence is not an option for resolving the issue.”

Denidas and Pashinyan also discussed Turkey’s destabilizing expansionist policy which is manifested in different regions. They emphasized that such a police was unacceptable and exchanged views on ways to counter Ankara’s interventionism. 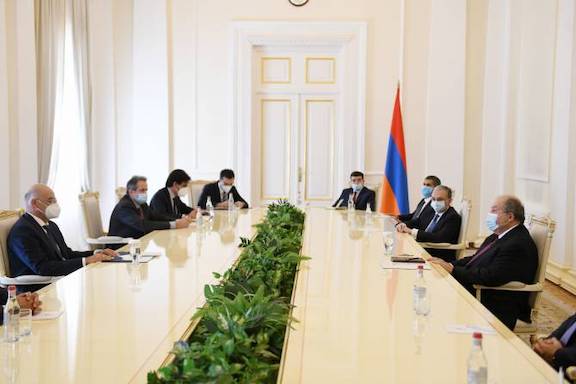 “We greatly appreciate your visit any time, but particularly today. At a time when we are really living in difficult times, friendship and trust are of great importance,’’ President Armen Sarkissian told Denidas during a meeting on Friday,

Sarkissian acknowledged that Greece is also facing its own conflict, albeit without the scale of violence that exists in the case of Artsakh and Armenia. ‘’But the source of that instability and violence is the same,’’ said Sarkissian.

Denidas pointed to the “shared grief” between Greeks and Armenians who have experience genocide at the hands of the Turks.

“Today you are confronted with a very hard situation and that’s obvious. My visit to Yerevan should be viewed as a symbol of our friendship and support for Armenia and Armenian people,’’ Denidas told Sarkissian.