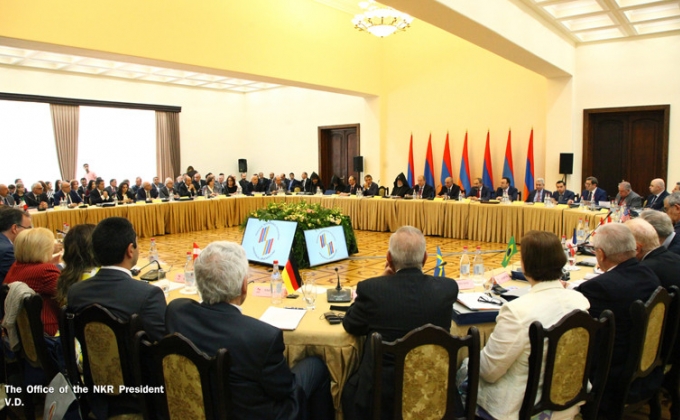 (Armenpress)- The session of the Board of Trustees of Hayastan All-Armenian Fund was held in the Armenian Presidential Palace on May 25 chaired by President Armen Sarkissian.

The President said the session of the Board of Trustees has been convened during historical days when the 100th anniversary of the first Republic of Armenia is being celebrated.

“I cordially congratulate all of us on this historic event. The Hayastan All-Armenian Fund has tasks before itself, but I think that one of the most important tasks is the mission to unite that is more than relevant today. The Fund should continue uniting the Armenian citizens, our compatriots living in Artsakh and the Diaspora. The programs which have been implemented are result of pan-Armenian efforts”, President Sarkissian said, adding that the Fund should improve its methods every year aimed at recording greater result and implementing ambitious programs.

rime Minister of Armenia Nikol Pashinyan said the Hayastan All-Armenian Fund became a support to newly-created Republic of Armenia since its establishment. It played a very great role in the first years of independence.

“During the years that followed the Fund’s role was as much important, and I think that the Hayastan All-Armenian Fund acted as the indicator of Diaspora’s confidence in Armenia’s authorities. When analyzing the activities of the Fund, one can get serious indications as to what processes are going on in the Diaspora, what kind of concerns are emerging and what kind of solutions can be given to such concerns.

Of course, the political developments that took place in Armenia in April-May gave fresh impetus to our national consolidation, and we must do everything to make sure that consolidation becomes a political product and a permanent political factor. We have already announced the Government’s priorities, the most important of which is the preservation of the flair for victory in the citizens of the Republic of Armenia and the Armenian people in order to give it a permanent character”, the PM said.

Executive Director of Hayastan All-Armenian Fund Ara Vardanyan presented a report on the 2017 activities. The Fund’s 22 local agencies, which currently operate in 19 countries of the world, have an active participation and contribution to its activities.

Ara Vardanyan said it’s already a week they are visiting different communities of Armenia and Artsakh with the representatives of local structures to get acquainted with the Fund’s projects.

“I think I express the opinion of all local structures that the agenda declared by the new government and its successful implementation will definitely contribute to the ongoing activities of the Fund in the Diaspora”, Ara Vardanyan added.

The members of the Board of Trustees presented their proposals. In particular, member of the Board Arsen Ghazaryan proposed for the businessmen, the business sector to also participate in the Fund’s fundraising.

“The activities of the Fund have proved that it is one of the most reliable structures. I, as an Armenian businessman, combining the numbers, state that we have 1000 major tax payers, if each of them makes a donation, we will have 10 million USD investment from Armenia annually. I propose to correctly carry out this propaganda”, Arsen Ghazaryan said.

His Holiness Catholicos of All Armenians also delivered remarks commenting on the proposals according to which the state structures, the church need also to make investments.

“The Church has always provided its assistance to the Fund. In 1992 when the Fund was established, the Church called on the people to express support. From that day the Church considered it its sacred duty to support, assist the Fund not only by calls, but also making investments”, His Holiness Garegin II said.