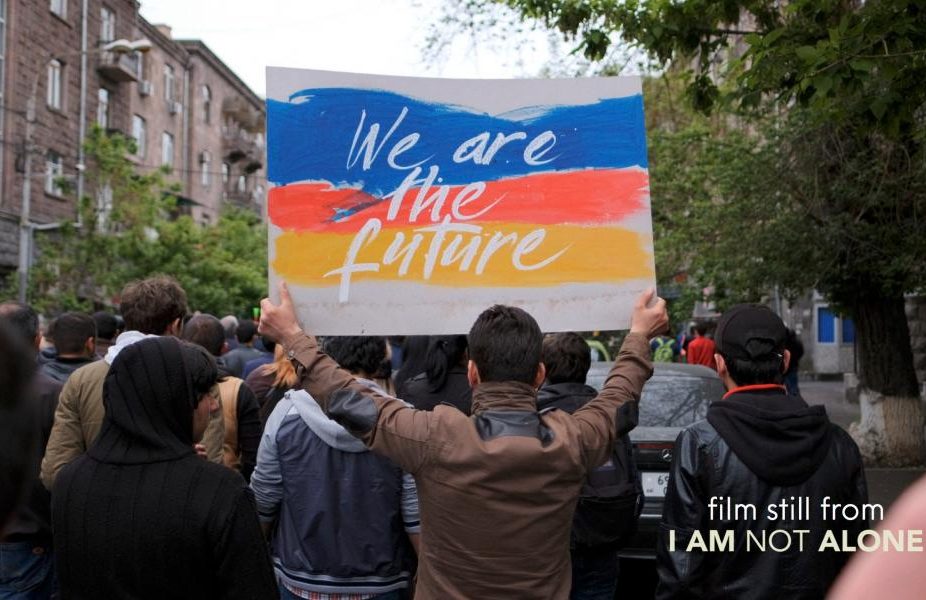 (TORONTOHYE)- Human Rights Watch announced that its 17th annual documentary film festival, January 30-February 4, in Toronto, will open with the screening of Garin Hovannisian’s I Am Not Alone.

The award-winning documentary about the popular uprising against the corrupted regime in Armenia will be introduced by director Atom Egoyan and actress Arsinee Khanjian.

The festival, in partnership with Hot Docs, will present five timely films, with an additional three films for school screenings, that show people’s challenge of authoritarian rules and fight for social justice in the world.

Commenting on the reasons for choosing I am Not Alone as the opening night film, Human Rights Watch Managing Director, Development and Outreach Jasmine Herlt says: “it {the film} provides the audience with a positive and powerful message of hope”, adding “It truly showcases how one courageous person can make a significant difference when standing up for human rights, and this courage can be contagious, as was the case in Armenia. What appeared to be one man’s quest for justice, soon turned into a truly national movement.”

Human Rights Watch has been working for years in Armenia documenting human rights abuses by the former regime and police brutality in suppressing the popular protests. Hence, “the film was also chosen because of its critical relevance to our work,” says Herlt.

She argues that a key message of the film is “to never give up, even when it seems that all is lost” and most importantly it shows “how peaceful protest can succeed and that the transfer of power from autocratic to democratic institutions need not always be violent.”

“It’s a huge honour for Arsinée and me to introduce the film.  And free screenings on opening night and throughout the festival provide an amazing opportunity for engagement as Human Rights Watch continues to do its vital work across the globe,” says director Atom Egoyan.

“The film completely captures the very special energy and circumstance that led to the revolution in Armenia.  It really puts you on the streets and squares, and makes you feel like you were there. The filmmakers have captured the visual journey of the movement and it also boasts a wonderful musical score by Serj Tankian,” adds Egoyan.

The other stories come from the Philippines, Bangladesh, Iran, and the American South.

“The films were selected to celebrate a global diversity of content and perspective while shining a light on individual bravery and resilience in challenging times,” says Herlt.

The festival will also feature James Jones and Olivier Sarbil’s On the President’s Orders about president Rodrigo Duterte’s bloody campaign against drug dealers in the Philippines, and David Charles Rodrigues’s Gay Chorus Deep South, presenting the tour of a gay men’s choir to the American deep South.

Maryam Zaree’s Born in Evin is about the notorious Iranian political prison where she was born. The festival’s closing movie is Rubaiyat Hossain’s Made in Bangladesh, which explores how the garment industry has empowered the Bangladeshi women.

“These impactful and eye-opening documentaries are important for people to see, and we’re happy to showcase these crucial world stories to Toronto audiences with these free screenings at our Cinema”, says Hot Docs president Chris McDonald in a press release.

The school screenings will be of Hans Pool’s Bellingcat – Truth in a Post-Truth World, which follows the rise of citizen journalism to find the truth behind the stories, John Mercer and Tim O’Donnell’s Life Without Basketball, the story of a young Muslim woman basketball player’s fight against the discrimination she faces on the court, and Maya Newell’s In My Blood It Runs, about a young Aboriginal boy and his struggle to fit in while respecting his ancestry.

Screenings are free, but tickets can be reserved in advance. All screenings will be followed by in-depth panels with filmmakers, film subjects, Human Rights Watch researchers, and special guests.