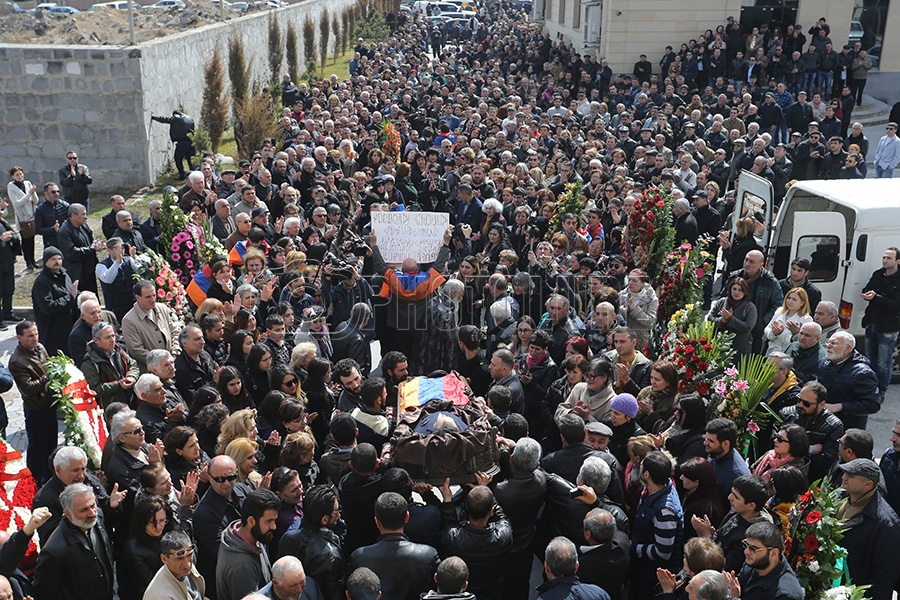 (RFE/RL)- Hundreds of people took part on March 22 in the funeral of Artur Sargsian, an Armenian activist who died last week while being prosecuted on charges of aiding opposition gunmen last summer.

They applauded throughout the funeral procession that ended at a cemetery in Yerevan where he was laid to rest. Sargsian, 49, drove his car through a police cordon to deliver food to armed members of a radical opposition group that seized a police base in Yerevan in July. Their two-week standoff with security forces left three police officers dead.

Sargsian surrendered to law-enforcement on July 31 along with the remaining gunmen holed up in the compound. He was released from custody in late December but was again arrested last month.

His death sparked a series of angry protests staged in Yerevan by hundreds of opposition supporters. They as well as many Armenian opposition politicians say that Sargsian should not have been kept in custody because he suffered from several chronic illnesses.

Some of those politicians attended a requiem service for Sargsian held at a Yerevan funeral parlor on Tuesday. One prominent opposition leader, former Defense Minister Seyran Ohanian, paid his respects to the activist just before the start of his funeral.

Armenia’s Investigative Committee is conducting an investigation into Sargsian’s death under a Criminal Code article that deals with negligent homicides resulting from inadequate medical aid. The law-enforcement body has not charged anyone yet. Hospital doctors insist that they did their best to save Sargsian’s life.

The deceased activist’s supporters say that the authorities should punish instead law-enforcement officials and judges responsible for his arrest.