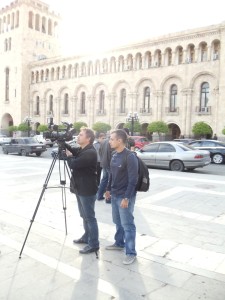 Q- Your film Women of 1915 is being widely acclaimed as did your previous production Orphans of Genocide. Why did you decide to make a “Genocide sequel”?

A-About 6 years ago, while conducting preliminary research on Orphans of Genocide, I kept on stumbling into amazing stories of women who, one way or another, were linked to the Genocide.

This, I thought, was the ultimate humanitarian task. Leaving a plush life behind, traveling thousands of miles to war zones, risking your life to save the lives of strangers. In some cases these women lost their lives while saving the lives of others. I thought that was an unparalleled self sacrifice. I couldn’t help, but dedicate a whole film to this topic. Thus, Women of 1915.

Q- You don’t call the documentary Women of Genocide and that’s for a reason I guess. Who are these women whom you wanted to document?

Q- Can you recall some names and what types of role they played? What about the numbers of all those who perished?

Another woman of 1915 is the American Mary Louise Graffam, a trained teacher, dedicated her life to educating students and teachers in Western Armenia and died in Sivas in 1921.

We also feature a number of Armenian women of 1915, such as Diana Apcar, the first woman ambassador in modern history, Victoria Artinian, Steve Job’s adoptive grandmother, Hatun Yapoujian, who bore arms and fiercely fought to protect her people and of course the typical women of 1915, such as Aurora Mardiganian, who’s story was turned into a block buster Hollywood movie in 1919, just to name a few…

Q- The topic requires extensive and may be unprecedented research. How do you conduct your research and what type of sources did you tap into?

A-Our research is a combination of primary and secondary research. For example, even though there is ample information on Aurora Mardiganian, we travelled all the way to Argentina to interview Eduardo Kozanlian, who accidently discovered the remnants of Aurora Mardiganian’s movie, Auction of Souls or Ravished Armenia.

Q- Do you have another addition to this series? What’s the next project you might be working on?

A-My third Genocide related film is in the works and deals with an extremely interesting story remotely connected to the Hamidian Massacres.

The Other Side of Home: Armenian Genocide documentary shortlisted for Oscar