Karabakh movement: 30 years after the first demonstration in Yerevan 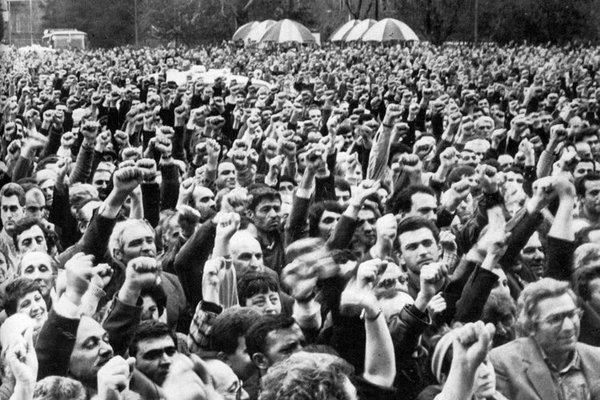 30 years ago on February 20, the Karabakh liberation movement – a mass movement for the unification of Karabakh with Armenia – reached Yerevan, with massive demonstrations staged in what is now called the Freedom Square.

The square has never been that crowded in the coming decades in independent Armenia.

February 1988 marks the beginning of the national liberation movement in Karabakh (Artsakh), when the Karabakh Council of People’s Deputies, with a vote of 110 – 17, passed a resolution requesting Azerbaijan for secession to join Armenia. The move was in full accordance with the USSR Constitution, specifically the article on the right to secession. The decision brought out tens of thousands of demonstrators, both in Stepanakert and in Yerevan, yet eventually Moscow decided to reject Karabakh’s demands for reunification with Armenia.

Every instance of democratic expression of the people’s will was followed by economic blockades, demographic expansion and violation of the rights of the Armenian population. Mass murders and pogroms in Azerbaijani cities of Sumgait, Baku, Kirovabad followed, to later spread across the country. Hundreds were left dead and injured, with hundreds of thousands of Armenians abandoning their homes.

On December 10, 1991 an independence referendum was held in Artsakh to be approved by 99.89% of voters. The Karabakh Supreme Council (the parliament), which was formed on December 28, 1991, adopted a Declaration of Independence confirming the results of the referendum and succession of legal documents implementing the right of the people of Karabakh to self-determination.

The newly-formed government of Karabakh started working amid absolute blockade and the ensuing war, unleashed by Azerbaijan. The war which lasted from the fall of 1991 to the spring of 1994, continued with varying degrees of success for the Armenian side.

The Karabakh defense army ultimately succeeded in liberating the previously captured territories from Azerbaijan and, during military engagements, took a few adjacent Azeri regions that had been used as firing lines against the Armenians. The creation of the security zone precluded the immediate threat facing the peaceful population of Artsakh.

Through the mediation of Russia, Kyrgyzstan, and the CIS Interparliamentary Council, Azerbaijan, Karabakh and Armenia signed the Bishkek Document in the capital of Kyrgyzstan on May 5, 1994. According to the document, parties to the conflict agreed to a ceasefire, effective from May 12 to date.

In 1992, the OSCE Minsk Group was formed to resolve the Karabakh conflict, with settlement talks launching under its auspices.

Azerbaijan has been regularly violating the ceasefire, which occasionally result in casualties.

On April 2, 2016, Azerbaijan launched a large-scale military offensive against Karabakh which left hundreds dead on both sides. Top Armenian and Azerbaijani officials reached an agreement on the cessation of hostilities on April 5 in Moscow.

Throughout 30 years, none of the people of Karabakh ever allowed the thought of returning under Azeri jurisdiction: none of them will agree to stand back from something they won at the cost of all bloodshed and losses.