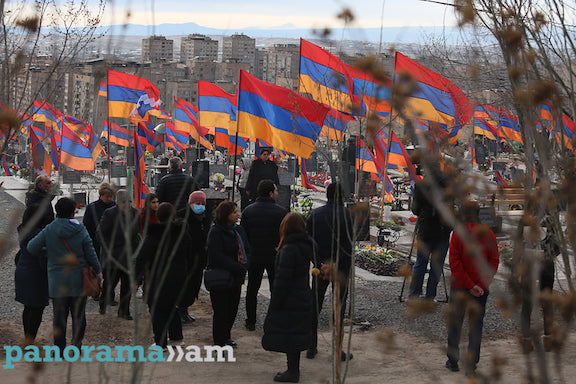 (Asbarez)- To mark International Women’s Day, the Homeland Salvation Movement organized march from Baghramyan Street, where protesters have been camping out for weeks, to the Yerablur National Military Cemetery on Monday.

The participants of the march stressed that they wanted to mark the day celebrating women’s rights with the mothers and sisters of who lost their sons, husbands and brothers during the Artsakh War.

The participants laid flowers on the graves of the those who heroically gave their lives in defense of the homeland.

“March 8 was supposed to be a celebration. But with our backs broken, our defeated country and an unclear future, there is no moral or psychological atmosphere of a celebration,” Armenian Revolutionary Federation Supreme Council of Armenia member Lilit Galstyan told reporters. “Today our capacity for our defeat, our pride and dignity is found at Yerablur.” 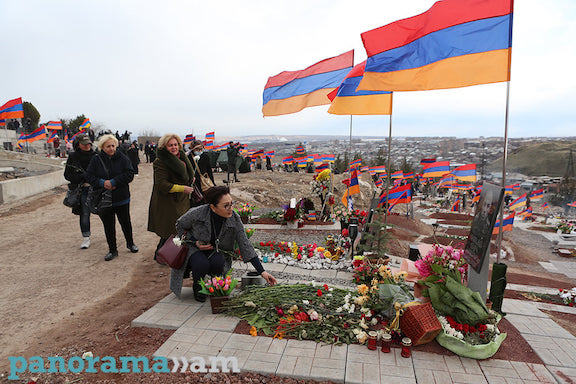 Galstyan said that the current chaotic state has brought the country to the brink of destruction, with Azerbaijani soldiers breathing down on the residents of Armenia’s Tavush Province. “The Turks [Azeris] are circling and we don’t know what is going on in Tavush,” said Galstyan to illustrate the despair plaguing Armenia and Armenians.

ARF Supreme Council of Armenia chairman Ishkhan Saghatelyan told reporters before the march that Armenia’s president bears all responsibility for the situation created in the country. He was referencing President Armen Sarkissian’s yet to be announced decision about how he will move forward on the issue of the Armed Forces Chief of Staff, the demand for whose resignation by Prime Minister Nikol Pashinyan he has rejected, with a pledge to direct the matter to the Constitutional Court.

Saghatelyan again repeated the Homeland Salvation Movement’s calls for Pashinyan’s resignation saying that the prime minister is holding the lawmakers of his My Step faction hostage.

The ARF leader said that Armenia’s stability is of utmost importance for the Homeland Salvation Movement, which does not want the country to experience further shocks. However, he said, this does not mean that the movement will retreat from its position, adding that they have come a long way with the people and are on the brink of victory.