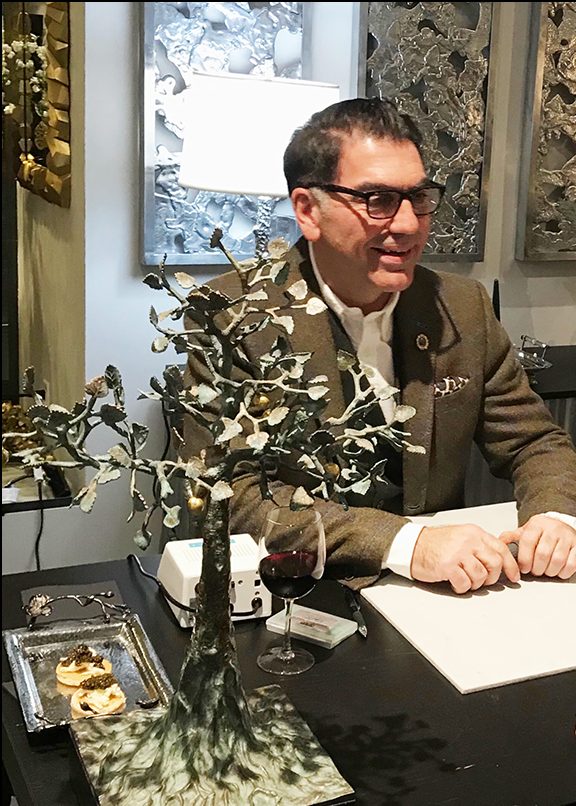 Michael Aram with his “Apricot Tree of Life” sculpture

GLENDALE—The Armenian National Committee of America-Western Region announced that renowned Armenian-American sculptor Michael Aram is generously donating proceeds from sales of his limited-edition “Apricot Tree of Life” sculpture to the ANCA-WR to help advance the Armenian Cause.

“We are so grateful to Michael Aram, whose Armenian pride and patriotism shine so brightly on the world stage as he brings Mount Ararat, the Armenian Cross, and so many Armenian symbols into the mainstream. Standing almost two feet tall, this limited edition Apricot Tree of Life is a beautifully meaningful symbol of eternal survival and is sure to be a conversational centerpiece in every Armenian home. By graciously donating a portion of the proceeds to the ANCA-WR, Michael Aram has given our community the opportunity not only to enjoy this exceptionally striking sculpture forever, but to support the Armenian Cause at the same time,” stated ANCA-WR Chair Nora Hovsepian.

Michael Aram is an award-winning artist who has dedicated his career to craft-based design. He has applied his skills as a painter, sculptor, and art historian to the decorative arts.

Michael Aram’s grandparents were survivors of the Armenian Genocide, and he carries their legacy with him throughout his artistic expression. Born in Providence, Rhode Island, Michael Aram Wolohojian grew up in a tightly-knit Armenian family in Scarsdale, New York.

“When I was young, I visited Armenia during the apricot season. It was during this time, while learning about the country’s rich history and culture, I discovered the significance of the Tree of Life in my culture. For me, this sculpture pays tribute to my heritage and the idea of the continuity of life and the perpetuity of family,” said Aram about his limited edition Apricot Tree of Life Sculpture.

Inspired by the idea of trees, this sculpture is a metaphor for life and the connection between Heaven and Earth. A familiar motif of Aram’s, drawing on his Armenian heritage, the traditional crosses are embellished with vines and leaves as symbols of life, renewal, and vibrancy. Even as a tree grows old, it bears fruit that contains its very essence, and in this way, becomes immortal.

“Renowned artist Michael Aram specifically launched this piece at the 2018 ANCA-WR Gala. He has been and continues to be a strong advocate for the ANCA-WR and all the issues the organization fights for including Armenian Genocide recognition,” said Edgar Hayrapetyan, LA Retail Sales Manager & Brand Ambassador of Michael Aram Inc., and member of the ANCA-WR Gala Organizing Committee.