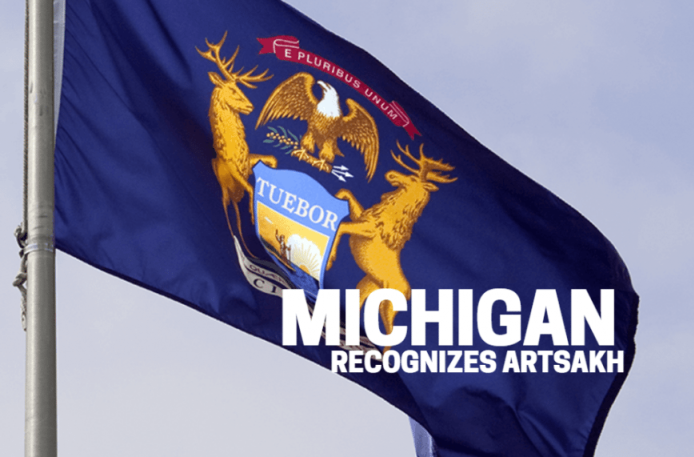 State Sen. David Knezek Leads Resolution Calling for U.S. Recognition and Expansion of Economic and Cultural Ties with the Republic of Artsakh

LANSING, Mich.—Michigan became the 8th U.S. state to recognize the independent Republic of Artsakh (Nagorno-Karabagh) today, with the overwhelming passage of S.R.99, spearheaded by Senator David Knezek (D–5th District). The bipartisan measure calls upon the U.S. to establish economic and cultural ties with the Artsakh Republic and support peace and stability across the South Caucasus, reported the Armenian National Committee of Michigan (ANC of Mich).

“The Michigan Senate vote for Artsakh independence represents a resounding reaffirmation of our enduring American commitment to democratic self-determination and an equally powerful blow against Azerbaijani President Ilham Aliyev’s ongoing aggression against this peaceful republic,” said ANC of Mich. Chair Lara Nercessian. “Armenians from the Great Lakes State and across the U.S. commend Sen. Knezek and his fellow State Senators for standing strong with the people of Artsakh.” “Artsakh’s story is a very American story—one of freedom, self-determination, democracy, and peace,” said MI State Senator David Knezek. “Michiganders are proud to join Artsakh in saluting these shared values as we work to expand U.S.-Artsakh cultural and economic ties and support a lasting peace in the region.”

Senate consideration of the Artsakh independence measure, shared live on the ANCA Facebook page, began at the opening of the Sept. 29 session with remarks by Sen. Knezek and an introduction of Republic of Nagorno-Karabagh Representative to the U.S. Robert Avetisyan, who was on hand for the historic vote. Below is video of the passage of the resolution, courtesy of the Armenian National Committee of America—Eastern Region.

We would like to thank Senator Knezek for supporting the democratic aspirations of Artsakh and his longtime leadership on the issues of concern to our compatriots living in the Republic,” said Avetisyan. “We are grateful to the ANC of Michigan for their tireless efforts in defending Artsakh’s security and promoting the international recognition of Artsakh. We hope Michigan’s recognition—the eighth U.S. state to do so—will be an example for democratic societies around the world.”

Earlier in the morning, members of the ANC of Mich., Armenian Relief Society (ARS), Hamazkayin Armenian Cultural and Educational Association, and Michigan State House candidate for the 40th District Mari Manoogian joined Senator Knezek, House Representative Klint Kesto (R-39th Dist.), and Avetisyan for a breakfast briefing prior to the vote.

As a Chaldean-American, I come from a community that has long been persecuted based on religion and ethnicity,” said Rep. Kesto. “I understand the needs and aspirations of the Armenian community, and I stand with the Armenian people in their quest to continue their manifest destiny and freedom as an independent nation and self-preservation.”

Adopted by a voice vote, S.R.99 discusses Artsakh’s historically Armenian roots and Soviet dictator Josef Stalin’s 1921 decision to force the South Caucasus region under Soviet Azerbaijani control.  Peaceful efforts by the Artsakh people seeking independence were met with pogroms in Azerbaijan’s capital Baku and the cities of Sumgait and Kirovabad and a six-year war for Artsakh independence, which concluded with a tenuous cease-fire in 1994. “The Armenians of Artsakh remain resolute in their efforts to exercise the right to self-determination and live free from violence and repression, and by recognizing the government of Artsakh, the international community can help put to rest this century-old conflict,” notes the Michigan Senate Resolution.

The measure calls on the “President and Congress of the United States to recognize a free and independent Republic of Artsakh,” and “to strengthen and solidify our country’s economic and cultural relationship with the Artsakh Republic.” It goes on to support Artsakh efforts with the international community to “reach a lasting solution to the existing regional problems and establish peace and stability in the strategically important region of South Caucasus.” Michigan joins Massachusetts, Rhode Island, Maine, Louisiana, California, Georgia, and Hawaii in adopting legislation supporting the independence of Artsakh. The full text of the Michigan Senate resolution is available below.

A resolution to urge the President and Congress of the United States to recognize the Republic of Nagorno-Karabagh, also known as Artsakh, to establish economic and cultural ties with the nation, and to support the peace and stability in South Caucasus.

Whereas, The region of Artsakh is located in the South Caucasus and has historically been Armenian territory. The region is populated by an overwhelming majority of Armenians; and

Whereas, Despite its historical and cultural ties to Armenia, in 1921, Joseph Stalin arbitrarily severed Artsakh from Armenia, and in violation of the national, territorial, and human rights of the Armenian people, the severed region of Artsakh was placed under the administration of Soviet Azerbaijani; and

Whereas, For decades, the Armenian peoples’ peaceful demonstrations for national independence, for individual freedom, and in opposition to the Soviet Azerbaijani repression and discrimination were met with acts of violent repression by Soviet Azerbaijani forces who refused to allow the self-determination of the people of Artsakh. Soviet Azerbaijani’s bloody response resulted in the deaths of ethnic Armenians in Sumgait (Feb. 1988), Kirovabad (Feb. 1988), and Baku (Jan. 1990) and the forced deportation of more than 350,000 Armenians from Azerbaijani. In the aftermath of the Sumgait tragedy, the United States Senate unanimously passed Amendment 2690 to the Fiscal Year 1989 Foreign Operations Appropriations bill (H.R. 4782), concerning the Karabagh conflict and called on the Soviet government to “respect the legitimate aspirations of the Armenian people…” and noted that “dozens of Armenians have been killed and injured during the recent unrests…”; and

Whereas, The people of Artsakh overwhelmingly voted to support independence. On Dec. 10, 1991, despite continued violence against the people of Artsakh, a popular referendum proclaiming an independent republic took place during the disintegration of the Soviet Union. Under the watchful eye of more than 50 international observers, and in full compliance with international standards for a free and fair election, more than 80 percent of eligible voters cast a ballot, and the measure passed with 98 percent in favor. On Jan.6, 1992, the democratically-elected Parliament of Artsakh adopted the Declaration of Independence of the Nagorno-Karabagh Republic; and

Whereas, Despite a cease-fire agreement between the Republic of Artsakh, Azerbaijani, and Armenia that ended years of intense fighting, the security and sovereignty of Artsakh continue to be threatened by regional tension and hostile acts. The Armenians of Artsakh remain resolute in their efforts to exercise the right to self-determination and live free from violence and repression, and by recognizing the government of Artsakh, the international community can help put to rest this century-old conflict; now, therefore, be it

Resolved by the Senate, That we urge the President and Congress of the United States to recognize a free and independent Republic of Artsakh; and be it further

Resolved, That we memorialize the United States government to strengthen and solidify our country’s economic and cultural relationship with the Artsakh Republic and its citizens and continue to promote the humanitarian and economic rehabilitation of the region; and be it further

Resolved, That we support the Republic of Artsakh’s continued efforts within the international community to reach a lasting solution to the existing regional problems and establish peace and stability in the strategically important region of South Caucasus; and be it further