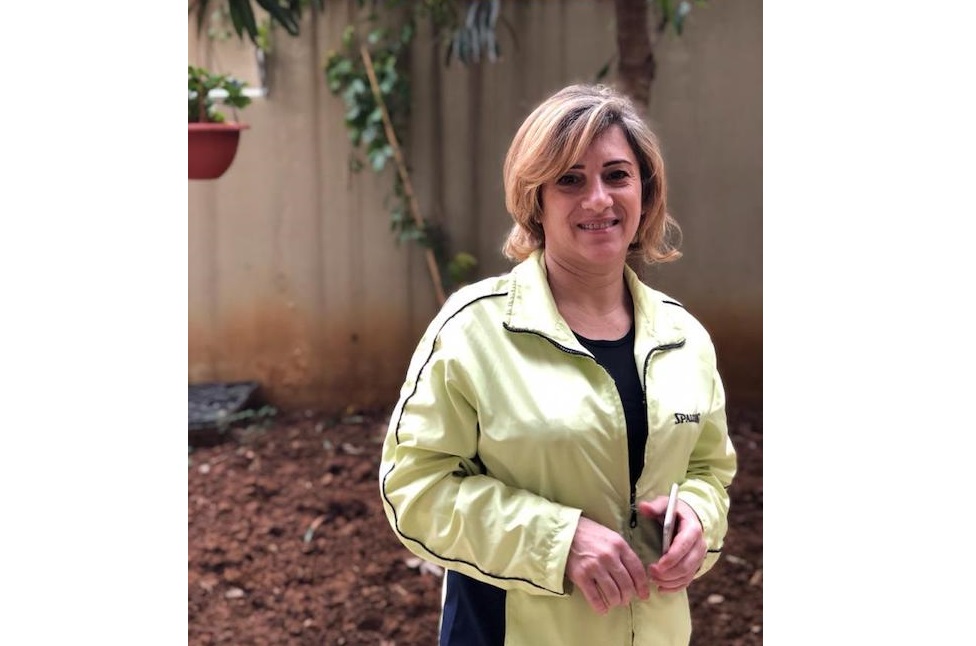 In a normal civilized world it would be absurd to rejoice the liberation of someone, who should have never been prisoner of war in the first place. But ours is a rather abnormal, ugly world.

Mother of two, 49-year-old Lebanese-Armenian Maral Najarian was released from a Baku prison on March 10 after being held unlawfully for four months by Azerbaijani authorities. Following the blasts in Beirut last summer and dreaming of a peaceful life in her homeland, Maral moved with her sister Annie to Artsakh ten days before the war started. However, when the shelling started in Berdzor, where they were staying in a hotel, the sisters had to leave their suitcases and once again flee to Yerevan for safety.

Following the November 9 agreement, which ended the military attacks in Karabakh, Maral opted to drive with her friend, Vicken Euljekjian, to Artsakh to collect their modest belongings. They were stopped near Shushi by two Azerbaijani soldiers and driven away with dozens of other Armenians on November 10. During the first two months of her captivity, nobody knew Maral’s name, nor would anyone recognize her photo, while her sister Annie Najarian in Yerevan and the family in Beirut, were bewildered where to turn for help. Yet since January, Maral became an unexpected celebrity by surging social media interest and campaigns launched by family and friends, including a global petition that garnered 17,000 signatures in few weeks.

Several officials, political leaders and activists embarked on a campaign for Maral’s release in various countries. The intervention from the Lebanese government turned out pivotal for her liberation.

“It was our duty to work for Maral’s release. Naturally, as a Lebanese member of parliament, I was able to address the Lebanese official channels to pursue the matter. Hence, the foreign minister, as well as ambassadors in Tehran, Moscow, Yerevan and Baku carried out the vital work. It can be said that on a daily basis, the foreign ministry worked with the International Committee of the Red Cross and its Lebanese branch to ensure Maral’s safe and healthy return,” Lebanese Parliament member and chairman of the Armenian Revolutionary Federation Central Committee of Lebanon Hagop Pakradouni told me on March 11 when we spoke. 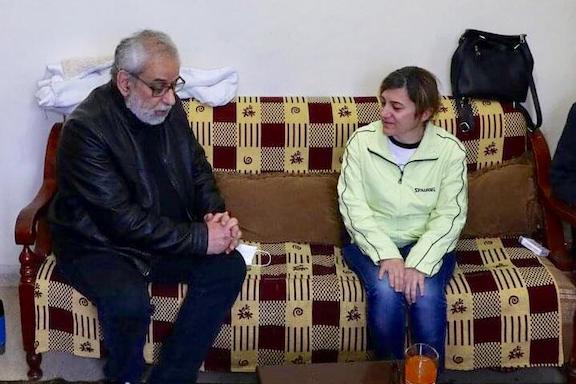 After seeing the painful images of Armenian POWs who had been released in previous months, it was a relief to watch Maral, even tearful and emotional, arriving in the Beirut’s Rafic Hariri International Airport in relatively good shape. These were tears of joy after four months of ordeal, which appeared interminable not only for her, but also for her family and everyone campaigning for her freedom. I spoke again to Maral a week after her return home, refreshed and joyful, with her soft voice and distinctive Mona Lisa smile back on her face.

Below is a transcript of our conversation.

JASMINE SEYMOUR: Maral, I am absolutely delighted to talk to you today, relaxed and smiling again. I wonder what your life has been since the 10th of March.

MARAL NAJARIAN: March 10 is an unforgettable day for me when I got back my freedom. It was an enormously happy day, which I did not even expect, I was welcomed by my family, relatives and loved ones with their warm hugs, I had an extraordinary day. Afterwards, I spent couple of days at my mother’s house, where I had numerous visitors, including Armenian organizations, television reporters, and newspapers. Next, I had to spend a night in hospital, where I went through thorough examinations, thanks to the generosity of my local ARF and particularly of Mr. Hagop Pakradouni. Luckily, results were mostly fine, minor issues, but overall, they are not significant, so I left the hospital in good shape. My children took me to the countryside for the weekend to relax, where I was surrounded by my family and such loving atmosphere. Now, I have finally returned to my home and spending time with my neighbors, my children, and loved ones.

J.S.: Very glad to hear you are doing well physically, yet emotionally, you will certainly need time to recover from the torment you went through. Do you feel ready to go back to your work in your beauty salon?

M.N.: Certainly, I need some time to return to normal life. But mentally and emotionally, I cannot say I am either bad or good, somewhere in between. It is impossible to forget, but I can say, I have put those memories in a “box.” Every so often I think about those horrible months, but I try to lock those negative thoughts in “the box.”

J.S.: You have six siblings and extended, very close, family circle. Who did you miss the most in the past six months?

M.N.: Without a doubt, my two children and my mother. My mother’s health was quite poor when I came back, but the next day she told me that all her pain had vanished.

J.S.: Your release from the Baku prison was rather startling to your family, your sister got the phone call only on March 10, when were you informed about your freedom?

M.N.: They told me a few days before that, but probably there was a waiting list for detainees, as my release was postponed for several days since Sunday. Finally, on Wednesday, when the guard knocked on my prison door at 5 a.m. telling me to gather my belongings, I could not believe that I was leaving. I was ecstatic to wake up to such news.

J.S.: How were you transferred from your prison to Baku airport, was the International Red Cross involved in the procedure?

M.N.: Two soldiers accompanied me to the airport and upon our arrival, the Red Cross representative was at the departure gate, but I got on the plane alone. I was carrying a bunch of flowers I was offered in prison on March 8 for International Women’s Day and a plastic bag with a jacket they gave me. They gave me back my freedom and a bouquet of roses, that I wanted to take back home.

J.S.: We all thought that your release was a miracle, as the Azerbaijani authorities have repeatedly announced that everyone captured after November 9, were considered terrorists, and would be prosecuted. You were captured with Vicken driving from Yerevan to Artsakh on November 10. So, what do you think about the fate of Vicken and remaining Armenian POWs held in Azerbaijan?

M.N.: I would say that nothing is impossible. We must pray that they are liberated, and they return to their families, their children, their parents. I thought my release was impossible and it became possible, therefore for others it can be possible too. There is nothing impossible in life, the miracle that happened to me, could happen to them as well, I strongly believe that.

J.S.: During the four months of incarceration how were you treated?

M.N.: I felt that November and December were particularly harsh for me, and I fell ill, I felt mistreated. But it was common for all prisoners, including their own detainees. When they realized that I had nothing against them, that I was an ordinary civilian, their attitude changed significantly after January, for example, when I needed medication, they would provide it instantly.

J.S.: When was the last time you spoke to to Vicken?

M.N.: It was on my birthday on November 18. We were still kept in a military camp then, and had not yet been transferred to the prison. The commander told the guards to get Vicken. We communicated for a few minutes, then they took him away and I returned to my cell. The next day we were driven to another prison, but I did not spot him during the journey.

J.S.: What would you say about allegations against Vicken, that he is an extremist?

M.N.: If he were an extremist, he would not have been driving to Artsakh with no weapon, no gun, nothing. These accusations are completely fake. He volunteered at the start of the war, he was a volunteer, but that’s all. But he returned to Yerevan after few days.

J.S.: Do you remember the exact place you were captured?

M.N.: We were wondering that if Shushi had been handed over, why did the Armenian side not have a signpost to stop its citizens entering Shushi? The road was accessible, and we kept checking on social media, so we thought that the information about the handover of Shushi was incorrect. Before entering Shushi, the Azeri military stopped us, and they took over Vicken’s car, money, jewelry, and everything we had.

J.S.: Why were you driving to Shushi?

M.N.: When the war started, Vicken was staying in the Shushi hotel, right behind St. Ghazanchetsots Cathedral, waiting to move into his new flat shortly. He had left his three suitcases in the hotel during the war and had moved back to Yerevan until the war ended. When the ceasefire was announced, we decided to drive back to Artsakh to collect my and my sister’s luggage from our hotel in Berdzor, and then to collect Vicken’s suitcases from the Shushi hotel.

J.S.: Maral, what are your thoughts about the future?

M.N.: I feel like a new-born right now. It is a new beginning for me. As it happened to me, I wish that all other prisoners of war are freed very soon. Even in the darkest place, we must never lose hope.

After Maral Najarian’s surprising yet anticipated freedom, I asked the question, which has been pestering me for months, to the human rights lawyer Siranush Sahakyan, whether disclosing identities and campaigning for individual prisoners of war held illegally in Azerbaijan would prevent their ill-treatment and speed up their liberation. She confirmed that it was increasingly obvious that individual stories of confirmed POWs and other captives articulated through various platforms— international organizations, the Armenian diaspora, and the global media—undoubtedly increase the pressure on the Azerbaijani government, therefore generate constructive influence on accelerating the procedure.

Evidently, several organizations, governments and individuals should be thanked for working tirelessly for Maral’s release. Meanwhile from our conversations it became increasingly apparent that Maral hugely helped herself: “If I did not have this calm, composed nature, I would not have survived,” she confessed. There is no better description of Maral than the one coined by Pakradouni during his visit to Maral last week: “You went to Artsakh as a normal citizen, and you came back a hero. You are the symbol of our struggle, the fighting spirit of our nation.”

To add pressure and help the effort to garner the release of Armenian POWs and captives being held by Azerbaijan sign the change.org petition.