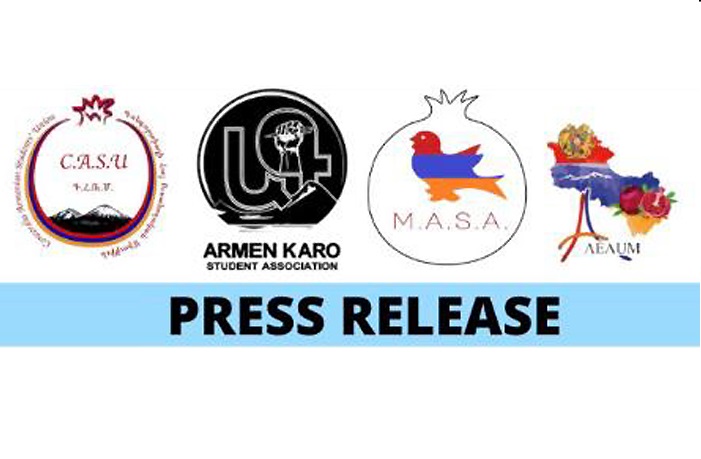 The ASAs are proud to inform you that the event at Concordia University which was scheduled to host the Turkish Ambassador, on a matter concerning Armenian ethnic cleansing in #NagornoKarabakh, a conflict between the Republics of #Artsakh, #Armenia and #Azerbaijan, is cancelled. We appreciate the cancellation of the event organized by International Relations Society and the Strategic and Diplomatic Society, two subsidiaries of Concordia Political Science Students Association – PSSA.

The ASAs acknowledge the efforts made by the aforementioned organizations to rectify the errors of inviting a Turkish official to spread misinformation and propaganda on the subject, in addition to the clear armenophobia that is codified in Turkish policy.

Following our efforts to restructure the biased event into a more diplomatic dialogue presented as a series of conferences on Nagorno-Karabakh, the societies sought permission from the Turkish Embassy to invite her Excellency, Anahit Harutyunyan, the Ambassador of the Republic of Armenia to Canada, for a completely separate event. Furthermore, by deleting Armenian students’ comments which questioned the ethics of this event on Facebook and Instagram, the moderators countered their declared neutrality, obstructed free speech, and exhibited clear favouritism. In an academic setting, we condemn any efforts to present a biased and one-sided argument, all while silencing the other party.

It is important to note that any steps taken to raise awareness on Nagorno-Karabakh is praiseworthy, but this awareness cannot come from the side of the aggressor’s accomplice, the misinformation spreader, and genocide perpetrator. The ASAs remind their audience that the Nagorno-Karabakh (Artsakh) conflict is not a matter of controversy or contention; rather, it is a matter of human rights violations, a denial of inalienable right to self-determination, and cultural genocide. By choosing to provide a free platform to a representative of a State with an official policy of #ArmenianGenocide denial, and invite them to speak about the Artsakh conflict, the IRS and SDS failed to evaluate the harmful and offensive consequences of the “perspective” of the Turkish official.

We invite any and all student organizations to host appropriate and academic discussions on the subject of Artsakh, with the condition that there may be adequate representation of the oppressed party.

For those of you interested in learning more about Nagorno-Karabakh (Artsakh), please visit the official website of the Ministry of Foreign Affairs of the Republic of Artsakh : http://www.nkr.am/

Lastly, we would like to thank all students and members of the community who voiced their concerns, and to the International Relations Society and Strategic and Diplomatic Society for their understanding and collaboration.