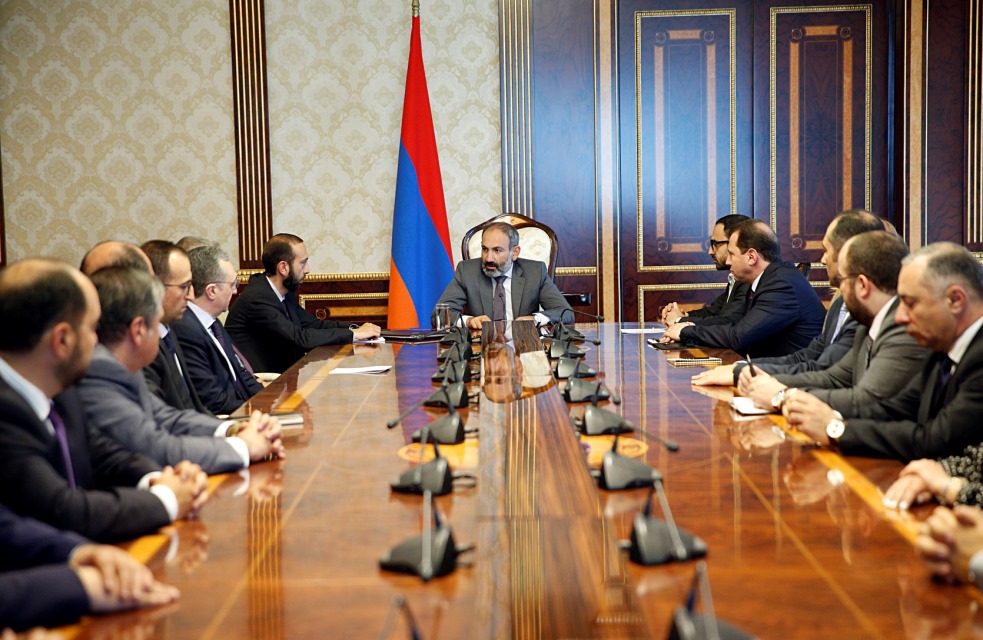 YEREVAN, (Azatutyun)- After completing the formation of his government, Armenia’s new Prime Minister Nikol Pashinian reaffirmed his pledges to carry out sweeping reforms and push for fresh parliamentary elections on Sunday.

The three deputy prime ministers and 17 ministers handpicked by Pashinian were formally appointed by President Armen Sarkissian on Friday and Saturday. Four of them held senior positions in the country’s previous government that was swept from power by nationwide massive protests led by Pashinian.

The new cabinet includes experienced technocrats, young Pashinian associates and other political appointees representing the three minority factions in the Armenian parliament that helped to install the 42-year-old protest leader as prime minister on May 8.

Pashinian also reached a de facto power-sharing deal with the Armenian Revolutionary Federation (Dashnaktsutyun), which was allied to former President and Prime Minister Serzh Sarkisian until his resignation on April 23.

Dashnaktsutyun will be represented in the new government by Minister for Economic Development Artsvik Minasian and Agriculture Minister Artur Khachatrian. Minasian served as environment minister while Khachatrian was the governor of the northwestern Shirak province until this month.

Two other Civil Contract figures, Arayik Harutiunian and Suren Papikian, were appointed as ministers of education and local government respectively.

Three other other, more important cabinet posts were given to non-partisan figures. One of them, Zohrab Mnatsakanian, Armenia’s ambassador to the United Nations until now, will serve as foreign minister. The 52-year-old career diplomat was the country’s deputy foreign minister from 2011-2014.

The new Defense Minister Davit Tonoyan worked as minister for emergency situations in the previous government. Tonoyan, 49, was Armenia’s first deputy defense minister from 2010-2017. A graduate of Russia’s Military-Diplomatic Academy, he represented the Armenian military at the NATO headquarters in Brussels from 1998-2007.

Pashinian met with the newly appointed cabinet members on Sunday, saying that his “government of accord” must strive to live up to the huge expectations of the country’s population that has overwhelmingly supported his protest movement. That, he said, requires a “new style, new philosophy, new culture” of work by all government agencies.

“Please get down to business, familiarize yourself with the current state of affairs today so that we don’t lose time,” he said. “There are operational issues that need to be solved as soon as possible.”

“The public must feel that this is a government formed by it and accountable to it,” added the former journalist.

Pashinian reiterated in that regard that his government must embark on sweeping “reforms in various areas.” He pledged earlier to democratize Armenia, strengthen the rule of law, separate business from government and radically improve the broader investment climate.

Pashinian also told his ministers to start working on the government’s comprehensive policy program which he has to submit to the parliament within the next three weeks. Its approval by lawmakers would amount to a vote of confidence.

Sarkisian’s Republican Party of Armenia (HHK), which still holds the majority of parliament seats, has signaled its readiness to back the program despite its serious misgivings about Pashinian’s premiership. The program’s rejection by the National Assembly would pave the way for snap general elections.

Pashinian said on Sunday that the conduct of such polls will be his cabinet’s top “political priority.” But he again did not say just when he thinks they should be held.