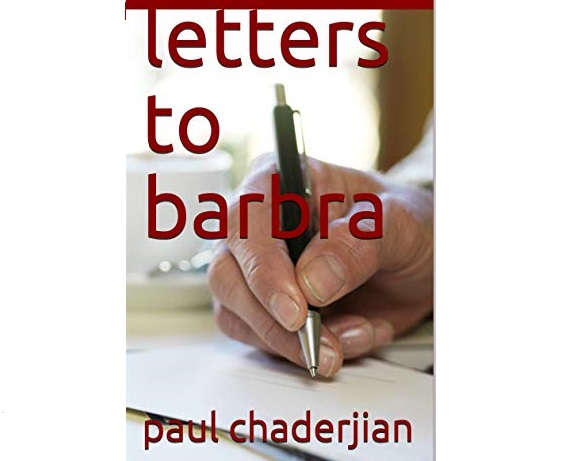 Letters to Barbra explores the Armenian identity through the story of an outsider. It’s told in a disjointed, Facebook-like timeline, spanning from the aftermath of World War I to the Soviet Union, from the Lebanese Civil War to a futuristic segregated dystopian society 300 years from now. Its non-traditional narration is cinematic, influenced by Micheline Aharonian Marcom and Atom Egoyan, who called it “stirring and extremely moving.”

Letters to Barbra depicts the protagonist, Adam, in his boyhood writing letters to his idol Barbra Streisand in war-ridden Beyrouth. Its fictional epistolary offers readers rare insight into the mind of a 9-year-old experiencing a devastating civil war, who deals with the trauma in the form of fan letters to an American Hollywood legend. It is an homage to all the frightened little boys and girls caught in inhumane situations as adults kill each other over real estate, financial gain, power, ego and religion. It is also a requiem to the millions of lives lost and generations of survivors traumatized by man’s inhumanity against man.

Because wars and their consequences do not exist in a vacuum, Letters to Barbra offers readers hope and context by chronicling the life of the young writer, Adam, through adulthood. As he grapples with his extrication from the land of his birth, a mere 50 years after his grandparents’ displacement from their centuries-old ancestral homeland, Adam finds solace in immortalizing his experiences in letters to one of the brightest stars of the 20th century.

Letters to Barbra takes readers from the dark days of the Word War II-era Soviet Union to the star-studded parties of Hollywood; from the streets of modern-day Paris, to the post-Civil War and newly rebuilt Paris of the Middle East, Beirut. This work of words captures that which is universal, but tells it from the perspectives of newly-birthed characters: young Armenian medical students boasting about their conquests in bed; brooding New York filmmakers hoping to find validation for their unique visions of the world; defeated, broken slaves, laboring in a grim, future megalopolis; and a songstress—a modern-day minstrel—singing her people’s songs while making a name for herself across CNN, the New York Times and at concert venues in the Middle East, Europe and the Americas.

“It’s a world in which the past, the present, and the future co-exist in conflict, never in harmony; a world that is marked with the trauma our parents and grandparents lived and unwillingly transmitted to us to shape our identity that we have to live with tragically, in conformity, if we object, if we turn away, we are doomed; we cannot find peace. The sense of belonging is displaced, meaningless, only a source of pain and compunction an anxiety,” writes Armenian language and literature lecturer and researcher Dr. Rubina Peroomian.

Paul Chaderjian is a broadcast journalist with the Al Jazeera Network in Doha, Qatar, where he has covered politics, wars and natural disasters for the past five years. He has worked at ABC News in New York City and Armenia TV and CivilNet in Yerevan, Armenia. He also contributes occasionally to the Armenian Weekly and Asbarez newspapers.  He’s also one of the hosts of the annual Armenia Fund Thanksgiving Day Telethon.

Letters to Barbra, published December 7, is available on Amazon and will soon be available at local bookstores.