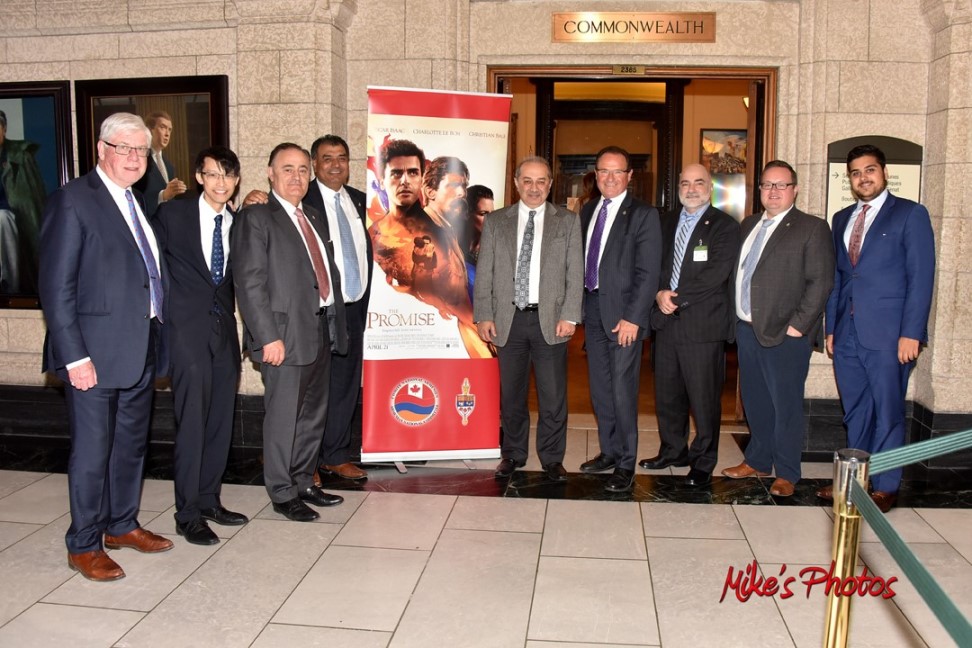 Ottawa – On June 5, 2017, a special screening of the Armenian Genocide era Hollywood epic, “The Promise” took place on Parliament Hill.
The special event that was organized by the Canada-Armenia Parliamentary Friendship Group and the Armenian National Committee of Canada, was attended by a significant number of members, senators, parliamentary staffers and civil servants.
Brief introductory remarks were delivered by ANCC member, Mr. Manoug Alemian, where he thanked MP Arnold Chan and members of the Canada-Armenia Parliamentary Friendship Group for their steadfast support and cordial commitment to the advancement of issues concerning the Armenian-Canadian community.
After viewing the movie, members had the opportunity to share their comments, views and impressions about the movie that was first premiered at the Toronto International Film Festival, last September.
Following the screening, MP Arnold Chan, chair of the Canada-Armenia Parliamentary Friendship Group and Dr. Vatche Chamlian, Vice-Chair of the ANCC National Board addressed the gathering to thank the attendees for their support and to stress the importance of supporting movies that aim to reveal the truth about historical atrocities such as the Armenian Genocide. Set during the waning days of the Ottoman Turkish Empire, “The Promise” tells the story of a love triangle sparked between an Armenian medical student, Michael (Oscar Issac), Anna (Charlotte Le Bon), and renowned American photojournalist Chris Myers (Christian Bale). The First World War and the Armenian Genocide of the 1915-1923 form the historical backdrop of an epic story of love, loyalty and survival.
Canada is one of the many countries that has officially recognized the Armenian Genocide on all levels of Government. Furthermore, on April 24, 2015, on the centennial of the Armenian Genocide, the Canadian House of Commons unanimously passed a motion, declaring the month of April as Genocide Remembrance, Condemnation and Prevention month.
Prev post