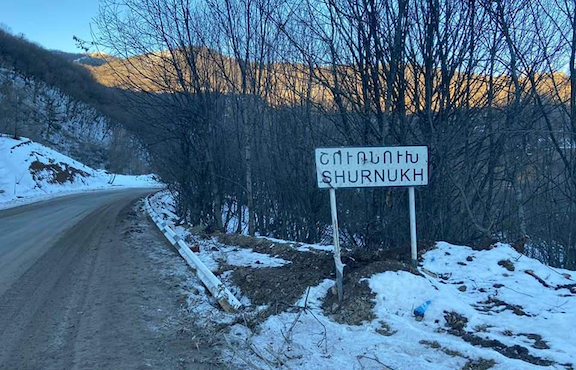 (Asbarez)- The surrender of key parts of Armenia’s Syunik Province to Azerbaijan continued Tuesday with the hand over of parts of the Shurnukh Village, with locals reporting that they came face to face with Azerbaijani soldiers as early as Sunday, days before the January 5 deadline for residents to evacuate.

This is the latest concession of Armenian territories to Azerbaijan since the signing of the November 9 agreement that while ending the military hostilities in Karabakh, it forced the surrender of lands in Armenia and Artsakh.

Late Monday night local time, residents living in 11 houses in Shurnukh left their homes and moved elsewhere and according to the mayor of Shurnukh negotiations were underway to determine where the troops would be stationed.

The administrative head of Shurnukh Hagop Arshakian stated this in a conversation with “Tert.”

“There are 11 families, the 12th house was on the side of the road, and the residents of that house also left,” Shurnukh mayor Hagop Arshakian told Tert.am. “They left the beehives and took what they could. Now the Azerbaijanis are moving in and raising their flag. My house is also left in the part handed over to Azerbaijan. Our family settled in the village administration building, while others moved into vacant houses of the village, some moved to Goris, Kapan and Yerevan.”

“Now a highway divides the Armenian and Azerbaijani borders. Nothing is known now. As a result of today’s talks, it will probably be clarified who will stand where and what will happen,” Arshakian said.

The now familiar scenes of Armenians burning their houses and belongings became the order of the day on Monday, with Arshakian having to apologize to his fellow villages for this unfathomable predicament.

“Today I am burning the house I defended with my own hands and I am doing the right thing,” Shurnukh resident Ararat Aghabekyan wrote on his Facebook page.

“This is temporary. I will place the stones again. Let them uproot it. I will build my house with the same stone again. I will take your pain, everyone should do the same, I will prove that the people of Syunik remain in Syunik,” said Aghabekyan.

“I set my house on fire. My children ran around in this house and now I am completely destroying it. I will build it from scratch in a new place. It was a matter of my honor to prevent a Turk [Azeri] from writing a word in Turkish on the wall of my house,” added Aghabekyan.

“The Azerbaijanis gave us until January 5 to leave and transfer the lands to them and said anyone, including animals passing through that territory after January 5 will be theirs,” the Shurnukh Mayor Arshakyan said on Sunday.

The leader of the village The added that he had shown the map of the USSR showing Shurnukh as an Armenian village to a Russian army general and peacekeepers.

“We were told that it’s not up to them and that the decision has already been made. Now the villagers and I are trying to find documents from the archives in order to retrieve our lands,” Arshakyan told News.am on Sunday.