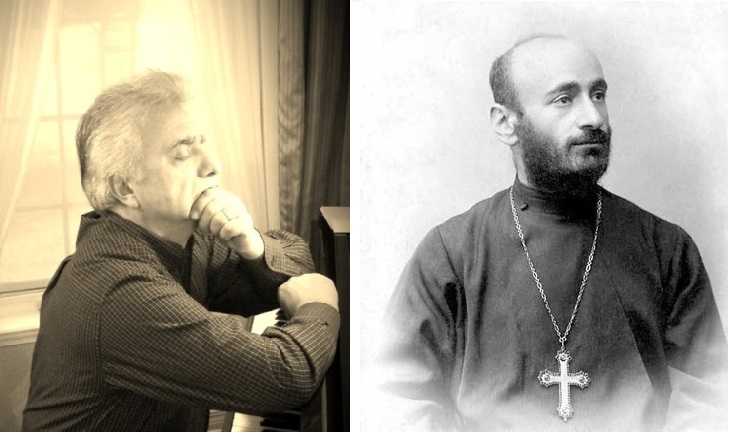 What role does Komitas play in the history of Armenian music and culture?

Komitas’ role can be defined as the cornerstone of 20th century Armenian music. His research elucidated the roots and characteristics of Armenian music and its place in the international musical family. Komitas is the only person to have had the opportunity to carry on his research locally, before the deportation and genocide of his people, and therefore his collection of peasant songs comes from a pure source. He established the theory of our music in such an extraordinary fashion as to distinguish it from that of neighbouring peoples. Contemporary Armenian composers who consider Komitas’ oeuvre as the foundation of their creative expression, adopt one or more of its attributes on which they build their own work. Vivid examples would be Aram Khachaturian and Alan Hovhannes, two musical titans who were polar opposites, and yet in whose work Komitas’ presence is irrefutable.

What role does Komitas’ music play in preserving Armenian identity in the diaspora?

To me, Komitas’ legacy played a role in salvaging our culture when young Armenian children started singing his songs in the newly established diaspora, particularly in Middle Eastern countries. The repertoire was very small, but well known to all. After the 1950’s, when Armenian Church and educational institutions were established, newly formed choirs expanded the use of Komitas’ music. Of course not much could be expected from point of view quality of performance, given that these were amateur choirs. As for Komitas’ role in laying the foundation for and inspiring the creative mind, in my opinion, no one has surpassed Alan Hovhannes in following Komitas’ path, not even those who studied with him or knew him personally. They all left a remarkable legacy worthy of public performance, but which cannot be closely related with Komitas who does not exist in their creative mind.

Komitas is best known as the preserver of our musical heritage. But he’s also a composer who experimented a lot. In a letter to Marguerite Babayan, Komitas writes, “We Armenians must yet create a national idiom, and only then confidently move forward.” Could you comment on how important is Komitas’ contribution to creating that national idiom?

Komitas’ creative work should be compared to that of Maurice Ravel, Claude Debussy, Bela Bartok and in a way to Johann Sebastian Bach. Placing him in that context helps us understand his role in originating the renaissance of our music.

a. Komitas was the first to raise [traditional] Armenian music to a classical level. The wonderful repertoire of songs with piano accompaniment, as well as his works for piano are brilliant examples.

b. He initiated the concept of classical polyphony [multiple voices] in a wonderful repertoire such as his Mass for three voices and the numerous choral works with their complex structure requiring a highly specialized interpretation.

Would you consider Komitas as an avant-garde composer in his time?

Unquestionably. Komitas’ European connections and inspiration placed him in the rank of avant-garde creative minds of his time, and traced the path for those composers who follow him, and who still have a lot to give!

Referring to the same quotation as above, how have Armenian composers around the world followed in Komitas’ steps?

The fundamental points in Komitas’ music that nurture contemporary composers are:

1. Harmonic freedom and its elaboration

2. The use of Armenian thematic motifs and its elaboration

3. Reproducing them in Komitas’ spirit

4. Komitas’ approach to rhythmic patterns and its elaboration

5. Certain similarities in the form of the work

6. Similarities in the choice of instrumental colour and their elaboration

All of the above-mentioned points must be present in a work if it is to be considered as following in Komitas’ footsteps.

You have arranged and presented Komitas’ music to various audiences. Armenians definitely love his music because it connects them to their ancestral roots. How do non-Armenian audiences receive it?

You know, in his lifetime, Komitas had conflicting relations with the leadership at Etchmiadzin and later in Constantinople, because the latter were too far removed from the progressive steps of European art. By contrast, the European audience greeted him with open arms, wondering where that powerfully expressive music was coming from. Today’s context is not quite the same, but our Armenian audience who is not familiar with contemporary music, and in particular Armenian art music, has trouble understanding my work. By contrast, the non-Armenian listener feels that Armenian music has a great meditative power.