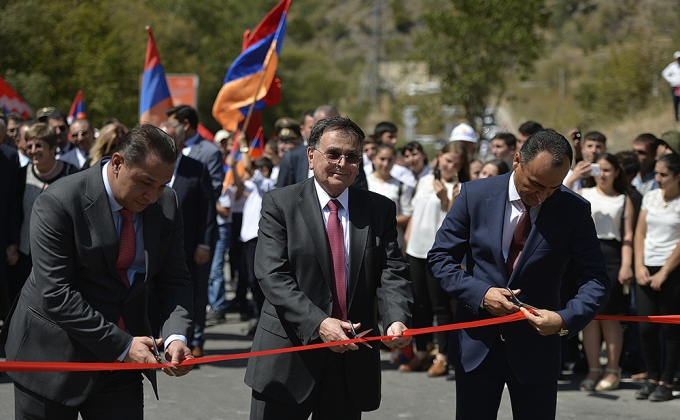 While on a working visit to the Republic of Artsakh, President of Armenia Serzh Sargsyan on September 1 attended the opening ceremony of Vardenis-Martakert highway together with Artsakh President Bako Sahakyan, press service of the President’s Office told. The highway has been constructed by the donations of all Armenians, including the funds raised by Hayastan All-Armenian Fund during the 2013 and 2014 telethons and with the support of the governments of Armenia and Artsakh.

Accompanied by Pargev Srbazan, the Primate of the Artsakh Diocese of the Armenian Apostolic Church, Presidents Serzh Sargsyan and Bako Sahakyan visited Dadivank to get acquainted with the reconstruction work underway in the monastic complex and lit a candle at the Holy Virgin Church of Dadivank. The Presidents of the two Armenian States will also visit the newly opened wine factory in Askeran region of the Republic of Artsakh.

President Serzh Sargsyan on September 2 in Stepanakert will take part in the celebrations on the occasion of the 26th anniversary of the Independence of Artsakh Republic.