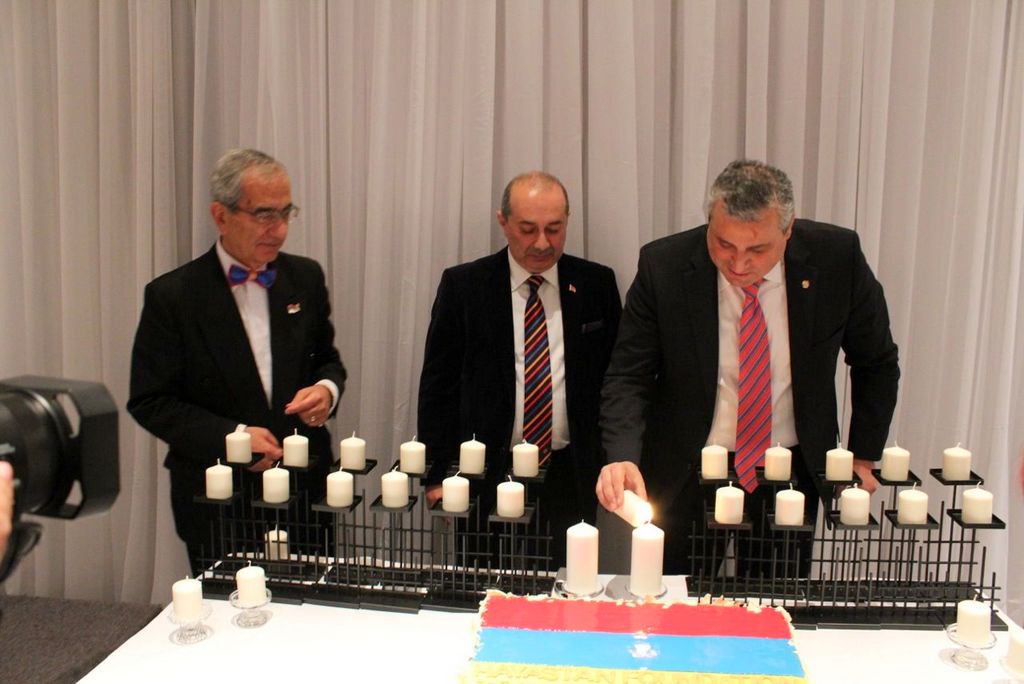 A record $1,300,000 CAD ($1 million USD) total was raised at the annual Hayastan Foundation Toronto banquet held at the AGBU Manoogian Centre today, as well as by the early major donations throughout the year. Over 300 supporters, including a large number of university students attended the gathering. The annual event, which was dedicated to the 25th anniversaries of the Republics of Armenia and Artsakh, was under the auspices of H.E. Armen Yeganian, the Ambassador Extraordinary and Plenipotentiary of the Republic of Armenia to Canada.

Following the national anthems of Canada, Armenia and Artsakh, performed by soprano Armenia Sarkissian, M.C. Tenny Nigoghossian’s opening remarks were followed by an address by Ambassador Yeganian. He emphasized the key role the Fund has played in Armenia and in Artsakh since the independence of both republics 25 years ago. He also challenged the audience to surpass last year’s contributions. After a brief cultural program, performed by sopranos Sona Hagopyan and Armenia Sarkissian, the tables were blessed by Bishop Apgar Hovagimian, the Primate of the Diocese of the Armenian Church in Canada.

Migirdic Migirdicyan, chair of the local chapter of the fund, gave a detailed report of the organization’s eight most-recent projects, which had made the Toronto chapter’s past year highly productive bringing the total to 54 projects, since inception. These include a kindergarten in Ivanyan village; the upgrade and renovation of the school at Madaghis village; an ambulance for the same village; four newly furnished houses for the villages of Chartar(2), Qrasni and Vank, and the major renovation and reconstruction of the school at Nalbantyan village. The latter, by far the largest project ever undertaken by Toronto, was named after benefactors Berjouhi and Armen Nalbandian.
Ambassador Yeganian bestowed the foundation’s “Benefactor” medals upon Nora Nalbandian-Gulesserian and Raffi Nalbandian for building two houses in Artsakh for needy multi-children families.

Keynote speaker and guest of honor, H.E. Grigor Hovhannissian, Ambassador Extraordinary and Plenipotentiary of the Republic of Armenia to the United States, delivered an eloquent speech addressing the independence of the twin republics as well as the role played by the Fund during the same period. Ambassador Hovhannissian, who had come to Toronto specifically to attend the fundraiser, thanked the audience for its generosity.

The fund-raising drive of the evening was kicked off by Houri Najarian, Vice-chair of the foundation. In addition to the record amount raised from the floor, a second record was set by donations throughout the year.

Thanks to a generous donation by Sarkis Yacoubian, a long time supporter of the Fund, students from local universities were attending the event for free and a lottery was drawn sending two of them to Armenia, attracting the cheers of an enthusiastic audience. One of the highlights of the evening, was the auctioning off of an autographed climbing sweater of Ara Khatchatourian, the first ever Armenian who conquered Everest in May of this year.

Closing the program, Migirdicyan thanked the donors and told the audience that thanks to the money raised in Toronto the chapter will embark upon at least nine more projects by building a Medical and Community Centre for the Khntzorisdan village; completing a similar centre for the Ivanyan village already in the works; three sanitary stations for Shushi, Amaras and Tadi Vank, three new houses for multi-children needy families in Artsakh, and a new school for the village of Ughdasar, bringing the Toronto project total to 63. It is expected that the new projects will be completed in 2017-2018.

The fund-raising will continue to raise the record sum to grow even further.
Hayastan Foundation Toronto is an independent Canadian charitable organization building humanitarian projects.