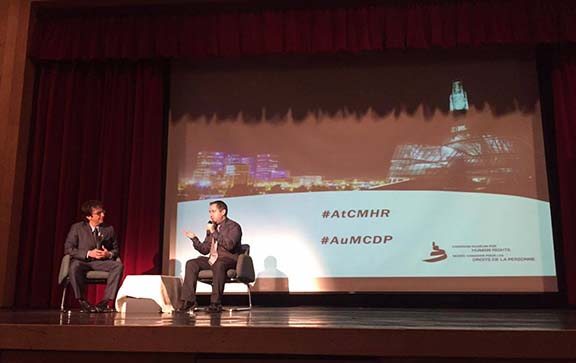 In partnership with the Canadian Museum for Human Rights (CMHR), on October 13th, 2016, the Armenian National Committee of Canada co-organized the premiere of the museum’s new film about the Armenian genocide, “Acts of Conscience: Armin T. Wegner and the Armenian Genocide”.

The event that took place at the Armenian Youth Centre of Toronto, attracted hundreds of community members and supporters of the ANCC and CMHR. The event was also attended by Peter Farenholtz, Consul General of Germany in Canada, MP Arnold Chan. Member of Parliament for Scarborough-Agincourt and Chair of the Canada-Armenia Parliamentary Friendship Group, Councillor Jim Karygiannis, Toronto City Councillor, TDSB Trustees and a large number of activists.

After the screening of the documentary, the event featured a discussion with renowned Canadian filmmaker Atom Egoyan, who narrated the short documentary that will play in the Museum’s “Breaking the Silence” gallery.

Subsequently, remarks were delivered by CMHR president and CEO, John Young, MP Arnold Chan – who also read a statement from prime minister Justin Trudeau – and Councillor Jim Karygiannis, Toronto city councillor. Closing remarks were delivered by ANCC president, Shahen Mirakian. In his remarks, Mirakian said that it is only through our concerted efforts that we can stay true to our commitment and carry on the legacy of Wegner by standing up against any forms of injustice towards humanity.

The film, Acts of Conscience, looks at the genocide through the lens of Armin T. Wegner, a German war medic who photographed and documented atrocities against the Armenian Christian minority that were occurring around him in the Ottoman Empire during the First World War – including forced “death marches” through the desert. In the 1930s, Wegner also voiced his opposition to the anti-Semitic policies of the Nazis and authored an impassioned plea to Hitler on behalf of the Jews of Germany.

Compelled by his conscience to take action despite great personal risk, Wegner’s story epitomizes the importance of efforts to combat the denial and minimization that often surround gross human rights violations.