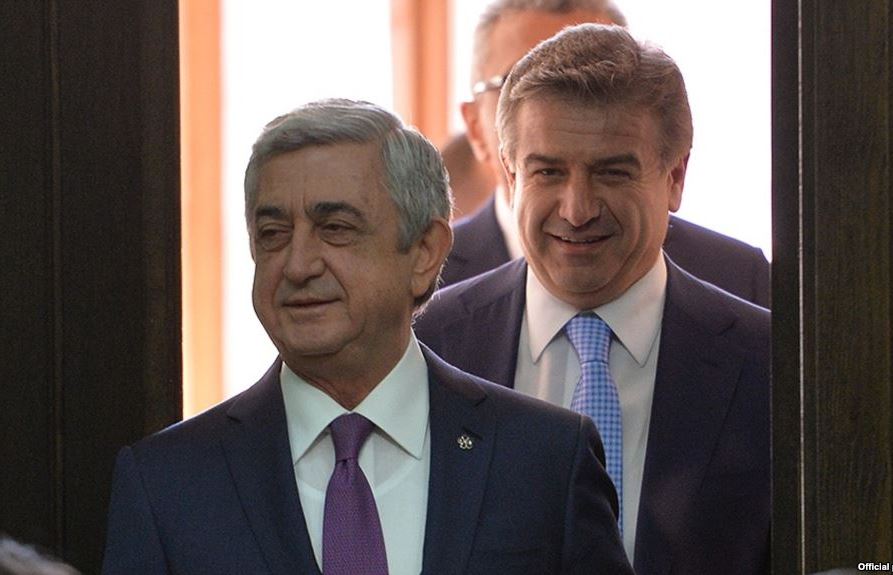 (Azatutyun). President Serzh Sarkisian insisted on Thursday that he continues to fully support Prime Minister Karen Karapetian amid lingering media speculation about friction between them.

But he again declined to clarify who will be Armenia’s prime minister after he completes his second and final presidential term next April.

“Our team will act in a unified way in the executive and legislative branches as well as local government bodies,” Sarkisian said, opening a weekly cabinet meeting in Yerevan. “The current government headed by Prime Minister Karen Karapetian enjoys the full trust of myself and our entire political team.”

A number of Armenian media outlets and commentators have speculated in recent weeks that Sarkisian plans to become prime minister or replace Karapetian by someone else in April 2018. Some of them have claimed that Karapetian will be sacked before that time because of his worsening relationship with the president.

Sarkisian dismissed those rumors as “untrue” on June 6. “The prime minister has no reason to resign,” he said in rare comments to Armenian journalists.

Karapetian likewise denied a rift with the president on June 12, saying that their relationship remains “very good, respectful and businesslike.” Speaking in the parliament on June 21, the premier stood by his previous statements indicating that he would like to retain his post next year.

Sarkisian, whose Republican Party of Armenia (HHK) won the April 2 parliamentary elections, has so far shed little light on his political plans for 2018. He did not comment on them on Thursday.

Sarkisian appointed Karapetian as prime minister in September last year with the stated aim of improving the socioeconomic situation in Armenia through more radical reforms. The 53-year-old former business executive has since repeatedly pledged to create a level playing field for all businesses, combat corruption and tax evasion, and attract large-scale investments in the Armenian economy. His action plan approved by the HHK-controlled legislature commits the government to speeding up economic growth and reducing poverty.

It’s Impossible to Reach any Agreement or Make Decision without Participation of Artsakh Side, Says Armenian FM