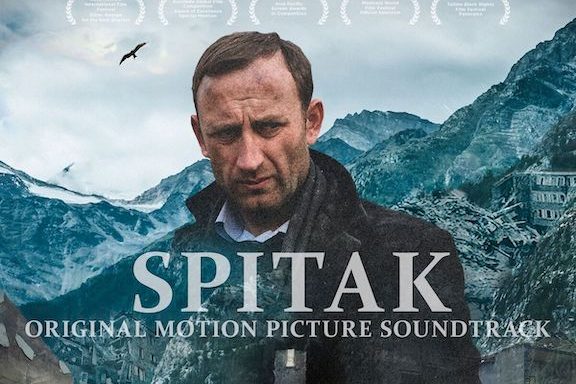 LOS ANGELES, “Asbarez”.–Grammy Award-winning and multi-platinum recording artist, songwriter, composer, poet and visual artist Serj Tankian will be releasing the soundtrack to award winning film Spitak via his own label Serjical Strike Records. This marks the fifth feature film with Serj Tankian at the helm as composer of the musical score. Spitak – Original Motion Picture Soundtrack is slated for a global release via iTunes, Spotify, Apple Music and other digital platforms worldwide on November 30.

Directed by the acclaimed Alexander Kott, Spitak tells a powerfully dramatic story of the true to life harrowing natural disaster of the Spitak earthquake that shook the country of Armenia on December 7, 1988. Kott himself described Spitak as “a requiem film,” through which he has attempted to convey “the panic, despair, courage and heroism” of survivors and global rescue workers who tirelessly sifted through rubble and destruction for weeks looking for additional survivors, loved ones and any semblance of their homes that suffered from the massive earthquake that took the lives of over 25,000 people nearly 30 years ago.

Using piano, strings and atmospheric orchestral elements, Tankian engages the somber tones of the film and its calamitous storyline with emotional grace that at times works to accentuate the sense of loss and desperation, while other times helps to ease the audience through distressing scenes.

“Spitak is a powerful film whereby one sees through the eyes of a man searching for his family through the devastated rubble of cities, in the aftermath of the 1988 earthquake in Armenia. It truly makes one feel vulnerable as this can happen to any family. The music is a minimalist requiem mixing with the sounds of the cranes and other machinery prevalent in rescue operation efforts,” said Tankian.

Spitak has been officially submitted by the country of Armenia as its official submission to the Academy of Motion Pictures Arts and Science for consideration in the foreign language film category for the 91st annual Academy Awards that will be held in Los Angeles on February 24, 2019. The film also has already received international accolades, including earning Alexander Kott a “Best Director” award at the 2018 Moscow International Film Festival.

The film will be released in the United States with a one week limited engagement at the Laemmle Theater in Glendale, CA beginning on December 7.

Tankian is a Grammy winning and multi-platinum recording artist, singer, songwriter, poet, visual artist, activist and composer. An Armenian born in Lebanon and re-rooted in Los Angeles, Serj was introduced to the melding of cultures, ideas and ideals from a very young age.

Tankian got his first opportunity to compose for film in 2006, when he was tapped by famed director William Friedkin to come up with a theme for his psychological thriller Bug. In the 8 years to follow, Serj was able to squeeze in a few shorter length compositions for film and TV projects in the midst of extensive touring cycles and solo album releases. With a need to be more creative with his musical talents, Tankian made a conscious decision in late 2014 to focus more on scoring for film, TV and video games. In 2015, he was brought on by independent film makers Garin Hovannisian and Alec Mouhibian to score 1915, starring Angela Sarafyan and Simon Abkarian. 1915 marked Serj’s first full film score, and he was intent on doing more. Over the past few years, additional credits include composing the film score for The Last Inhabitant, an original composition for Ilya Naishuller’s Hardcore Henry and video game musical scores for Midnight Star and its sequel Renegade, which were created by one of the chief creators of the famed Halo game franchise.

In 2017, he also recorded a modern version of Armenian folk song “Sari Siroun Yar” along with the Authentic Light Orchestra for The Promise, directed by Terry George, starring Christian Bale and Oscar Isaac. Tankian was also brought on by Survival Pictures, the producers of The Promise, to serve as an Executive Music Consultant on the film. Also in the same year, Serj Tankian composed original musical scores for two feature length films, Intent To Destroy by award winning documentarian Joe Berlinger and Furious—The Legend Of Kolovrat, an epic Russian historical fantasy film set in the 13th Century. Both soundtracks were released by Lakeshore Records.

Early in his musical career, Serj found an outlet as the rabble–rousing lead singer and songwriter of the largely successful rock band System of a Down, a band that has reached into the hearts and minds of millions of people relaying multiple messages of love, awareness and activism. System of a Down has 5 studio album releases, three of which debuted at number one on the Billboard 200, and has also been nominated for four Grammy Awards and snagged one in 2006 for ‘Best Hard Rock Performance’ for their song “B.Y.O.B.”

Tankian has released 6 albums of his own solo material, beginning with 2007’s chart-topping hard rock album Elect The Dead and it’s symphonic counterpart Elect The Dead Symphony. His sophomore solo album Imperfect Harmonies was released in 2010, followed by Harakiri in 2012. 2013 saw two distinct releases from Serj, with the first being the critically acclaimed Orca Symphony No. 1, released in June of that year, followed up with the very unique Jazz-iz Christ one month later.