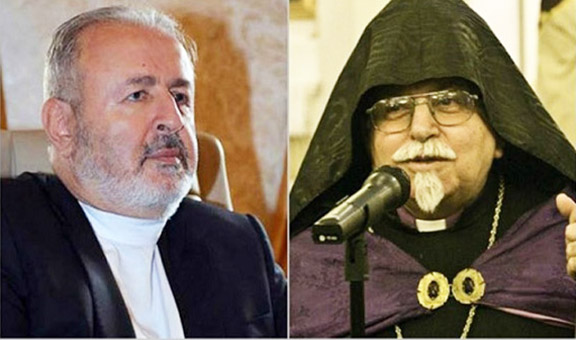 (A.W.)-The never-ending manipulations and power games at the Istanbul Patriarchate took a turn for the worse this week.

In 2008, the Istanbul Patriarch Archbishop Mesrob Mutafyan had suffered an incurable dementia disease, incapacitating him into a vegetative state. The cleric next in line at the Patriarchate, Archbishop Aram Ateshian was appointed the Acting Patriarch at that time, with the expectations that unless Patriarch Mutafyan recovers miraculously, elections should be held to decide a successor. For the past nine years, Acting Patriarch Ateshian resisted all attempts of the Istanbul Armenian community, other Patriarchate clerics and even the Echmiadzin Catholicosate, to hold the elections. Finally in March 2017, Arch. Ateshian relented the Religious Council of the Patriarchate to start the election process, which elected Archbishop Bekjian from the Diocese of Germany as ‘locum tenens’, a caretaker cleric until a new Patriarch is elected to replace the ailing Patriarch Mutafyan and the Acting Patriarch Ateshian. Both Ateshian and Bekdjian were supposed to be candidates in the elections, along with four other eligible clerics.

But now, following a meeting with the Turkish Minister of Interior and a letter received from the Istanbul Governor, the Religious Council of the Istanbul Patriarchate has declared that there will be no elections and Arch. Ateshian will continue serving as Acting Patriarch until Patriarch Mutafyan dies. Arch. Bekdjian has resigned and is on his way back to Germany. How is all this possible?

It is possible because Arch. Ateshian is a favourite of the Turkish government and the Turkish government returns the favour by calling null and void the election process and the selection of the ‘so called or alleged’ locum tenens caretaker Arch. Bekjian to oversee the election process, even though these are all spelled out in the legal authority of the Istanbul Patriarchate and the Lausanne Treaty defining the legal rights of the minorities to freely elect their religious leaders. But however the government, or more appropriately, the leader of the government President Erdogan interprets the laws, that is what counts. Arch. Ateshian is ‘proud to call President Erdogan as my brother’. Arch. Ateshian was a fierce critic of Germany for passing the Armenian Genocide resolution in June 2016. Arch. Ateshian wished Erdogan success in starting the Afrin invasion in Syria, killing Kurdish (and some Armenian) civilians. It is natural that the Turkish government will interfere to the benefit of an Armenian religious leader so much in line with its priorities.

I have had two occasions to communicate directly with Arch. Ateshian. First was when I planned to give a concert at the newly reconstructed Surp Giragos Armenian Church in Diyarbakir, during the Centenial Commemoration of the Armenian Genocide in April 2015. As part of the concert program, in addition to my piano performance of Armenian composers, I had proposed to invite a well-known Armenian and a Kurdish opera singer to present songs of Komitas, a noted victim of the Genocide. Arch. Ateshian opposed the idea of the concert in ‘his church’ and suggested that I hold the concert somewhere else in Diyarbakir. At the end, the concert did take place in the church of course, in the presence of more than a thousand attendees, including elected officials, local Kurds and Turks, but most significantly, hundreds of hidden Armenians. Instead of the two singers, I ended up playing the Komitas works in the church myself, so meaningful and symbolic, hundred years after the Genocide. The other occasion was when my friends and I approached him about the subject of the thousands of abandoned Armenian churches in Turkey. For a few years in the early 2010’s, there was a window of opportunity by an apparently liberalized Turkish government to allow return and reconstruction of Armenian churches. The reconstruction of Surp Giragos Church is one example, even though the situation has dramatically worsened in the past two years. But earlier on, there was some willingness by the government to return or restore Armenian churches, as our cultural heritage in Anatolia. We even had discussions with government officials on specific churches in Van, Sivas and Malatya.

Unfortunately, Arch. Ateshian turned down these attempts by stating:’ I (meaning the Patriarchate) cannot even take care of the Armenian churches in Istanbul, what do I need to have more churches in Anatolia?’ I am not sure whether to call this line of thinking shortsightedness or toeing the line in the eyes of the state. But my intention is not to blame Arch. Ateshian or the Turkish government that sees him as their man. I would like to focus on the attitude of the Istanbul Armenian community and more specifically, its non-religious leaders, who are the elected leaders of dozens of charitable organizations attached to the Istanbul Armenian churches, schools and hospitals. The charitable organizations are all supposed to be under the control of the Istanbul Patriarchate and act in unison, with the wealthier foundations owning large assets supposed to help the less fortunate foundations. But this rarely happens, and as long as there is no interference from the Patriarchate, most of the leaders, with a few exceptions, treat the charitable organizations as their own personal empire without much consideration for the overall benefit of the community. The community itself is deeply divided, apathetic or unable to voice any protest, except for a few young intellectuals gathered around the Agos daily and a few progressive NGOs.

After what happened this week at the Patriarchate, one would expect the community to organize and take some protest actions against the unilateral takeover by Arch. Ateshian. A possible protest action could have been boycotting the church where religious services were to be conducted by Arch. Ateshian and instead attend church services at other Armenian churches. But the church where he delivered mass was full this unday and there was only one lonely Armenian lawyer lady among the crowd who dared protest, by singing aloud a prayer “Der Voghormya.” Upon instructions from Arch. Ateshian, she was immediately removed from the church by Turkish police officers and taken to the police station.

As the saying goes, people deserve the leaders they have. While we lament and complain and protest against unfair treatment of Armenians by other nations, we should also recognize our own weaknesses.