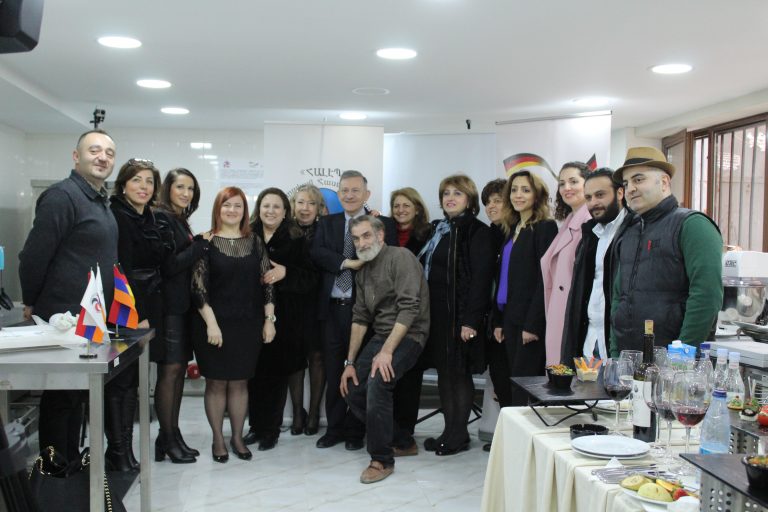 Donors pose with the management of the Aleppo Cuisine Center (Photo: Aleppo-NGO)

YEREVAN—After months of preparation, the Aleppo Compatriotic Charitable Organization (Aleppo-NGO), a Syrian-Armenian humanitarian relief group, is nearly ready to open its new Middle Eastern food-service center. Named “Aleppo Cuisine,” the center will be located on Koghbatsi Street in the heart of Yerevan.

In addition to a small on-site café, Aleppo Cuisine will offer catering and delivery services, and will produce a wide array of frozen foods for distribution to grocery stores and restaurants across Armenia.

Developed with the intent of providing jobs to individuals who fled to Armenia during the Syrian conflict, Aleppo Cuisine will also distribute a share of its profits to refugee families whose breadwinners are incapacitated by illness or disability, and will regularly donate food to vulnerable local populations.

Aleppo-NGO President Ani Balkhian relates that she and others at Aleppo-NGO had the idea for a cuisine center while considering ways to help refugees who arrived in Armenia via the NGO’s “Save a Life” program from 2015 to 2017. “We brought these people here,” Balkhian says, referencing Aleppo-NGO’s evacuation of hundreds of Armenians from Syria at the height of the conflict, “and we feel a responsibility to help them rebuild their lives.”

Vreij Kolandjian, parish council chairman of Houston’s St. Kevork Armenian Apostolic Church—who raised more than $120,000 for the “Save a Life” project—agrees that it’s imperative to focus on helping refugees adjust to their new home.

“Aleppo Armenians need jobs ahead of anything else,” he argues—especially women in the community, who stand to benefit the most from the “sense of security and self-accomplishment” provided by a job.

Two factors convinced NGO leaders that a cuisine center would be the best way to create jobs for Syrian Armenian refugees. First, they say, they took note of the rising demand for Western Armenian and Middle Eastern food in Armenia. Tsola Beshlian Vizoyan, Aleppo Cuisine’s prospective head chef, observes that “Syrian food has quickly become very popular in Yerevan. Over the past few years, locals have definitely developed a taste for it.” Evidence for her claim is scattered across the city: from Erebuni to Arabkir, more than 40 restaurants—the vast majority owned and operated by recent refugees from Syria—now focus on Middle Eastern cuisine.

As restaurateurs scramble to keep up with demand, Aleppo Cuisine’s large-scale production and distribution service will address major gaps in the market, increasing the availability of Middle Eastern and Western Armenian cuisine at catered events, grocery stores, and beyond.

The second factor that persuaded Aleppo-NGO to open a cuisine center was the skillset of the refugee population. “The women of our community,” says Harout Zoulamian, a member of Aleppo Cuisine’s leadership team, “are talented, energetic, and hardworking, and their culinary expertise is a great untapped resource. We are convinced that they can accomplish anything they set their mind to.”

Since December, Aleppo Cuisine’s prospective employees have participated in a variety of business, hygiene, and safety trainings, and are now concluding the preparation process with hands-on practice in a mock kitchen. Zoulamian notes that the women entered the trainings with a wealth of knowledge and experience regarding Middle Eastern cuisine. “They already knew how to prepare all of the dishes,” he says. “Ichli kufta, madzunov kufta, yalanchi, pastries, desserts, you name it—they can make it perfectly.” The trainings thus sought to draw on these existing skills and prepare the women to work as a team, to produce much larger quantities of food, and to meet uniform quality standards.

Balkhian elaborates: “You can’t teach someone how to fish in a desert. They also need access to water and access to tools. In contrast to many other training programs for Syrian refugees, this is the level of support Aleppo Cuisine Center will provide, offering a direct path to sustainable employment and income for some of the most vulnerable members of our community.”

Aleppo-NGO hopes to employ up to 25 Syrian-Armenian women and persons with disabilities within its first 12 months of operations, increasing to 70-90 within the first five years. Work hours will be personally tailored for each employee, allowing individuals with unpredictable schedules to participate. For many of the employees, the center will represent the end of a months-long—or even years-long—search to find a job that accommodates their family responsibilities.

In the words of Beshlian-Vizoyan, “A job is one of the most important ways someone can feel strong, one of the best ways to build dignity. So I have great hopes for this enterprise and the impact it will have on the women who participate. It’s proof that we as Syrian Armenians are not broken, that we’re still fighting, and that we have a fierce will to survive.”

The Aleppo Cuisine Center will be headquartered at 83 Koghbatsi Street, and is scheduled to open for business as soon as remodeling is completed—likely by the beginning of summer. The center’s space was bought thanks to a generous donation from St. Kevork Armenian Apostolic Church in Houston, Tex., supplemented by Robert and Nyree Österbauer-Tanielian of the United Kingdom. The kitchen, meanwhile, has been fully equipped with new appliances by GIZ, Germany’s flagship international development agency, as part of its “Economic Integration of Syrian Refugees in Armenia” (EISRA) program.

Aleppo-NGO’s leadership has ambitious plans for the cuisine center’s future. One hundred percent of the profits will be used for humanitarian relief assistance and re-investment into growth—hiring new employees, expanding services and increasing production amounts, and eventually opening a second location.

One day, Zoulamian says, Aleppo Cuisine’s products will be found throughout Armenia, and will even be exported internationally. “There are no limits in our minds as to where we can go.”