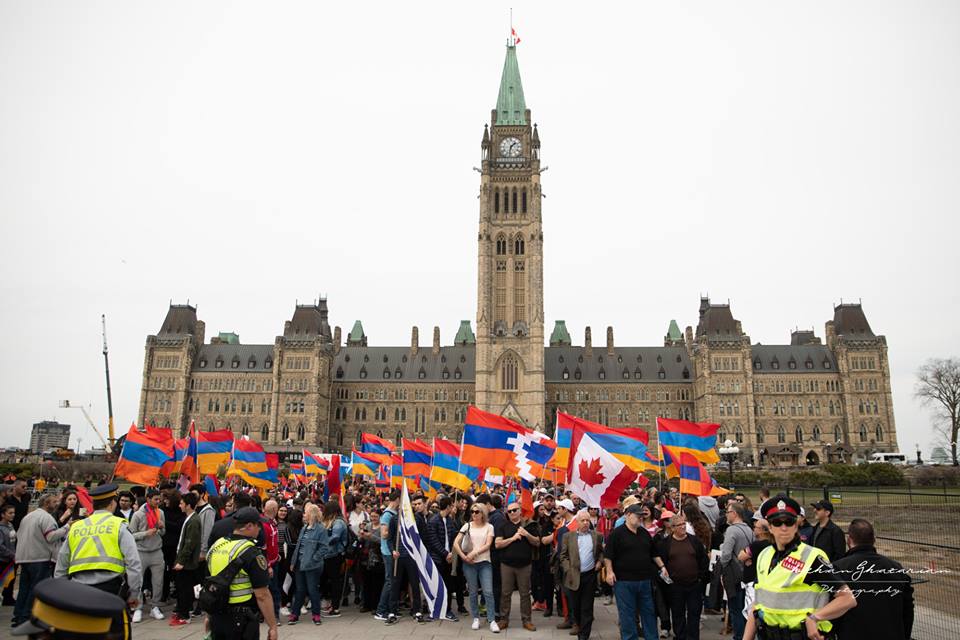 Thousands Canadian Armenians and their national and spiritual leaders rallied outside Parliament Hill in Ottawa, on Tuesday, to mark the 103rd anniversary of the Armenian Genocide. Thousands of Canadian Armenians gather at the Parliament Hill on April 24, 2018.

During the official rally in front of the Parliament Hill, many federal politicians and Armenian ambassador took to the stage and conveyed words of support.

Few hundred Turkish Canadian protesters were gathered just metres away on the Parliament lawn’s other side, separated from the Armenians by temporary steel barricades. The Turkish protesters shouted anti-Armenian slogans.

After the commemoration at the Hill the demonstrators headed in front of the Turkish Embassy as a protest to the Turkey’s denial of the Genocide. Minister of Canadian Heritage Melanie Joly speaks during a commemorative rally of the 103rd anniversary of he Armenian Genocide at the Parliament Hill, April 24, 2018.

Dignataries and youth representatives spoke about the importance of continuing the struggle to remember and never forget.

Canada is among more than 20 nations that have recognized the slaughter of Armenians in 1915 as genocide in a motion passed in the House of Commons in April 2004 which reads “This House acknowledges the Armenian genocide of 1915 and condemns this act as a crime against humanity.” Demonstrators line the streets of Ottawa heading towards the Turkish Embassy, April 24, 2018.