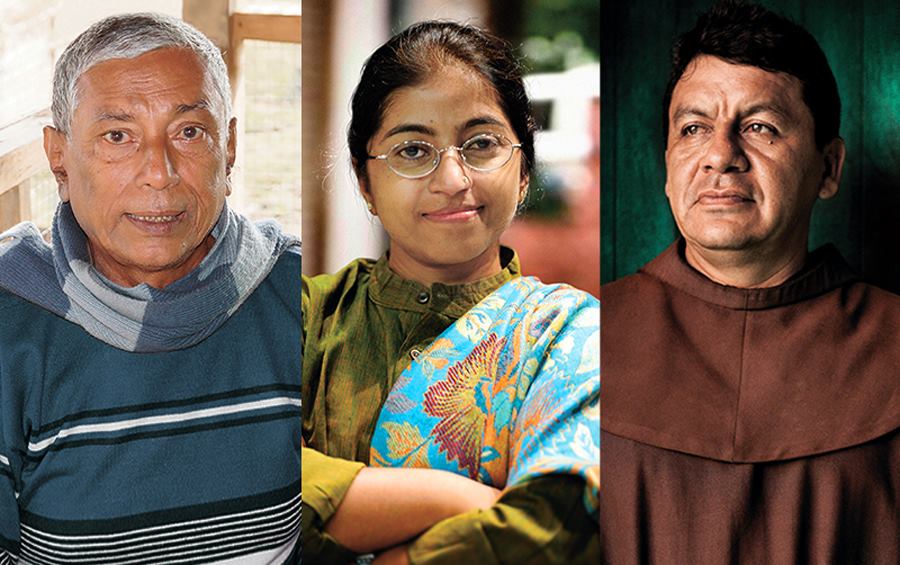 The Aurora Prize for Awakening Humanity recognizes three humanitarians for their selfless commitment to fighting sexual violence in India, advocating on behalf of Rohingya people in Myanmar and protecting Central American immigrants in Mexico

YEREVAN – The Aurora Prize for Awakening Humanity Selection Committee announced on April 24 three humanitarians as potential recipients of the 2018 Prize. Each individual was chosen for their exceptional courage, far-reaching impact and endless commitment to preserving human life and advancing humanitarian causes in the face of adversity. The Aurora Prize, granted by the Aurora Humanitarian Initiative on behalf of the survivors of the Armenian Genocie and in gratitude to their saviors, named:

Mr. Kyaw Hla Aung, Lawyer and Rohingya Leader, Myanmar – A Rohingya Muslim who, despite being imprisoned for a collective 12 years for peaceful protests against systematic discrimination and violence, uses his legal expertise to fight for equality, improvements in education and human rights for his community. He has nominated international organizations that provide medical aid and assistance to refugees in Myanmar.

Fr. Héctor Tomás González Castillo, Founder of La 72, Mexico – A Franciscan friar who has provided shelter, food, water, counseling and legal assistance to more than 50,000 Central American immigrants along their often-harrowing journeys through Mexico, providing aid to all, including those who suffer traumatic attacks, attempted kidnappings and expulsions from their own countries. He has nominated organizations working to promote human rights for those living with HIV/AIDS and to provide cultural education to Mayans in Mexico.

Mrs. Sunitha Krishnan, Co-Founder of Prajwala, India – A gang rape survivor turned women’s rights advocate who used her trauma as motivation to rescue, rehabilitate and reintegrate victims of sex trafficking and forced prostitution back into society, creating an organization that has positively impacted the lives of more than 17,800 women and children. She has nominated organizations that fight gender imbalance and sexual violence and trafficking throughout India.

The three humanitarians will be honored at the third annual Aurora Prize Ceremony in Yerevan, Armenia on June 9, 2018. Of the three nominated, one will be chosen as the 2018 Aurora Prize Laureate at a ceremony on June 10, 2018. The Laureate will receive a grant of US$100,000, as well as a US$1,000,000 award, giving them the unique ability to continue the cycle of giving by supporting organizations that have inspired their work.

“These are Humanitarians who sacrifice so much on the front lines of today’s most desperate humanitarian crises,” said Vartan Gregorian, Selection Committee Member, President of the Carnegie Corporation of New York and co-founder of the Aurora Humanitarian Initiative, speaking on behalf of the Selection Committee. “Although from vastly differing circumstances and locations, these Aurora Humanitarians exemplify a universal capacity to protect the most vulnerable. Armenians suffering in the Genocide one hundred years ago were the beneficiaries of the ultimate expression of this universal capacity. Aurora’s goal is to recognize that expression, to commend these risk-takers and to honor their commitments, so that as we pay tribute to their journeys, we continue the cycle of gratitude and giving.”

The 2017 Aurora Prize was awarded to Dr. Tom Catena, an American Catholic missionary working as the sole surgeon in the war-ravaged Nuba Mountains in Southern Sudan where humanitarian aid is restricted. “Dr. Tom,” as he is known locally, has been on call 24 hours a day, seven days a week at the Mother of Mercy Catholic Hospital serving a community of more than 750,000 people in the 500-bed hospital. On any given day, Dr. Tom treats patients for ailments ranging from bombing attack injuries to malaria, malnourishment, leprosy and beyond.

Marguerite Barankitse from Maison Shalom and REMA Hospital in Burundi was named the first Aurora Prize Laureate in 2016. Ms. Barankitse has spent the last 20 years providing safe haven for orphans and refugees escaping violence and abuse during her country’s civil war. Since becoming the inaugural Laureate, she has supported 11 initiatives across five countries, advancing education for Burundian refugees, empowering women, girls and victims of sexual assault, and rehabilitating refugees and victims of human trafficking.

The 2018 Aurora Prize Laureate will be named at the close of a weekend of events that include the annual Aurora Dialogues. The Dialogues are an international forum where leaders from the humanitarian and business communities will convene to discuss ways the global community can incite meaningful action to solve some of the world’s most pressing problems. This year’s Dialogues will feature conversations with the three Humanitarians who will share their passion and their personal stories.