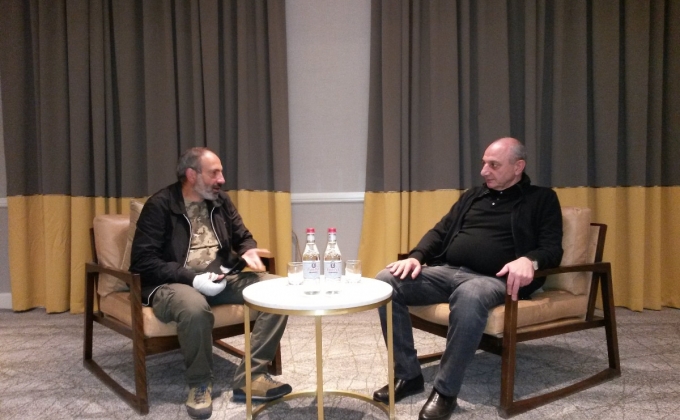 The two men were due to meet on Wednesday morning to discuss ways of defusing the tensions after the resignation of Prime Minister Serzh Sarkisian.

Karapetian announced that the meeting has been cancelled because “Nikol Pashinian has unilaterally put forward new demands relating to the format, agenda and media coverage of the meeting.”

“The latter has proposed a list of participants from our side and stated that he will be negotiating only over his agenda … Having some negotiating experience, I have never heard of negotiations held in such a format,” he said in a statement.

Karapetian added that he has therefore asked President Armen Sarkissian to initiate alternative negotiations of a broad range of political forces, including those not represented in the parliament. They would explore various options, including the conduct of snap elections, he stressed.

Pashinian confirmed the cancellation in a Facebook video address to supporters. He said he specifically demanded that the talks involve not only Karapetian but also parliament speaker Ara Babloyan and the parliamentary leader of the ruling Republican Party (HHK), Vahram Baghdasarian.

He also said the crunch talks must focus only on his demands for the appointment of an interim prime minister chosen by his movement and the holding of snap elections. In addition, he said, the talks must be held in the presence of journalists.

Pashinian warned that he will resume his “civil disobedience” actions if Karapetian and the HHK do not accept these conditions. He suggested that the ruling party is keen to hold on to power after Sarkisian’s resignation.

In the meantime, he said, his supporters should gather in Yerevan’s Republic Square on Wednesday morning to “discuss the situation and decide our further actions”

The recriminations came hours after the United States and the European Union renewed their calls for a political dialogue in Armenia.

“It remains imperative that the current situation is resolved swiftly and peacefully,” read a joint statement released by the EU Delegation and the embassies of EU member states in Yerevan. “A national dialogue involving all political stakeholders remains crucial.”