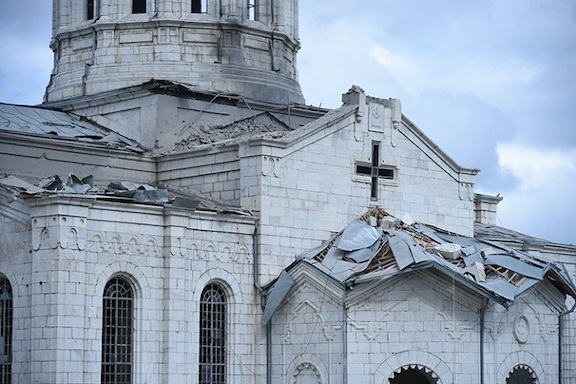 The bombing of Ghazanchetots Cathedral by Azerbaijan was cited by the U.S. Commission on International Religious Freedom

Thousands of Armenian cultural and historical monuments are under the threat of destruction by occupying Azerbaijanis, Artsakh’s Education Minister Lusine Karakhanyan told reporters in Yerevan on Tuesday when she presented an inventory of not just monuments but also the hundreds of thousands of books and other written manuscripts that are currently under Azerbaijani control after the surrender of territories.

“At the moment, the fate of about 2,000 monuments and reserves located in the territories controlled by Azerbaijan is under threat. I am talking about 2,000 architectural and historical monuments, 13 monastic complexes, 122 churches, 52 fortresses, 523 cross-stones (Khatchcars) and 4 chapels,” Karakhanyan revealed.

The Artsakh education minister stressed that Azerbaijan is pursuing an institutional policy of destruction, falsification, and substitution of the Armenian cultural heritage.

“During the war, we managed to evacuate some collections and valuables, but, for example, an art gallery, a historical museum, the storage warehouse of the carpet museum remained in Shushi (some of the museum’s exhibits were evacuated, but another 860 remained),” Karakhanyan explained.

She outlined that Azerbaijan is attempting to falsify information and label Armenian churches as being Albanian in origin as part of its state propaganda efforts.

“I believe that we have good scientific and historical basis that need to be properly promoted using all information platforms in order to be able to save our historical and cultural monuments,” she said.

Karakhanyan explained that a previously planned UNESCO monitoring mission scheduled for December 21ecalled that on December 21 was canceled by Azerbaijan.