Time to Cure Armenia from ‘Levon the Virus’ 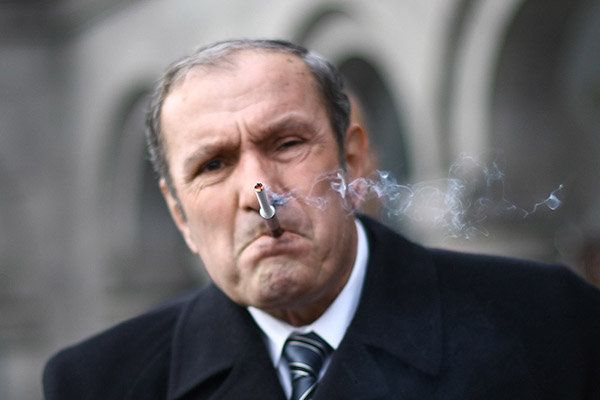 It is truly a sad reality that Levon Ter-Petrosyan’s name remains a relevant part of the Armenian political vernacular.

The first President of Armenia’s current Republic, who was forced to resign in 1998—two years after the first recorded rigged elections since independence from the Soviet Union in 1991—recently spoke at the Armenian National Congress’s convention, where he accepted to lead his party’s ticket in the upcoming Parliamentary elections scheduled for April 2017.

“Ter-Petrosyan the President” was noteworthy as arguably the most unpatriotic of leaders Armenia has ever had, while at the same time being a dream for foreign powers wanting to influence the future of Armenia and Artsakh (Nagorno-Karabagh/NKR).

First, to the delight of these foreign powers, he displayed an open preparedness to hand back Armenian-liberated Artsakh territories without any prerequisite acknowledgement of independence. This act of benevolence would be in exchange for “peace” and “good neighborly relations” with Turkey and Azerbaijan.

Second, to pave his path to deliver such an unacceptable policy to the Armenian world, he expelled the Armenian Revolutionary Federation (ARF) and imprisoned the party’s members. This was despite the fact that the ARF was and remains the largest political party in the seven million-strong Armenian diaspora.

Finally, his falling out with Artsakh war veterans (including his successor Robert Kocharyan), who were gaining additional political influence in Armenia, led to his forced resignation.

Ter-Petrosyan, reincarnated once again (the last incarnation led to the deadly protests of 2011), rose to the podium his party’s convention, to outline the Armenian National Congress’s policies for the Parliamentary elections. His leadership of the Congress ticket means that he would become Prime Minister should his party win in April 2017—a position that would be critical by April 2018, when the Presidency evolves into a mere ceremonial role under Armenia’s adopted constitutional reforms.

For this return to political life, one would have thought that Ter-Petrosyan would have learned from his past experiences. One would have hoped that he would have a better reading of his constituents’ will after the unification of the Armenian world when Azerbaijan attacked Artsakh in April.

Well, if one thought and hoped for these things, one would have been very disappointed after listening to his 57-minute speech.

In this speech addressed to party faithful, Ter-Petrosyan decided to defend his legacy, particularly his “peace now” initiative, which was peace with Azerbaijan regardless of the cost of independence for Artsakh.

He said: “Had we gone down the path we suggested in 1997, which is the same proposal currently on the table [by major powers at the insistence of Azerbaijan], we would be living in a prosperous Armenia today…. The day after signing such an agreement, our relations with Turkey would be back on track with open borders. We would have no fear of war.”

According to Ter-Petrosyan, the proposal suggested in 1997 and again on the table today for President Serzh Sarkisian to consider, is the return of the Nagorno-Karabagh Republic to the state of Azerbaijan. This would ensure a return to diplomatic relations between Armenia and Azerbaijan, and a subsequent negotiation for what comes next.

The best case scenario of “what comes next” for Armenians is apparently a future referendum on an unspecified date, which would grant Artsakh some level of autonomy ultimately under Azerbaijan’s rule. Or, if the Armenian side is very lucky, the referendum could grant Artsakh the independence that it currently already has.

Luck, however, will likely not come to fruition, as Azerbaijan will seek to include Azeri votes to skew the results of any such referendum towards its favor.

Ter-Petrosyan added: “The primary reason that citizens are emigrating from Armenia in droves is the threat of continued war rather than the social or economic issues facing the country, such as corruption.”

He dismissed individuals and parties who have a more patriotic approach to the future of Artsakh as “not-one-inch of land-ers” («ոչ մի թիզ հողականներ»), referring to those on the farthest extreme from himself, who say that they refuse to give up any inch of the liberated territories to Azerbaijan. Ter-Petrosyan ignores this group as “impossible dreamers.” He paints himself as the “realist.”

Away from Ter-Petrosyan’s virtual realism and in reality, there is a majority in Armenian public life who sit somewhere in between the two extremes of “Levon the foreign power’s ideal mouthpiece” and the so-called “impossible dreamers who will give up nothing.” The argument in the middle seems to settle on a point that negotiations for land exchange will begin once Azerbaijan has formally recognized the independence of Artsakh. This guarantees Artsakh’s right to self-determination and verifies its current independence.

Despite this being the most consensual position in the public debate, it was not even presented by Ter-Petrosyan in his speech. He preferred to read from the script of the foreign powers, being guided by their petro-dictator partner and serial-butcher of Armenians in Artsakh, Azerbaijani President Ilham Aliyev. At one point, Ter-Petrosyan even referred to Aliyev as “a rational-thinking political operator”.

Many may smile in the belief that this diatribe by Ter Petrosyan at his party’s convention tucks him into the corner of irrelevance in the eyes of the Armenian voters. There is definitely an argument to be made there, as most Armenian voters do not trust Ter-Petrosyan and recognize him as the founding father of rigged elections, while a majority have raised their collective voices at any weakness in any Armenian administration’s position regarding Artsakh.

However, Ter-Petrosyan was not pitching to Armenian voters. He was pitching to foreign powers, like the United States and possibly Russia, who would love to have a leader ready to read their scripts when sitting in Armenia’s seat at the Artsakh negotiation table.

While these powers do not get a literal vote in Armenian elections, they have shown they can sway elections in many smaller countries that are not their own. They have been flexing their muscle in Armenia in anticipation to organize and support a leader fitting Ter-Petrosyan’s mold; one who will destroy the liberation of Artsakh with a promise of “peace now, and then perhaps something else later… or perhaps not.”

Ter-Petrosyan is a political virus and one cannot afford to underestimate viruses.

Armenia must unequivocally reject Levon Ter-Petrosyan once again, and this time embarrass him into a final, irrecoverable defeat.