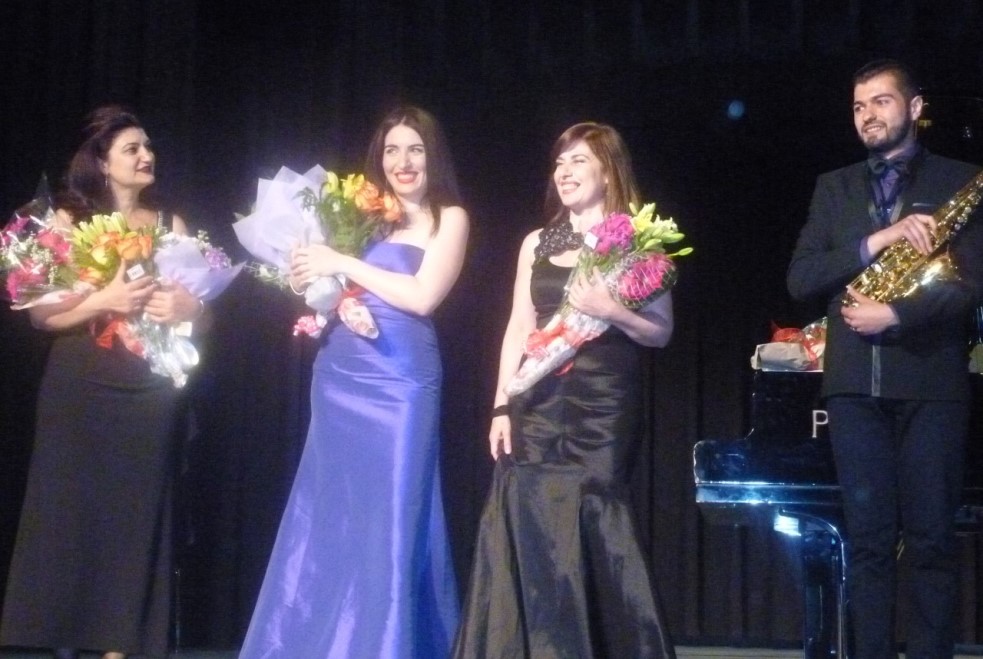 Ms. Grigoryan was not the sole artist on the Toronto AGBU stage on the evening of June 15th. Joining her were two other astonishingly gifted pianists, Sona Barseghyan and Narine Mardoyan, as well as the prodigious saxophonist Ara Arakelyan. TorontoAGBU chairperson, Mihran Egavian, in his introductory address remarked that although it was Ms. Grigoryan’s first visit to Toronto, the other performers on the program had graced the Toronto AGBU stage on other memorable occasions; all part and parcel of the AGBU’s mission of commitment to Armenian art and culture as well as the support and promotion of its talented artists.

The evening began with Ms. Grigoryan’s unabashed recounting, in pictures and words, of Aram Khatchaturian’s Armenian roots and their influence and inspiration in developing his talents, which ultimately earned him the esteem of his peers, the admiration of numerous illustrious personages, plus countless fans around the world. And in taking the spectator on a tour of the Aram Khatchaturian Museum in Yerevan using visual aids, Ms. Grigoryan reinforced her theme of the magnificence and uniqueness of this great composer. However, in the midst of her presentation, the unforeseen happened, a power failure.

After a brief hesitation, Ms. Grigoryan, undaunted, continued with her presentationsans visuals and microphone. The large crowd in the Babayan Hall applauded her perseverance. She then went to the piano to continue with a performance of the beloved Komitas song, Krounk. In the dark, without any visual distractions, the power of the music somehow became even more poignant, more soulful, more meaningful. The audience was enthralled. Ms. Grigoryan’s beautiful interpretation was just the beginning.

Other exquisite renditions on the piano, mostly Khatchaturian compositions, followed, with Ms. Grigoryan performing duets with Ms. Mardoyan and then Ms. Barseghyan. And all of a sudden the lights came back on. The audience gasped. Oblivious to it all, the performers continued playing. Now the audience could see them swaying to the rhythm of the music as if it had cast a spell on them; their expressions reflecting every nuance of the composition. We too were transported into the melodies. They conjured up thoughts and feelings of the past and of memories to be made.

A new sound came on the scene with the masterful performance on the saxophone by Mr. Arakelyan. Whether he accompanied Ms. Barseghyan or Ms. Grigoryan, the effect was the same, bewitching.

Although the evening’s four performers are all serious professionals, they also demonstrated a charming sense of humour when, in their finale, Mr. Arakelyan, playing the role of a villain, unexpectedly charged on the stage brandishing a fake sabre, purportedly to attack the ladies. They, in turn, feigned shock and fear reminiscent of scenes in silent movies. At that time the ladies precipitated to the piano and Mr. Arakelyan picked up his saxophone and they all began to play, delighting the audience with a spirited rendition of Khatchaturian’s Sabre Dance. They received a prolonged standing ovation and kudos at the end of their performance.

At the onset of the program, Ms. Grigoryan had mentioned that Khatchaturian had wanted the world to learn about and to love Armenian music as he did. This unforgettable concert and its stars did just that; they made us love their performances, the music they played and so much more.

A Brief Global History of Genocide, Crimes Against Humanity and Human Rights