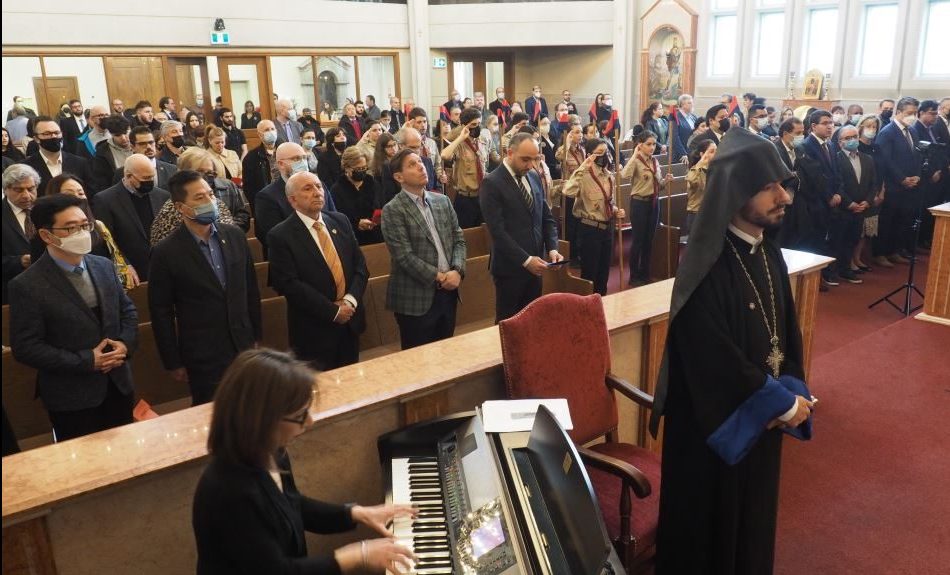 Dignitaries, guests and supporters at the commemoration event

Toronto –The Toronto-Armenian community gathered at the St. Mary Armenian Apostolic Church on Saturday, April 23 to commemorate the 107th anniversary of the Armenia Genocide.

The event was attended by representatives from all levels of government from across the Greater Toronto Area as well as representatives from the diplomatic core of the Republic of Armenia and Lebanon, and clergy and leaders of the Armenian Churches and Organizations in Toronto.

The Honourable Dr. Helena Jaczek, Member of Parliament for Markham-Stouffville and the Minister responsible for the Federal Economic Development Agency for Southern Ontario delivered the message on behalf of the Government of Canada. Mr. Aris Babikian, MPP for Scarborough Agincourt delivered a message from the Province of Ontario. Mayors John Tory and Patrick Brown spoke on behalf of the cities of Toronto and Brampton respectively.

Messages were also delivered from the Official Opposition in Canada, the Conservative Party, the Federal NDP, as well as the the Official Opposition in Ontario, the Provincial NDP as well as the Liberal Party of Ontario. Also in attendance were several Members of Parliament, Members of Provincial Parliament, city councillors, public school board trustees, candidates for the upcoming Provincial election in Ontario, and long-time friends of the Armenian Community in Canada.

In her opening remarks on behalf of the Armenian National Committee of Toronto, Ms. Rosalie Wannes stressed the importance of holding the perpetrators of the Armenian Genocide accountable. She said that the act of denial not only revictimizes the descendants of genocide survivors, but it also emboldens the perpetrators to continue with their genocidal policies for decades to come.

“Not only has the Government of Turkey not recognized the crimes of its past, with its active participation in the 2020 war against the Republic of Artsakh, it has made it clear that the extermination of the Armenian people continues to be its state sponsored priority to this date.” she added.

Ms. Wannes also drew attention to the ongoing aggression by Azerbaijan at the borders with Armenia and Artsakh. She stressed, “Azerbaijan continues to use violence at the border and the threat of yet another war as a means to dictate terms with the government of Armenia…Further weakening and delegitimizing the status of Artsakh today is a red line that Armenians cannot accept. Crossing this red line will lead to irreversible disaster.”

Member of the Armenian Youth Federation of Canada Mr. Sarkis Kelebozian, delivered Armenian National Committee of Toronto’s message. “As descendants of survivors, whose ancestors were victims of the 1915 Armenian Genocide perpetrated by Ottoman Turkey; we are acutely aware of the dangers of remaining silent and indifferent in the face of injustice,” said Mr. Kelebozian. “Turkey deliberately conspired with Azerbaijan, during the 44-day war in 2020, to launch an unprovoked war against Armenians in Artsakh by recruiting, training, arming and deploying jihadist mercenaries to capture territory inhabited by Armenians for centuries… the international community’s muted reaction to Turkey and Azerbaijan’s military aggression against Armenians was a bellwether for future acts of aggression around the world, for years to come.

The event ended with laying of wreaths and flowers at the Revival monument dedicated to the victims of the Armenian Genocide.

Historians estimate that more than 1.5 million Armenians were killed by Ottoman Turkey between 1915-1923.

The Canadian government has recognized this Genocide through multiple resolutions and statements, including when the House of Commons unanimously passed Motion M-587 designating April 24th as Armenian Genocide Memorial Day and the month of April as Genocide Remembrance, Condemnation and Prevention Month.